Our world-class education in the most stylish travel hot spots to visit this year. 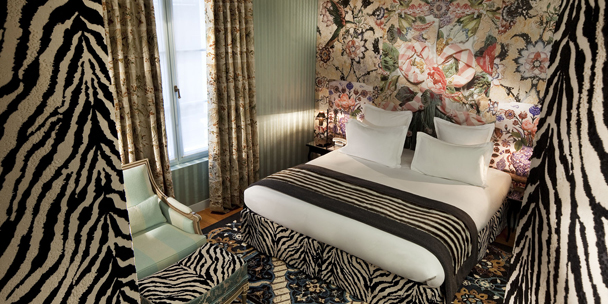 Like a carry-on that doubles as a stylish day bag, fashion and travel were made for each other. So naturally, when scouting the best travel hot spots to visit in 2013, we selected cities that offer the latest in fashion, art and gastronomic ventures—plus a sweet hotel to retreat to at night. The world is your oyster (read on for where to find this fabulous travel destination for Parisian foodies).
Bon voyage!

Why now: You, the Annas (Wintour, Dello Russo) and pretty much every international fashion editor and street style photographer has their eye on the City of Lights (if not their lens) for the nine days of fall collection debuts from the French-based fashion houses that’s fashion week.

While you’re in town: Visit the
Paris Haute Couture exhibit at L’Hôtel de Ville de Paris (March 6 to July 9) on the historical fashion front. And afterward, grab a bite at Le Mary Celeste (1, rue Commines), the newly opened oyster-and-wine bar—a gastronomic first—founded by the New York expats who also brought a taqueria and hot dog joint to the city of baguettes and fine
vin.

Why now: The second season of World MasterCard Fashion Week at the David Pecaut Square is underway come March (18 to 22). As well, the
Roger Vivier: Process to Perfection exhibit at the Bata Shoe Museum (327 Bloor St. W.) until April 7 has inspired haute dialogue in the city, with a lecture series and screening of fashionable films from the 1950s, like
Silk Screenings (March 21), which provides a backdrop to Vivier’s Paris.

Where to stay: The freshly reopened Four Seasons Hotel Toronto breathes new life into the buzzing Yorkville stretch and builds on the city’s allure as one of Canada’s must-visit travel hot spots, featuring a 30, 000-square-foot spa for relaxing, and ultra-swank bar for unwinding with a drink against the floor-to-ceiling window backdrop.
60 Yorkville Avenue, Toronto. fourseasons.com/toronto

While you’re in town: Come for the world premiere of
Game of Thrones: The Exhibition (March 9 to 16) at the Design Exchange and interact with costumes and props from the show. Then stay for the Christian Louboutin luxe footwear exhibit this summer (June 21 to September 15, also at the Design Exchange).
234 Bay Street.

Why now: A fashionable experience all around, arrive in style with a Finnair aircraft retrofitted with the prints and dining ware of the splashy iconic Finnish fashion and homeware brand Marimekko. Part of three-phase luxe overhaul, Finnair has outfitted Helsinki Airport with two new swank lounges and the entire cabin crew with uniforms by designer Ritva-Liisa Pohjalainen.

Where to stay: Indulge in some old world European charm at Hotel Kämp, which celebrated its 125th anniversary last year. The luxe hotel is perfectly located in the Kluuvi shopping district, which serves up local Finnish designs and market fare. Unwind with a signature hot stone massage at the hotel’s Kämp Spa, then nibble on Asian finger-food cuisine at the restaurant YUME. Kluuvikatu 2, 00100 Helsinki. Hotelkamp.com.

While you’re in town: Dive into a Russian fairytale with the Firebird and Snow Maiden exhibit at the Helsinki Museum of Art (on until May 26), featuring classic Russian paintings of Mikhail Vrubel’s The Swan Princess and Viktor Vasnetsov’s The Snow Maiden and Alyonushka, along with illustrations and theatrical sketches.

Why now: OK, we get it. This goes without say: and while many of the hottest New York labels are available (thankfully!) through e-commerce vessels, brick-and-mortar high fashion shops are valiantly staking their claim in the Big Apple. Balenciaga just opened a pop-up shop in SoHo and Massimo Dutti opened their New York flagship at 689 Fifth Avenue late in 2012. We hear Proenza Schouler is scouting downtown for its second NYC location.

While you’re in town: The grunge! The mod looks! This spring is a little more badass, wouldn’t you say? How fitting then that PUNK: Chaos to Couture, opens May 6 at the Metropolitan Museum of Art Costume Institute, highlighting the intersection of Dada and postmodern art movements with equally fierce fashion players. Start spreading the news…