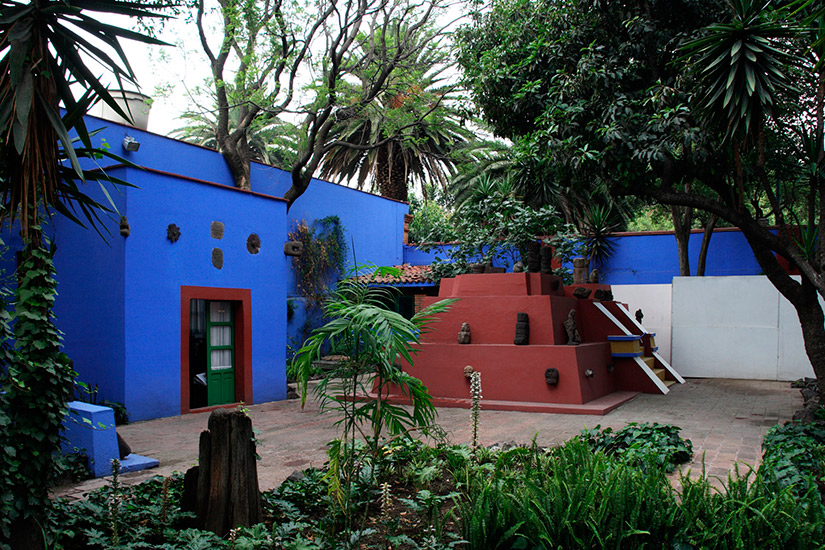 I’d never craved a vibrant wardrobe—historically, the brightest colour in my closet has been grey—until I visited Frida Kahlo’s house in Mexico City. Located in the artistic district of Coyoacán, Kahlo’s lifelong home, which is known as La Casa Azul for its cobalt-blue exterior, is a celebration of the late painter and political activist’s life and oeuvre. Every day, throngs of Kahlo enthusiasts explore the museum’s rooms, eager to absorb her brilliance, which is echoed in the blue-and-yellow-tiled kitchen, the vivid self-portraits hanging on the walls and her enviable closet. (The latter has inspired the fashion world too, most recently the Cushnie et Ochs and Roland Mouret spring 2018 collections.) As I walked its halls—making a mental note to hit the boutiques later—I wondered what Kahlo would say if she could see the international spotlight now shining on her and her home city.

Thanks to artists like Kahlo, Mexico’s capital has long been a creative hub. But, like craft beer at a wine bar, this influence was often overlooked by the rest of the world. Now we are paying attention, especially given the city’s status as the World Design Capital of 2018. This nod from the World Design Organization is basically a giant gold star for the creative-based urban renewal that has been happening here over the past decade. Think affordable housing by edgy architects like Frida Escobedo, investment in green space and tech, and burgeoning art and food scenes.

For travellers like you and me, that means lots to see and do (and eat). There are over 150 museums in the city—my fave was the Museo Soumaya, which boasts a curvilinear aluminum exterior as beautiful as the 66,000 works of art inside. There are also leave-you-breathless architectural projects such as the Torre Reforma (the tallest building in Mexico City) plus too many restaurants to count. “There’s a special vibe in the city,” says Emilio Cabrero, general director of Design Week Mexico and World Design Capital Mexico City 2018. “People are visiting the city for the gastronomy and the arts. The creative industry is not very well documented in Latin countries, but we want to make it a powerful tool for future generations.”

As neighbourhoods evolve, there has been a conscious effort not to bulldoze over the past. Rather, says Cabrero, the goal is to use design to transform the city “with respect to the traditions of Mexico and at the same time preserve what is valuable.” The result is a mash-up of old and new that feels unique. Residential Condesa (Mexico City’s version of SoHo) harbours an impressive collection of art-deco homes that have been transformed into cafés and bars, while the bustling Centro Histórico is lined with art-nouveau and neoclassical gems. Start off by admiring the orange-and-yellow dome of the Palacio de Bellas Artes (as well as the art collection inside), and then stroll by Casa de los Azulejos, a 16th-century building famous for its blue-and-white-tiled facade. Other spaces have been transformed into urban markets where gourmet tacos are snatched up like The Row at a sample sale. (Best bet: Casa Quimera in Roma Norte.) Inside the stables of a home designed by Luis Barragán, Mexico’s most influential architect, you’ll find Tetetlán, a multi-faceted space featuring a showcase for local designers and artists-in-residence, a yoga studio and a café. Finally, pop over to Roma, a barrio that feels like the Brooklyn of this capital city.

After touring Kahlo’s home, I was on a colour kick, so I headed a few blocks south to discover the mesmerizing markets of her neighbourhood, filled with rainbow piñatas, hot tamales and handcrafted voodoo dolls. It’s not just tourists who love Coyoacán; Mexican fashion designer Carla Fernández and her husband, artist Pedro Reyes, recently remodelled a home in the storied district, collaborating with artisanal craftsmen to incorporate old-world stonemasonry into the interior design. That passion for preserving traditional techniques extends to her work on her eponymous label. For the pieces, Fernández collaborated with weavers from Chiapas, an area of Mexico that designers are increasingly turning to for inspiration and production partnerships.

Like Fernández, many other designers express “made in Mexico” pride by combining craft techniques with global trends. Up-and-coming fashion designers like Armando Takeda and Alejandra Quesada collaborate with artisans from indigenous communities to accent their collections with hand-embroidered and ikat-patterned textiles. If your suitcase isn’t full from shopping in Coyoacán, head to Onora for handcrafted home decor and Cañamiel for high-end Latin fashion from locally loved brands. At the latter, I found a few colourful pieces to punctuate my notoriously neutral wardrobe. I’ll never abandon my love of black, but the next time I’m feeling adventurous (or missing the sun                        glistening over the Palacio de Bellas Artes), I’ll don my new yellow scarf and think of Mexico City and all that it inspires.