Inspired by the luxe glamour of The Great Gatsby? Our guide to travelling like a Jazz Age jetsetter in New York and Paris. 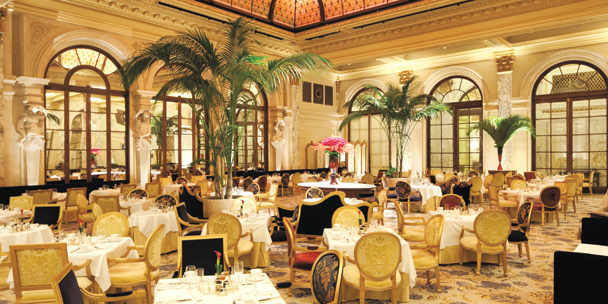 With his restless spirit and gift for glamour, F. Scott Fitzgerald left an indelible mark wherever he lived: New York, Paris, the French Riviera and Hollywood—all places where the beautiful people gather to cultivate their allure and spend their money. Burnished by heady, sudden success—This Side of Paradise (1920) made its author a star at 24— Fitzgerald and his wife, Zelda, were heralded as prophets of the emerging Jazz Age, embodying both the new wave of American celebrity and old-school European decadence. All the crazy stories about them were true. In New York, they dived into public fountains and rode on the rooftops of taxis to escape the heat. Once, in Los Angeles, they showed up, uninvited, at a party and barked at the front door on all fours until they were let in—and then Zelda went upstairs to take a bath.

They left a trail of champagne in their wake while creating a gilded ideal for North Americans who dreamed of the Old World while toiling in the new. It didn’t last. It couldn’t have. By 1940, Zelda was in a Swiss insane asylum and Fitzgerald was eking out a living as a script doctor in Hollywood. He died of a heart attack at 44; his last meal was a chocolate bar bought from Schwab’s Pharmacy on Sunset Boulevard. But first, before it all went wrong, there was New York.

Fitzgerald’s first love was Zelda; his second was New York. “We felt like small children in a great bright unexplored barn,” he wrote of the city. (Fitzgerald grew up in Minnesota and Zelda in Alabama; New York represented a rosy orb of style and endless possibility.) The Fitzgeralds married in the rectory of St. Patrick’s Cathedral on fabled Fifth Avenue, which was also home to The Plaza Hotel, the grand edifice bordering Central Park, where the couple visited the roof “to take leave of the beautiful city extending as far as the eyes could reach.” The hotel stars in Fitzgerald’s fiction, most memorably in The Great Gatsby (1925)—his 144-page account of the glory and horror of the American dream—where Tom Buchanan learns that his wife, Daisy, is in love with Gatsby. The result, predictably, is tragic.

The hotel, however, is still majestic. (It is also newly imbued with the Gatsby spirit to celebrate the release of Baz Luhrmann’s film.) I first read Gatsby when I was a teenager, and the descriptions of the hero’s parties made me hunger for grown-up glamour: “The cars from New York are parked five deep in the drive and already the halls and salons and verandas are gaudy with primary colors, and hair bobbed in strange new ways, and shawls beyond the dreams of Castile.” (What high-school keg party could compete with that?) The Plaza, too, assumed a mythical aura as a spot where stylish foursomes rented suites for an afternoon, smashed up their marriages and called down for buckets of ice to make mint juleps. Whenever I went to New York, I was too shy to visit in case it didn’t live up to the vision I’d nurtured over the years. I needn’t have worried. On a recent trip, I made the pilgrimage and fell in love.

SLIDESHOW: How to get perfect NEW YORK STYLE

Some hotels are all about cool luxury: minimalist white banquettes and green apples. The Plaza is defined by warm luxury: hyperbolic chandeliers and huge swaths of freesia by the front desk, where staff in pressed suits speak in low, reassuring murmurs. I loved the fairy-tale scale of it: the lobby with its uniformed bellhops, the bar’s 30-metre carved ceilings and high-backed velvet chairs where expensively-made-up women, Bergdorf bags at their feet, pick at Cobb salads.

“Let me tell you about the very rich,” Fitzgerald once wrote. “They are different from you and me.” At The Plaza, you feel that difference but in the best, most aspirational way. My suite came complete with monogrammed paper and “in residence” cards. I opened my windows onto a matchless view of Central Park as my butler wheeled in a silver tray flanked by a spray of orchids.

I reread parts of Gatsby that morning, moved once again by how Fitzgerald used gorgeous prose (Daisy’s voice a “deathless song”) to create a world, the implosion of which always leaves me yearning to return to its glittering, seductive surface. True glamour is like that: often fleeting, occasionally unforgettable.

Are you looking for the Gatsby experience? Find out where to stay and more on the next page…

SLIDESHOW: The top places to visit in NEW YORK CITY

SPA: At the on-site Caudalie Vinothérapie Spa, the focus is on special hang- over treatments, like the intensely hydrating Après Fête facial.

F.Scott and Zelda Fitzgerald roared into Paris in 1924, joining fellow Americans—including Ernest Hemingway, Gertrude Stein and Ezra Pound—in creating the most exciting literary expat community the world has ever known. Recreate the Fitzgerald experience by visiting both iconic and modern hot spots.

RELAX: The tiny tables outside the circa 1885 Café de flore—a fitzgerald favourite—afford the best people-watching in saint- Germain-des-Près, one of the city’s must-visit quarters.

STAY: The chic set flock to Hôtel Costes, a right bank It spot that is as celebrated for its lively courtyard as its opulent suites.

DRINK: More than 5,000 books line the walls of Les Éditeurs, a restaurant/bar with cozy red leather booths and a great cocktail list.

BROWSE: Shakespeare & Company, the jammed-to-the- rafters bookstore across from Notre Dame (see Midnight in Paris and Before Sunset), at- tracts today’s literary lights.