Inspired by the Women’s World Cup, UNICEF Canada recruits its own philanthropy troop. 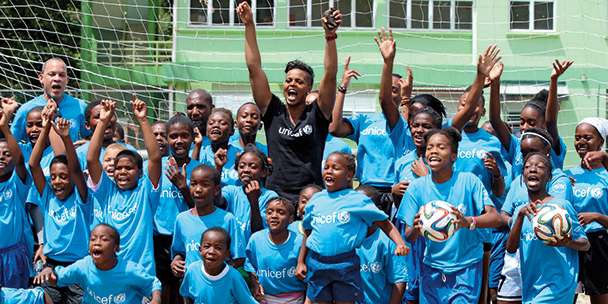 Call them the philanthropy squad. While they won’t be playing on any of the 24 soccer teams competing on the pitch in the FIFA Women’s World Cup happening across Canada this June, 26 Canadian women (and counting) have joined UNICEF Canada’s “25th Team” for a four-year journey of learning, advocacy and giving back.

With the world’s eyes on the largest women’s sporting event ever, UNICEF Canada ambassador Karina LeBlanc, who is training hard to play goalie for Canada in what will be her fifth World Cup (if she is selected for the team), wants to make sure that our nation makes an impression on and off the field.

“The legacy we, as a soccer team, want to leave is obviously to the sport, to play the best soccer. But we also want to inspire a nation, which is not exactly the easiest goal, you know?” she says. “With the 25th Team, it’s about women asking ‘What legacies do you want to leave?’ and using the resources they have and doing more than is comfortable.”

UNICEF Canada wants to increase the 25th Team to a roster of 60 Canadian women by the end of the year. It’s an exclusive club: Team members must commit to donating $25,000 a year to UNICEF Canada for the next four years.

The funds will be pooled to support a global project focused on child survival and five projects in Cambodia, Ethiopia, Indonesia, Namibia and Peru; each is focused on a specific maternal-, infant- or child health issue, such as birth registries. UNICEF Canada is also working with the Canadian government to have the government match the donations.

“If we can show that these pilot programs are successful, UNICEF will work with the local governments to ‘scale them up,’ which unlocks more funds,” says Sharon Avery, chief development officer for UNICEF Canada.

One of the first women to join — along with her mother and sister-in-law — was Jessica Houssain. “Significant social change takes time, capital and partnership,” says the New York-based Vancouver native who works with Women Moving Millions, a philanthropic organization.

She was attracted to the opportunity to “see things working,” as she did on a recent trip (at her own expense) to observe the project already under way in Ethiopia. “I joined for the deep listening opportunities and to take a four-year learning journey with a team,” she says.

The team approach also appealed to Montreal-based Bita Cattelan. “I have lots of things I want to ask questions about and share with other women,” she says. When she was growing up, her father taught her the importance of giving back, and as a young woman she wanted to work in philanthropy. “I even applied for a job at UNICEF,” she says.

But she ended up being an engineer and, over the years, has also been involved with child-protection causes. “This team will help me learn about child health,” she says. “What I wanted to do at 25 I can start now at 47.”

LeBlanc certainly knows the power of teamwork. “You learn about compromise and sacrifice,” she says. “You can strive every day to be the best version of yourself, but it’s not about you — that intent and mindset are what helps the team.”

Cattelan is already sharing her own excitement about her new-found team with friends. “I want there to be a ripple effect,” she says.