ELLE World: Seeing is believing: The power of virtual reality

Virtual reality is called “the empathy machine” for good reason. 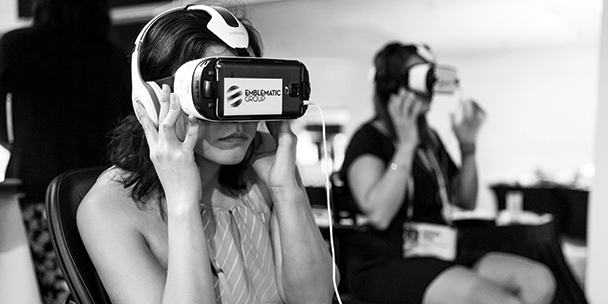 Engulfed. Provoked. Gut-wrenched. I didn’t associate these feelings with virtual reality (VR) until I put on a headset and tried it.

Nonny de la Peña, known as “the godmother of virtual reality,” had just given a talk about what she calls immersive journalism at the TEDWomen 2015 conference in Monterey, Calif.

I was intrigued by her description of how VR can take you “inside the story” and lets you “remember with your entire body and not just your mind.” She spoke passionately and showed examples of her work on the (non-3-D) screen behind her:

Project Syria transports you to a street where a young girl is singing when suddenly a bomb goes off; Hunger in Los Angeles puts you in a long food-bank line when a diabetic man collapses from low blood sugar; One Dark Night takes you into the rainy night when George Zimmerman shot Trayvon Martin so you can see for yourself how the events unfolded; and Use of Force lets you observe the beating death of Anastasio Hernandez-Rojas by U.S. border-patrol agents from behind a nearby fence and from a rooftop, where witnesses actually stood.

De la Peña explained how she and her team at the Emblematic Group have to “be very cautious” to ensure that they build these pieces “with integrity.” All are meticulous reactions of actual events, each transformed into VR using architectural renderings, photographs and audio from 911 calls and other recordings.

I’d read detailed news accounts and watched documentaries about these kinds of events, and I had been affected. So how much more intense could a VR experience actually be? Right after that TED session, I found out.

I sat down in a swivel chair in the conference space and put on a Samsung Gear Oculus Rift headset to watch Kiya, de la Peña’s latest 3-D piece. At first, I was aware of the ambient chatter of my surroundings as people mingled during the break. But I was soon transported into a living room where a gun-wielding man was grabbing and shaking a woman named Kiya.

Two women — Kiya’s sisters — were trying to convince the man to let her go: They tried to talk him down, they called 911, they put up their hands to try to calm him. I was right there. I reached out with my own hands, and I swivelled around in the chair looking for something in the house that might help. (My only reminder that I was still in a conference centre came when my leg briefly brushed past my bag on the ground. I reached down for it but could not see it in my new reality.)

My pulse was racing, and I felt clammy. I mumbled “Stop” under my breath. The man pushed the sisters outside the house, and I was transported along with them to a new spot outside. Like them, I didn’t want to leave. Together, we looked up and down the streets, anxiously waiting for the police car to arrive.

Stuck outside, we were helpless as we listened to bits of the struggle continue to unfold inside the house — the audio wasn’t very clear, but that added to the sense of confusion. Then there were distinct gunshots.

My stomach dropped. The police rushed into the house — and then came out with the devastating confirmation. But we already knew. I took off the headset and let out a deep breath. And then another. My eyes had welled with tears. I couldn’t immediately get up — and I couldn’t believe there were people nearby, obliviously picking up wasabi-flavoured seaweed strips from the snack station.

Now I understood the “duality of presence” that de la Peña talks about. And what she means when she says VR allows you to “tap into these feelings of empathy.” Even more than a month later, the experience is still with me; when I think about domestic violence now — something I’ve never experienced personally — I internalize it more than I had before.

Social justice is just one example of the potential practical power of VR. The technology is also beginning to be used for therapeutic purposes. Recently, in one small study, researchers in Korea used it to treat 10 alcohol-dependent patients: After a week-long detox, participants cycled through three different VR scenarios twice a week for five weeks. One of the scenarios placed them in a room where people were getting sick from drinking, and they experienced this alternative reality while consuming a vomit-tasting drink. Overall, their cravings seemed to be reduced.

Another example comes from Toronto- based VR start-up PCP VR, where founder Erik Peterson developed a VR-based rehabilitation program for stroke patients. (The program is now in the testing phase.) Doing exercises, like bicep curls, with a VR headset has the potential to reawaken “dead” limbs, says Peterson. “Upon seeing the correct movement, signals from the brain to the arm continue to get sent down through the limb until it ‘reawakens’ and can move again,” he explains.

“With VR, having access to the experiential part of the unconscious mind opens up a lot of doorways for everything, including the empathy stuff,” says Peterson. “If you can trick the physiology of the brain to the point where you can make it believe it’s moving an arm when it’s not, then you’re also going to be able to do a lot more in terms of making people understand what it’s like to, say, live in sub-Saharan Africa or be a rich Russian oligarch. And I think that having the juxtaposition of something like being a poor kid in Africa with being the richest man in the world within minutes will be a strong tool. You can’t not see the dichotomy — it will be an unpreced- ented way to see the world.”

Still, Peterson believes that we’re just beginning to discover the true power of VR; he calls the VR technology that is on the market now “entry level.” Much more powerful “high-end” VR tools and environments, ones that can generate what in the industry is called “presence” (like the ability to virtually walk through a refugee camp in Jordan and interact with people in real time rather than watching a digital recreation unfold from a set point), are coming in the near future. “Stuff that used to be considered science fiction is now on the horizon,” he says.

This all makes me excited but a bit nervous too. There is a real power to VR, and it has potential for such good. But it can also be used for things like violent gaming — and you can imagine what else. Scenes from the 2014 Robin Wright film The Congress — where most of the population abandons the real crumbling world for a strange totalitarian, post-apocalyptic VR “universe” — come to mind as well.

Still, despite all this, de la Peña trusts in the truth that VR can reveal. “Truth can be painful sometimes,” she said in her TED Talk. “If you feel it with your whole body, it might be less easily forgotten and more deeply remembered.”

Aside from social justice and rehabilitation experiences, VR offers a new way for us to invite you into the ELLE Canada world. Experience our VR cover shoot with Diane Kruger, which Erik Peterson shot for us on-set in Los Angeles. Here’s how to watch it:

On your cellphone, go to ELLECanada.com/3Dcover.

For the full immersive experience, watch the film on a Samsung smartphone using the Samsung Gear VR powered by Oculus headset ($253, samsung.com). The phone slips sideways into a holder right in front of your eyes.

Or, insert your cellphone into a cardboard viewing frame that helps simulate the 3-D experience ($20, Unofficial Cardboard, unofficial cardboard.com).