"The last page in the book of my life": So said the Iranian woman in her final message before she was hanged for killing a man whom she accused of attempting to rape her. 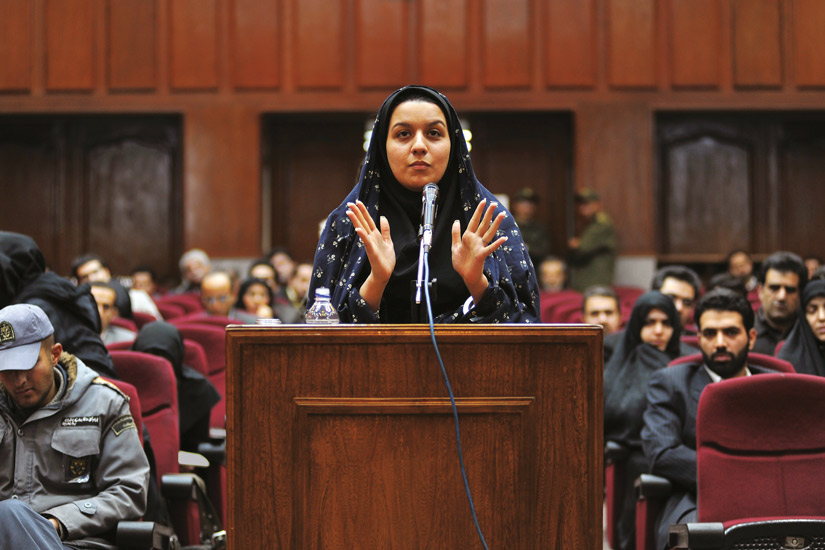 Jabbari testifying in an Iranian court in 2008.

In early 2007, Reyhaneh Jabbari had dreams. “Once upon a time,” she wrote in one of the letters she penned while on death row at Shahr-e Ray prison outside Tehran, Iran, “I was living free from pain and suffering in a home built with love and compassion.” But all that changed when Jabbari was 19 and in her third semester at university, where she was studying computer software.

She tells her story through the letters. One day, while at an ice cream store, an older man, Morteza Sarbandi, overheard her talking on the phone about her part-time work as an interior designer. He approached her, introducing himself as a doctor, and explained that he wanted his office redecorated. Several weeks later, on July 7, 2007, Sarbandi and a male friend picked Jabbari up to visit his office, but the friend exited the car before they arrived.

When she got to the space, she was shocked. “It was not an office,” she wrote. “This was a rundown residential flat filled with dirt and dust.” As Jabbari nervously began to sketch and take notes, she said, Sarbandi locked the door, covered the sofa with a bedsheet and then showed her a condom and asked if she knew what it was for. “I knew. Fear seized my soul. I stood up. I seemed smaller and weaker sitting down. He came forward,” she wrote.

Then she saw a knife and grabbed it. “It was too small to even scare him. He was laughing,” she wrote. As they struggled, she continued, “I raised my hand and with all my hopes and dreams in my mind I stabbed him.” She said he sat on the floor and pulled the knife out of his back while she searched for the key to get out of the apartment. Then he came at her once more “and punched with his bloodied hand. I ran towards the door and tried opening it by stabbing the door…. Then I heard the sound of [a] key turning in the door.” Sarbandi’s friend entered the room and she ran out. Sarbandi later died in the hospital.

Jabbari was convicted of murder; she was sentenced to death in 2009 and hanged on October 25, 2014. She was 26. During the seven years she spent in prison, she said that her only salvation was writing long letters to her mother with whatever she could find: She picked pieces of scrap paper out of the garbage and sometimes even wrote with a pen that other prisoners used to tattoo themselves. Iranian prisoners are allowed to write letters, but writing about the judicial system and prison conditions is illegal, according to Mohammad Mostafaei, who is one of Iran’s most successful criminal-defence lawyers and who represented Jabbari. Some of her letters were taken by guards and likely destroyed, but more than 40,000 of her words survived after she gave them to fellow prisoners who were about to be released.

I came by some of these letters via Mostafaei, who’d had them translated from Farsi into English by various people in Iran who cannot be named for their protection. Some were posted on Facebook to raise awareness about her case. Mostafaei has been instrumental in launching international campaigns to reverse the sentences of some of the country’s highest-profile human-rights cases, including children facing the death penalty and Sakineh Mohammadi Ashtiani, a woman who, in 2006, was sentenced to death by stoning for adultery. Last March, Ashtiani received a pardon, and she has since been released from prison.

“When Reyhaneh left Sarbandi after the attack, he was alive,” says Mostafaei, who was forced into exile in 2010 due to his human-rights work and defence of Ashtiani. While running the Universal Tolerance Organization, a non-profit group based in Norway, he continued to help on Jabbari’s case as an adviser. “There is no way the wounds she inflicted could have resulted in his death,” he further explains. “The third person who came into the room…no one ever looked into that because of connections to people high up in the Iranian intelligence. [Sarbandi was a former employee of Iran’s Ministry of Intelligence.] Then there is the issue of self-defence. Reyhaneh had no intention of killing another person. She stabbed him with a knife to protect herself.”

Under Iranian law, Sarbandi’s family could have granted Jabbari clemency from the death penalty, but they wouldn’t – allegedly, one of the family’s conditions was that she retract her claims of attempted rape against Sarbandi. She refused.

Here are excerpts from four undated letters (translated from Farsi) that Jabbari wrote during her last year in prison as well as an excerpt from the final voice-mail message she left for her mother.

ONE DAY, ONE OF THE GUARDS GAVE ME A CARD and told me the card was equivalent to having money. By then, my injuries had healed and I could take showers. That same day an old woman came to clean my cell. This was the custom at Evin [a prison where she was held prior to being transferred to Shahr-e Ray prison]: Women who were lonely and had no visitors had to work to earn telephone rights and by selling their phone time to other prisoners would earn a living.

Her name was Nessa. She was full of regret and disappointment. I gave her my card and asked her to buy me a pen and take as much money as she wanted from the card. She brought me the pen together with a cookie with a golden stem. I was experiencing a new taste that reminded me of home and happier days. Now I had a pen!

Shamloo [one of Jabbari’s interrogators] had prohibited me from reading newspapers, having visitors, reading books, getting any news or reading the Quran. But I had a pen which was complemented by some papers I took from the trash cans when I took walks outside. I would put them in my pockets and bring them back to my cell. I started writing on little pieces of white paper. I expressed my anger, complained, got angry, cursed…and gave Shamloo a nickname…the Old Lizard.

THE MERE TASK OF GETTING UP AND ANSWERING questions is agony. The male interrogator does not know what it means to strike a woman in her breasts with a knee during her monthly cycle. I do not know why when women give birth to boys, they do not tell their sons how they feel, so that when their little son grows up and becomes an interrogator, he would know how to knee-strike an accused in the stomach. An accused who turns out to be a woman and happens to be spending the most difficult days of her life.

A FLUORESCENT LIGHT WAS ALWAYS ON in my solitary cell. I could never see the outside light to know whether it was day or night. I only realized it was daytime when workers and guards were busy walking about. And in the nighttime silence, I learned to hear things by putting my ear on the cold metal door and having conversations with the inmates in my neighbouring cells through the little food doors. I learned to stay up at nighttime. On one of those sleepless nights, I got to know Akram and Parvaneh. Akram was the wife of a clergy and I never understood why she was in prison.

But Parvaneh had a different story. She had been in prison in the 1980s but had miraculously been saved from execution. Now she was in prison for supporting a man I didn’t know but she told me about. His name was Osanloo and was apparently the head of the bus company’s labour union. I could not understand why a person should be imprisoned for such a thing. I told Parvaneh my injuries were getting healed, and she constantly told me about the importance of resisting forced confessions. Sadly, she came to my life too late, when I had already confessed everything – to participating in politics, which I never understood, and to all kinds of relationships.

I, REYHANEH JABBARI, WHO HAD NEVER BEEN ARRESTED before and had never done anything to even get a warning from the university’s security office, confessed to [illicit] relationships with many people. And it was the Old Lizard who said any contact between a man and a woman who are not related – even a phone conversation – is a relationship. And I, who stayed away from even talking to people that I didn’t know, confessed to what he wanted me to.

DEAR SHOLEH, TODAY I LEARNED THAT IT IS NOW my turn to face Qisas [the Iranian regime’s law of retribution]. I am hurt as to why you did not let me know yourself that I have reached the last page in the book of my life…. The world did not love us. It did not want my fate. And now I am giving in to it and embracing death…. In the other world, it is you and me who are the accusers and others who are the accused. Let’s see what God wants. I wanted to embrace you until I die. I love you.

Human Rights Watch, Amnesty International and the United Nations, as well as many Western nations, condemned Jabbari’s execution and lobbied hard for it to be called off.

“There were serious procedural issues related to due process in the handling of her case, including Jabbari’s arrest, her access and denial to a lawyer and being unable to see her family,” says Faraz Sanei, the Iran researcher for the Middle East and North Africa division of Human Rights Watch. “The period after someone is first detained and interrogated is when they are most vulnerable to ill-treatment, including psychological and physical abuse and coerced confessions, which happens a lot in Iran.”

Iran is one of a handful of countries that criminalize consensual relationships outside of marriage. Adultery, for instance, is still punishable by stoning in Iran. This is also the case in Afghanistan.

In the 2012 Human Rights Watch report I Had to Run Away, it was estimated that 400 girls and women were imprisoned in Afghanistan for so-called moral crimes, such as running away from an unlawful marriage and zina, which is sex outside of marriage (including being raped or being sold into prostitution).

“These systems that criminalize moral crimes are more problematic for women because there is more stigma attached to them,” says Sanei. “It makes it much more difficult for girls and women who are sexually assaulted to defend themselves and then come forward. There is a perception both in the judiciary and in public opinion that they were doing something wrong.”