Anna Cunningham shares the harsh lessons she learned as a journalist in Nigeria. 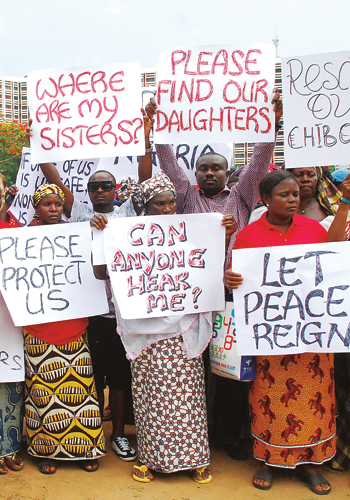 I freely admit that I live a double life. I’m a foreign correspondent, reporting from a developing country in West Africa, and a mother. Every day I try to strike a balance between the two – and it’s not always easy. For most expatriates who have children and live in Lagos (Nigeria’s largest city), it’s about trying to live as “normal” a life as possible despite daily power cuts, water shortages and ever-present security concerns. For me, “normalcy” also means trying to shield my three-year-old daughter from most of my work: conflict, violence and, most recently, in mid-April, the mass abduction of more than 200 girls from their school in Chibok, a small town in northeast Nigeria, by Boko Haram Islamists. When I first heard about it, I wasn’t that surprised: Schools have been targeted frequently over the past five years, and kidnappings for ransom are depressingly regular. But I was shocked at the numbers: 276 teenagers kidnapped, 57 reportedly escaping early on and more than 200 still being held. The abduction had taken the uprising between Islamists and Nigerian security forces to another level.

A week after the group claimed responsibility for the kidnappings – and just after I’d put our daughter to bed – my husband, who’s also a journalist, said to me, “There’s another video.”

“What is it this time?” I asked. “Boko Haram again. But it shows the schoolgirls,” he replied.

Minutes earlier, our daughter had asked whether tomorrow was “a school day.” The contrast couldn’t have been starker. That Sunday night was restless as we waited for the next phone call to say that the video had been downloaded and transcribed from Hausa and Arabic and was ready to file. The story broke on the news wires at about 9 a.m., just after I got back from taking my daughter to school. There’s always a skip in her step as she waves goodbye and joins her school friends. Although her preschool is an exciting place to play and learn, I am also aware of just how fragile security is in Nigeria. The school is surrounded by high concrete walls topped with razor wire. Security cameras scan the perimeter, and guards patrol the metal-gated entrance. My husband and I sign our daughter in and out. Most of her friends are dropped off and picked up by nannies in sleek SUVs with blackedout windows. This is the privileged side of Nigeria.

On the way home, I’m always reminded of the reality for most people when I see a mother nursing her baby at the side of the road, stirring a pot on a makeshift fire next to a mosquito-ridden open sewer. In the north, it’s different still: Since the Boko Haram’s Islamist insurgency began in 2009, their attacks have destroyed any semblance of functioning infrastructure: Health-care facilities and schools have been razed; doctors, teachers and ordinary civilians have fled for their lives or been killed. One new attack I reported on recently had eyewitnesses who claimed that children as young as my daughter had been abducted.

My daughter taking her first educational steps in Nigeria seems unreal under the circumstances. Yet on the daily school run, I see Nigerian children happily walking, jumping and running to class in their school uniforms. Education is taken seriously across Nigeria for boys and girls: In a country where, according to the World Bank, 84.5 percent of the population lives on less than US$2 a day, learning is seen as a way out of poverty. “They are our future,” said the father of one of the missing girls, begging for their safe return. So, I find it odd that the government responded so slowly to the mass abduction. If this were Canada or the United States, surely the prime minister or president would never be off the television. But I’ve had to adapt to things being done differently here. In the end, President Goodluck Jonathan did comment – albeit three weeks later. I’ve also had to sift through conflicting claims and counterclaims, trying to pick out nuggets of truth. It’s not always so apparent.

A journalist friend who has been here longer than I have describes Nigeria as “the country of no truth.” I am beginning to understand what he means. The sullen faces of the abducted girls, dressed in Islamic head scarves and professing at gunpoint their “willing” conversions to Islam, made for heart-rending viewing. During a break between live television and radio reports for the CBC, I went to collect my daughter from school. Colourful pictures the children had painted were hanging on the classroom walls to dry, and the shelves were stuffed with books. The footage I’d just seen of Chibok showed a burned-out school. Windows were smashed, and bullet holes dotted the walls.

What this harrowing story has taught me is the value of my own education and how much we take for granted. My career has led me to work in Afghanistan, India, France and now, since February, Nigeria. As a journalist, I want everyone to know what’s going on. Whatever the outcome for the kidnapped girls, their lives have been changed forever. All they wanted to do was learn. But as a mother, I don’t want my daughter to have too much reality just yet. On the way home, she pointed to a roundabout where protesters from the #bringbackourgirls campaign have put up placards – each one has a silhouette and a name. One day I’ll tell her the story about the girls who went to school and didn’t come home.

READ MORE:
Get to know 8 Canadian documentary filmmakers
A closer look at the garment industry
Meet Georgette Gagnon: A voice for the voiceless