ELLE World: Oliberté is on a quest for happy feet and happy workers 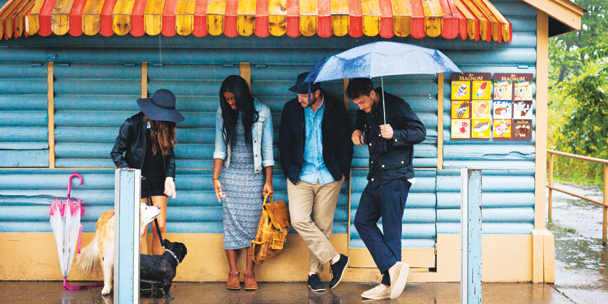 A shot from Oliberté’s spring/summer 2014 campaign.

In 2009, Canadian Tal Dehtiar’s newly formed Oliberté shoe company produced just 200 pairs of rubber-soled leather sneakers using contracted factories in Ethiopia. Fast-forward to 2014: The company is on track to put out 30,000 pairs in two dozen styles from its own factory in Addis Ababa, Ethiopia. Last September, it became the first footwear factory in the world to earn fair-trade certification from Fair Trade USA.

For Dehtiar, who’s based in Oakville, Ont., it’s just a start: The 33-year-old’s long-term goal is to generate one million jobs in Africa by 2025. While he has a long way to go – just 80 employees now work at his Addis Ababa factory – he’s optimistic it can be done. “When I say a million jobs, Oliberté is never going to hire one million people,” he says. “But we want to be the responsible brand that stirs up the industry and shows that manufacturing can be done in Africa. It’s the idea that will fuel a million jobs.” To accomplish this, Dehtiar is focused on local empowerment and
supporting workers’ rights.

MUST-READ: How a Canadian artist is shedding light on global issues

“Over 60 percent of our workers are women, and most of our employees had never had a job in their lives before this,” says the McMaster University MBA grad, who travels to the factory every two to three months but leaves the day-to-day operations to Feraw Kebede, his “main guy” from the start and Ethiopian general manager. The company pays its employees more than double the average wage in Addis Ababa, which is only about $30 a month. And the staff are now actually earning much more than that, thanks to the factory’s new fair-trade certification: Every time an order ships, 5 percent of the shipment’s invoice amount is wired to an employee fair-trade committee bank account. Since last September, $35,000 has been paid out – and the money is split equally among the workers. “They can pay themselves or elect to purchase things, as long as it is decided by the workers as a group,” says Dehtiar. “They have a union and a committee that ensure that their rights and voices are equally heard and represented.” At the last meeting, the employees discussed buying bonds to invest in the local hydro plant.

What’s next for Oliberté? Find out on the next page…

An Oliberté worker stitches a shoe.

Next up? The company is aiming to become carbon neutral by the end of the year (as the shoes are shipped by air). It’s also hiring additional staff and ramping up production to hit the factory’s capacity of 100,000 pairs a year. Even more ambitious, Dehtiar is already scouting locations in Addis Ababa for new factories. “We’re considered a ‘social enterprise,’ but I hate that term,” he says. “I think every business should just take care of their people, their product and the environment every day.”

THE NAME
Oliberté is a combination of “liberty” and the “O” in “O Canada.”

THE GEOGRAPHIC CONNECTION
“Because we’re the first premium made-in-Africa footwear brand, all our shoes’ names are a play on African cities. The ‘Adibo’ is Addis Ababa, and the ‘Mogado Hi’ is Mogadishu. And we just added a map-of-Africa pattern to our rubber outsoles,” says Dehtiar.

THE DESIGN
“I’m not a designer by any means,” says Dehtiar, so, from day one, he contracted Toronto-based designer Ryan Wilding to bring his vision of a casual and rugged collection of stitched-down boots, loafers, Mary Janes, boat shoes and ballet flats to life. (Oliberté also makes a limited number of leather bags and wallets.)

MUST-READ: The sewing and cultural traditions of Nunavut

THE LEATHER
“Our cow, sheep and goat leathers— all our shoes are lined with goat for breathability— are hormone-free and purchased in Ethiopia. Hafde Tannery, near Addis Ababa, is our main leather supplier. It’s the only tannery in Ethiopia with a Chrome-3 recycling program, and it also has a water-treatment plant,” he says.

WHERE TO BUY
The line is carried at Town Shoes, Rowan Sky in Vancouver, C Squared in Toronto, other specialty retailers and at oliberte.com (from $90 to $170).

READ MORE:
Standing up for child rights in Kenya
How one woman is awakening South Sudanese culture
A deeper look at garment production in Thailand