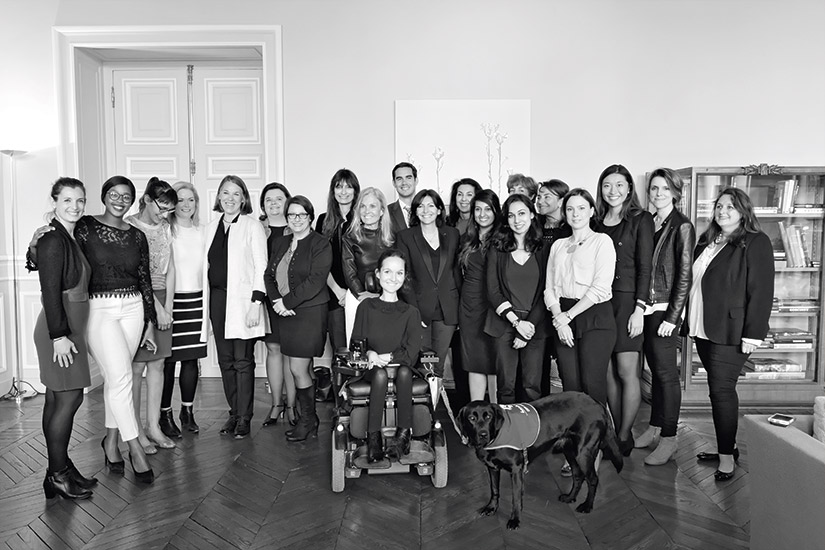 The 2016 finalists and jury members in Paris.

This past spring, Le Comptoir de L’Innovation (CDI), a renowned global social-investment firm in Paris, asked the editors-in-chief of nine editions of ELLE to put together a jury to select a woman from their country who has started a social entrepreneurial business. A few weeks later, each EIC flew to Paris with their finalist to participate in an international conference organized by CDI. At a luncheon held at Paris City Hall, each finalist had three minutes to present their business to an esteemed panel, which was chaired by Paris mayor Anne Hidalgo. Later that evening, they had 30 seconds each to present their case before 1,000+ potential investors. And the winner is….

Thato Kgatlhanye has one key message for young women who want a rich career and life: “Start a business that is meaningful and the work that you do will matter.” The 23-year-old South African founder and CEO of Rethaka was the winner of this year’s ELLE Impact2 International Award for Female Social Entrepreneurship.

At the ceremony, Kgatlhanye explained the origins of her Repurpose Schoolbags program. “There wasn’t an ‘aha’ or light-bulb moment,” she recalled. “My team started by asking ourselves ‘What does it take for a child living below the poverty line in Africa to get educated? What are the barriers that exist that aren’t visible?’ After speaking with kids, we discovered that many of them walk long distances to school, often returning later in the evening when it’s dark. If there is no power, kerosene or candles, they can’t do their homework. We decided to create a school bag made from upcycled plastic bags that also has a solar-powered light that charges during the day while the kids walk to school. At night, it can be removed and used as a flashlight on a darkened road and then later as a light to study by.”

More info To date, they have sold 7,000 bags, and the goal for this year is 16,000. If you would like to purchase these $25 bags on behalf of a child, class or school, go to repurposeschoolbags.com.

Sabrina Premji co-founded Kidogo, a childcare initiative launched in the poorest areas of East Africa, after she visited a “baby-care centre” in Mlolongo, a slum just outside of Nairobi, Kenya.

“In these communities, mothers have three options for daycare,” explained Premji. “They can leave their children as young as two years old home alone, entrust their care to an older sibling who is pulled from school or drop them off at an unlicensed baby-care centre for a nominal fee.”

Premji recalled entering one of these centres and practically tripping over a baby who was bundled on the floor alongside 15 to 25 other infants. “They were all lying there awake, yet I heard nothing but silence,” she explained. “Many were given sleeping pills to hush them; others learned that crying did them no good. After leaving the slum, I was so sad and enraged that something like this could exist. It was in that moment that my co-founder, Afzal Habib, and I asked ourselves ‘Can we provide a higher-quality childcare option for roughly the same price that mothers were already paying at the informal baby-care centres?’ That was the birthplace of Kidogo.”

So what is Kidogo? It’s a sustainable and scalable business model that involves building best-practice Early Childhood Development Centres, or “hubs,” where children aged six months to six years are provided with quality care and education for less than a dollar a day. This is combined with a micro-franchising program for local “mama-preneurs” to open their own childcare “spokes,” or mini daycare centres, in their homes; these are supported—and monitored—by the hub.

“It takes around $5,000 in grant funding to set up each of the hubs, and through childcare fees alone, they are designed to be self-supporting within three to six months,” says Premji. “We’re hoping that this model can be replicated in other low-income communities around the world because every child, no matter where they’re born, deserves the opportunity to reach their full potential.”

More info Kidogo is still in its early days, but through its two hubs and five mama-preneurs, it’s already giving over 200 children living in slums the best start to life, particularly during the crucial first five years, when 85 percent of brain development takes place. (kidogo.co)

Enrica Arena, Italy, Arena’s company developed a process to create textiles from citrus waste. (There are more than a million tons of citrus waste created each year in Italy.) (Orange Fiber, orangefiber.it/en)

Charlotte de Vilmorin, France, de Vilmorin, who lost the use of her legs and arms due to a childhood neuro-muscular disease, launched a website that enables individuals to rent, or rent out, their mobility-enhanced vehicles. (Wheeliz, wheeliz.com/en)

Zoe Peden, UK, Peden’s company designed a language-development program for tablets that has helped more than 80,000 children and adults in the United Kingdom with their communication difficulties. (Insane Logic, insanelogic.co.uk)