ELLE World: How mobile technology is bringing power to the people

The rise of mobile phone use in the developing world offers opportunities to provide information about health, education and finance to those that need it most. 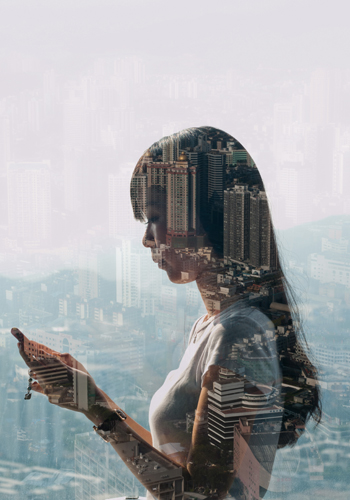 It happened during the day on a busy street in a nice part of Cairo. Rebecca Chiao was waiting at a metro stop with fellow commuters when, suddenly, a man began pacing back and forth in front of her – pants open and touching himself while he ogled her. “Surely someone will do something soon,” she thought as she stood there averting her eyes. “They can all see him, and someone will speak up and tell him to stop or chase him away.” But, as she shared with the audience at last year’s TEDxAlmedalen in Sweden – an offshoot of TED Talks – most of the bystanders ignored the spectacle, while others watched in disgust and glared at Chiao as if she had invited the indecent behaviour.

This incident – and hearing from friends and colleagues who had endured similar experiences – inspired the 36-year old Egypt-based American to launch HarassMap, an interactive crisis-mapping app that gives victims the power to report cases of sexual harassment via mobile phone and email. This information is then used to locate “hot spots” of harassment activity; once they are pinpointed, HarassMap works with the local community to encourage a zero-tolerance attitude toward sexual harassment and create “safe zones” in neighbouring shops and cafés. “We wanted to integrate this rapidly growing technological phenomenon with traditional offline activities that really bring the community together,” says Chiao. “There are real advantages to engaging people online, but it has to be backed up by offline work.” Since its launch in 2010, HarassMap has received 1,000 reports of sexual harassment. Chiao and her staff of 13 have also recruited about 500 volunteers to raise awareness in their own neighbourhoods.

More ELLE World: How a Canadian artist is shedding light on global issues

HarassMap is funded by Canada’s International Development Research Centre (IDRC), which uses technology to find solutions to development issues and is part of Canada’s foreign-aid program. IDRC program officer Matthew Smith believes HarassMap is a powerful example of the impact that technology, especially crowd-sourcing and user-generated information, can have on the lives of women around the world. “This technology can be used as part of campaigns to change social norms,” he says.

As mobile phones become more common in the developing world, the international development community is embracing the technology as a way to put information about safety, health, education and finance at the fingertips of the people directly affected. “International development is changing. The traditional type of aid-based culture that we’re so used to is beginning to be old-fashioned,” says Ceri Howes, the mobile technology program coordinator at the Cherie Blair Foundation for Women, which works in partnership with the private sector (including brands like Nokia, Vodafone and Millicom [Tigo]) and NGOs to create mobile apps that address the business challenges faced by female entrepreneurs in developing areas.

Mobile phone use is rapidly spreading, with five out of the globe’s six new mobile connections coming from the developing world and subscription to mobile services there projected to increase to 47 percent by 2017 (it was 39 percent in 2012), according to the GSMA, a consortium of global mobile communications companies. But there remains a gender gap. According to the GSMA’s 2010 Women & Mobile: A Global Opportunity Report, a woman from the developing world is 21 percent less likely to own a mobile phone than a man. The report also found that more than 300 million women (that’s two-thirds of those living in the developing world) don’t have access to mobile phone services. The GSMA mWomen Programme, a global public private partnership between the mobile industry and the international development community (it was launched in 2010 by former U.S. secretary of state Hillary Rodham Clinton), is trying to close the mobile phone gender gap in low- and middle-income countries, such as India and Kenya. “The mobile phone is not a silver bullet for development issues, but it’s a tool to use in pursuit of solutions,” says Beth Gertz, director of the GSMA mWomen Programme.

“Culturally, the idea of spreading knowledge and information on a real time basis can result in quite a large shift in attitudes toward women,” says Howes. “A woman’s ability to communicate increases when she has access to a mobile phone, but it also means she has an increased capacity to receive information. In today’s global world, information is really the new currency.”

The Cherie Blair Foundation for Women wants to help people like Elizabeth Tinunbu, a children’s toy manufacturer and retailer in Lagos, Nigeria. The foundation interviewed Tinunbu for their Mobile Value Added Services: A Business Growth Opportunity for Women research project, published in 2012. Tinunbu was supporting her family by selling her goods at the local market, but she was having a hard time sourcing lower-priced materials and finding data on market prices. “Tinunbu provided valuable insight into the specific business challenges that women entrepreneurs in urban Nigeria face,” says Howes. “Mobile technology can be incredibly transformational for most women who have access to it – they are using mobile phones in sophisticated and innovative ways.”

Funded by: UNICEF, with partners at the Zambia Centre for Applied Health Research and Development at Boston University; the Zambia Prevention, Care and Treatment Partnership; and the Clinton Health Access Initiative.

More ELLE World: Georgette Gagnon is a voice for the voiceless

RUDI is a co-operative rural trading company supported by India’s Self Employed Women’s Association. The group connects marginal farmers with small-chain produce suppliers to sell their goods via 2,000 local female sales agents called Rudibens. Now, instead of travelling to larger towns to process orders and replenish goods, farmers can place orders via text message and use SMS to contact the Rudibens and check supply levels. Funded by The Cherie Blair Foundation for Women in partnership with Vodafone Foundation India and India’s Self Employed Women’s Association.

Still in its pilot stage, WelTel uses SMS to communicate with HIV patients on antiretroviral therapy. Patients are sent weekly check-in messages from community healthcare workers (e.g., “How are you?”) and reminders about treatment regimens.

Smallholder farmers with basic mobile phones can use SMS to find out the retail price of seasonal products, such as onions, buy supplies at wholesale prices and connect directly with buyers.

Funded by: The IPO48 competition created by HumanIPO, along with charitable donations.

Using SMS, subscribers receive texts with facts and tips for entrepreneurs, like how to access affordable resources and marketing channels. The app is expected to reach tens of thousands of women by the end of 2013. It’s free for the first six months of use.

Funded by: The Cherie Blair Foundation for Women in partnership with the ExxonMobil Foundation, Nokia and MTN Nigeria.

ELLE World round up: A collection of stories of Canadians making a difference around the world.

At Camp Leakey, the fight to save Orangutans forges on.