A mother-daughter team is building a buzzing community in East Vancouver. 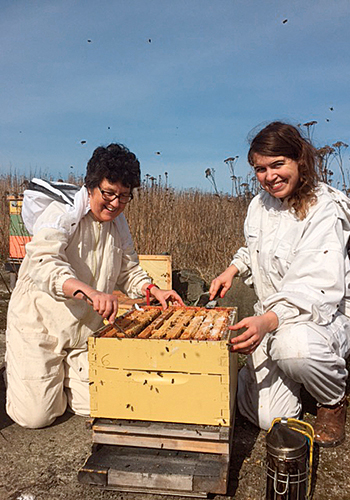 As hundreds of bees dart around her, beekeeper Julia Common, assisted by her daughter, Sarah, gingerly removes a wooden frame from an active beehive before carefully passing it to Sean, who stands nearby.

The frame is crawling with insects; it seems almost a living thing. For someone who has never handled bees before, Sean, a first-time volunteer with Hives for Humanity (H4H), is incredibly calm. Even so, he must be careful.

“Vibrations mean that you’ve made a mistake,” says Julia. “We’ll know very soon if they’re aggressive or not.”

“I’m sure that they’ll let me know,” says Sean.

A few metres away is a well-tended vegetable garden and, next to it, a pollinator garden. Designed for the 30,000 — odd bees in these hives, it’s filled with a wide variety of plants, from lavender and mustard to sage, lupine and clover. This, one might think, is a classically bucolic rural scene.

Except it’s not. Surrounded by graffiti — scarred buildings, the Hastings Urban Farm is located on a vacant inner-city lot in Vancouver’s problem — plagued Downtown Eastside, a place that is littered with trashed dreams and used syringes.

Here, H4H provides residents of what is often referred to as “the poorest postal code in Canada,” many of whom are living with addiction and mental-health issues, with the opportunity to turn the soil and tend the bees — and, more powerfully, cultivate a sense of belonging and self-worth.

Founded in 2012, H4H is the brainchild of Sarah Common. Born in Quebec and raised in Scotland, Sarah, 30, first arrived in the Downtown Eastside in 2006 when she was a University of British Columbia agriculture student with an interest in “food security” — the provision of safe, nutritious and affordable food. With its myriad afflictions, the Downtown Eastside proved to be a huge challenge: Poverty, homelessness, addiction and mental-health issues are all barriers to implementing effective food-security protocols.

“We came in thinking that we could increase the nutritional content of the meals being served by connecting the community to untapped sources of fresh food,” explains Sarah. “But what I found was a lot more than I expected.” And a project that would clearly take longer than a semester to complete. “I felt that as students we had taken a lot more than we had given,” she says. “I wanted to repay that debt, so I kept on volunteering and got more and more involved.”

This didn’t sit well with her mother, Julia, 62, who, in addition to having a similar academic background, had become transfixed by beekeeping when she was a young student at McGill University. Like many, she regarded Vancouver’s Downtown Eastside as violent and dangerous. “I’d been trying to get Sarah out of here her entire adult life,” says Julia, an active beekeeper for four decades. “I would come down here for drinks or dinner and hold onto her as if I were in the world’s worst place.”

In 2012, while thinking of ways she could help bring a sense of healing and purpose to the community, Sarah hit on an opportunity to reconcile her work — and an afflicted community’s needs — with her mother’s lifelong passion for apiculture. “The bees,” she says, smiling, “were a way I could do that, and I had this asset in my back pocket.”

One day, she broached the idea with her asset. “We were having coffee at my favourite café,” she recalls. “I said, ‘Hey, wouldn’t it be nice if we could do something meaningful together?’” Somewhat reluctantly, Julia signed on.

Armed with an initial $2,000 investment from the Portland Hotel Society, a local non-profit for which Sarah worked at the time, they established their first hive (still a going concern) at the Hastings Folk Garden, another reclaimed lot a few blocks east of the Hastings Urban Farm.

Today, about 190 volunteers help H4H maintain a network of 34 apiaries. Some of the volunteers are regular, some are not, but all derive a sense of purpose from, say, tending the pollinator garden or cleaning the drone frames. New moves include a recently launched retail outlet on nearby Powell Street. Called “Bee Space,” its hexagonal shelves are filled with beeswax candles, lotions and salves, and, of course, H4H’s own honey — the sale of which helps offset at least some of the project’s operating costs.

It hasn’t been completely smooth sailing, however. In 2013, in the wake of widely reported spending irregularities at the Portland Hotel Society, H4H was one of the affiliated social enterprises singled out as being a waste of taxpayer dollars — unfairly, say those who work with H4H.

At this juncture, H4H’s future is far from certain. The city-owned land won’t be available forever; it’s simply too valuable, and local housing pressures are too great. (The land is currently leased from the city for a nominal annual fee.) That said, the Commons insist that the work is far too important to give up.

“We wouldn’t let that happen,” says Sarah. “It’s unthinkable. At worst, we would reduce our hives.” Her mother agrees. “You don’t want to stop something like this,” reflects Julia. “And, you know, we make great honey.”

THE BENEFITS OF URBAN BEEKEEPING

While some cities re­strict backyard bee­ keeping (and others, like Toronto, don’t sanc­tion the practice but tend to turn a blind eye), Vancouver has officially embraced urban apiaries in its quest to become a sustainable city. (This is a significant departure from a few decades ago, when urban beekeeping was banned.)

To that end, Vancouver has developed a set of bee­ keeping guidelines; in addition, all backyard hives must be registered with the provincial government, which counts 2,400 registered beekeepers in British Columbia.

Although it may seem like West Coast flaki­ness — this is, after all, a city that allows residents to keep chickens in their yards — there are solid reasons to encourage backyard beekeeping.

Since a colony’s food sources in a city are more consistent than in rural areas, urban bees are usually healthier than their country cousins. As a result, city bees are ef­ficient pollinators and an important part of promot­ing the healthy growth of vegetable gardens and other flora — a desirable outcome for Vancouver, generally.

For the past decade, bee colonies have been dying at a rate of about 30 percent a year across the globe. In Canada, 58 percent of Ontario’s bee colonies did not survive the winter of 2013/’14, and the average loss across the country was 25 percent, according to a survey by the Canadian Association of Professional Apiculturists.

While the kinds of problems that plague commercial beekeeping enterprises — colony collapse disorder, for example, which may be the result of a perfect storm of parasites, poor nutrition and the use of pesticides — can’t be easily solved, promoting healthy urban colonies can, to an extent, act as a counterbalance to the losses.

READ MORE: ELLE World: Oliberte is on a quest for happy feet and happy workers

There are hives throughout Vancouver, some in very unusual places. On the rooftop of the Fairmont Waterfront Hotel, an apiary produces over 272 kilograms of honey annually, which is used to create everything from desserts and chocolates to cocktails and a house-made lager.

There’s another large apiary amid the grasses and plants that make up the Vancouver Convention Centre’s living roof. High end furniture retailer Inform Interiors keeps bees on the rooftop deck of its Gastown — area flagship. And, appropriately for a government that has embraced apiculture, you’ll also find hives on the roof of Vancouver’s civic headquarters — making it a fitting sight, perhaps, for residents who’ve ever felt stung by City Hall.

“Our garden keeps my family close to food and bees,” say Weston. “We have a veggie garden, as well as a flower garden that we grow specifically to attract bees,” she says. The bag, which was created in partnership with Burt’s Bees, comes with three of the brand’s new Lip Crayons (Carolina Coast, Hawaiian Smolder and Napa Vineyard).

Only 2,000 limited-edition bags will go on sale at Holt Renfrew on May 1 — and, thanks to the backing of Burt’s Bees, 100 percent of the $50 price tag will go to the non-profit Pollinator Partnership Canada, which works to protect pollinator ecosystems.

“I like to think of the pouch as a flower party you can take from day to night,” says Ela. “It celebrates the environment that bees thrive in.” – Text by Christina Reynolds