A Peace Treaty designs accessories with a greater purpose. 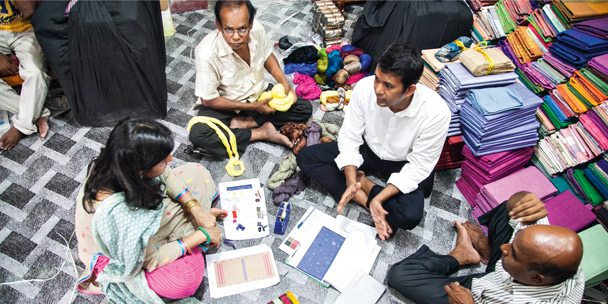 With six passports between them, Farah Malik and Dana Arbib are true global citizens. Although they grew up in different cultures – Malik is a Pakistani Muslim and Arbib is a Libyan Jew – the designers behind the accessories brand A Peace Treaty have similar backstories: Both immigrated to Canada with their families when they were children. They’ve also both lived in various parts of Europe and the Middle East. And now, they both count Manhattan as their home base – from which they travel the globe in search of inspiration and skilled artisans to help create their luxe line of jewellery, scarves and caftans.

The pair first met at Arbib’s brother’s wedding in Rome in 2007. A year later, they reconnected in Manhattan, where Arbib was a freelance designer and Malik worked in international development. They decided to create a brand that’s loaded with meaning: “We make beautiful things that transcend a lot of political division,” says Arbib.

In the past six years, the pair has worked with more than 350 artisans – from camel-bone carvers near India’s Thar Desert to cashmere weavers in the Himalayan foothills – many of whom are widowed or disabled women. “I want to use the power of fashion to connect traditional artisans with the global economy,” says Malik. “There are so many beautiful things being made by the most talented people in the midst of conflict and instability.”

In addition to employing artisans to create products for their own line, Malik and Arbib also encourage them to market their skills for other commercial pursuits. The duo has helped families and groups set up their own businesses and co-ops, often investing in weaving looms, sewing machines and jewellery-making tools to help them get started. “We pay a dignified living wage, and we don’t work with any factories, so it means there is no middleman to eat into the profits,” says Malik.

In 2010, they partnered with Afghan Hands, a non-profit that teaches women embroidery skills so they can earn an income and become self-sufficient. Working with the group, they created 26 scarf designs inspired by Afghan iconography for A Peace Treaty’s Sozan Doz collection. The Afghan women who worked on the intricate hand-embroidered scarf designs – which included each woman’s name and a piece of her own burqa – set their own wages, earning $75 to $90 per scarf, which retailed for around $300 each.

However, the logistics of working in Afghanistan turned out to be a challenge for the then fledgling company, and the collection ultimately wasn’t profitable. Beyond expected costs, like arranging airlifts for everything from needles to thread, were bigger financial hits – one of their first completed shipments got blown up at the border. “There is a major level of international relations that we are always trying to figure out,” says Malik, who, as a Pakistani, cannot enter India, where all of the brand’s jewellery is produced. “Sometimes we joke that our company name can also stand for how we are constantly trying to fight against border restrictions.” Still, Arbib and Malik intend to work with artisans in Afghanistan again.

For the brand’s recent Villa Bambola collection of scarves – which were block-printed by artisans in Jaipur, screen-printed in Mumbai and indigo-mud-printed in Delhi – Arbib took inspiration from her Libyan heritage. She met with 50 Libyan Jews to look through their photos, and she spent hours in a library in Rome researching the architecture of Tripoli’s lost mosques and synagogues. The resulting printed-lattice and mosaic motifs “reflect a time of religious harmony,” she says.

READ MORE: A closer look at the garment industry

Next up for the pair is a trip to Peru to work on their fall/winter 2015 collection – this will be their fourth year partnering with Peruvian alpaca farmers. “Each year we’ve worked with them, the output doubles, and that means bringing in more artisans who are being trained to do knitting and weaving,” says Malik. “We think this is a more thoughtful way of designing and producing, which results in much more exquisite products.”

A Peace Treaty’s new Suwa collection is inspired by North African warriors and the savannah. The jewellery features sustainably sourced buffalo bone from Kenya and was crafted by Jaipur-based artisans; the scarves and caftans were made by Bangladeshi artisans (from $112 to $918, at apeacetreaty.com and Holt Renfrew, holtrenfrew.com).

AND SEW IT BEGINS

Almost two dozen young women who grew up in the Noel Orphanage in Gisenyi, Rwanda, can now afford to pay their own university tuition – and help feed more than 900 schoolchildren in their village – thanks to sewing training from Tara Clapper’s non-profit No. 41 (no41.org), based in Nashville, Tenn. Since March 2012, the tiny start-up has taught many of the over-18-year-old girls still living at the orphanage (with limited opportunities for work and education) the culturally relevant skill and has provided them with stable living-wage jobs crafting tote bags. The sale of each $75 bag covers a year’s worth of school lunches for a local child.

AND SEW IT CONTINUES

Beaded rings, along with other jewellery, was hand-made by one of 1,000 women in Kenya as part of Free the Children’s Toronto-based Me to We Artisans program (metowe.com), which was founded in 2010 and is now expanding to India and Ecuador. Each ring sold provides a week’s worth of clean water for a family – and comes with a code you can enter at trackyourimpact.com to find out where the family resides. (In this case, it’s Kenya’s Narok South District.)