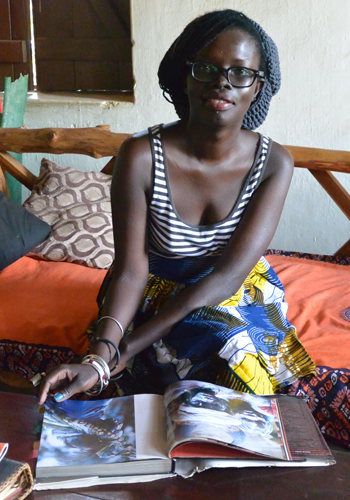 Akuja de Garang was just eight years old when the war forced her family to flee South Sudan in 1983. But, in 2004, with a degree in African studies and a master’s in development from the University of London, she came back with a yearning to help rebuild her community. “Home is home,” she tells me with a faint British accent as we sip rosehip tea in the airy kitchen of her eclectically decorated home in the capital city of Juba. “This house was my mom’s,” she says quietly of the space she now shares with her husband, Papit, and their two dogs, Rumbek and Letsatsi. “It’s incredible that it wasn’t destroyed in the war.”

After her return, de Garang spent a couple of years working for UNICEF on child-protection issues and a few more with the United Nations Office for the Coordination of Humanitarian Affairs. She then juggled several consulting gigs for public-sector reform projects—she helped set up the new government’s payroll system—before she decided to create her own non-profit, Pach, last spring. “It’s a social enterprise meant to awaken creative identities,” she says. (“Pach” means “awakening” in a number of Nilotic languages.) “I’m fascinated by traditional South Sudanese crafts and artifacts, but because of the strain of civil war and inter-tribal violence, they are in danger of being lost. People don’t recognize the value of what they have—they have unique skills,” she says.

More ELLE World: A journey to save lives in SOUTH SUDAN

Read more about Akuja de Garang on the next page…

A model in a look from de Garang’s Akuch clothing line at the 2012 Festival of Fashion and Arts for Peace fashion show in Juba.

When we met, de Garang had just returned from a fabric-sourcing trip to Kenya for her year-old clothing line, Akuch—which means “mystery” in the Dinka language. It’s just one of the diverse projects she is working on. “I like fashion, but I’m not necessarily focused on fashion—it’s South Sudanese culture that I’m really interested in,” she tells me as she smooths the high-waisted graphic-print cotton skirt (her own design) that she’s casually paired with a striped tank and turquoise nail polish. “My pieces are made locally, but there is no textile industry here…” she trails off. It’s just one of the things de Garang would like to change.

Last July, to coincide with the first anniversary of South Sudan’s independence, de Garang launched Pach’s first project: the annual Fashion & Arts for Peace Festival. The multi-designer fashion show and artisan market attracted 500 people. “It’s just a start, but it shows what’s possible,” de Garang says. “If South Sudanese models [like Alek Wek] can become known around the world, then why not artisans and designers too? I want to help them contemporize what they are creating, compared to the way something may be worn in the village, and sell it locally and internationally.” Before I leave, de Garang gives me a tour of her home, which is filled with striking South Sudanese artifacts—bright, beaded Dinka corsets and shawl necklaces decorate a hallway, while carved gourds and expertly woven baskets fill wooden shelves behind the dining room table. An intricate metal pipe mounted on the wall catches my eye. “That is made out of used bullet-shell casings,” she tells me. “There are many artisans around South Sudan who make these pipes. I am helping an elderly man from Rumbek called Dutdit. People would collect these if they just knew about them and could find them.”