How one Canadian’s New York City bakery braids together women from around the world. 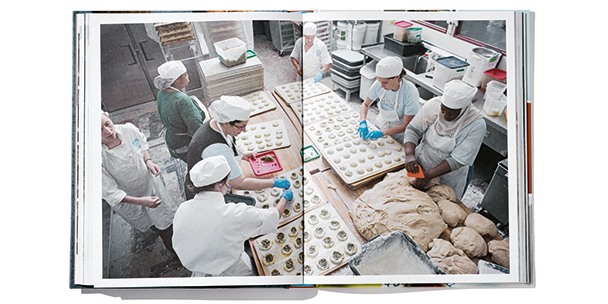 The Hot Bread Kitchen Cookbook is the bakery’s first collection of recipes, which also includes first-person tales from the bakers and photographs of them at work (above).

When Clarisse Sango was growing up in Burkina Faso, she often helped bake bread using black beans soaked in water and then ground into a paste. But when she set out for New York City six years ago, she had few professional qualifications. Six months ago, she joined the Hot Bread Kitchen’s Bakers in Training program at the behest of a friend.

“I’ve already learned so much about so many breads I never knew about before, like nan and lavash,” says Sango, 25. She also appreciates the chance to improve both her English and her interviewing skills through organized workshops and hopes to one day open her own small bakery.

Jessamyn Waldman Rodriguez, a Canadian living in Harlem, started Hot Bread Kitchen in her own small kitchen in 2007. Rodriguez, 39, grew up baking challah in Toronto with her mother and, as a passionate foodie, has long loved bread making; plus, she has always been interested in social justice. So she came up with a vision for a baking collective that would support low-income and immigrant women.

“Fresh-baked bread is wonderful – it is an expression of true love and the most elemental of foods,” says Rodriguez. Because most cultures have a staple starch, she says, people quickly “get” the idea behind Hot Bread Kitchen. “They have a mother, a grandmother, an aunt or a sister who bakes fresh bread for them, and they can feel the love baked into our mission.”

Rodriguez found the idea of women baking together while helping one another so powerful that she made Hot Bread Kitchen into a non-profit: There’s a commercial bakery, which operates out of La Marqueta in East Harlem and bakes and sells dozens of breads from around the world, from Jewish bialys to Moroccan m’smen (their most popular product); there’s a small-business culinary incubator, which provides a shared kitchen and educational workshops; and there’s the Bakers in Training program, which employs women in nine-month teaching cycles at a storefront bakery in Brooklyn.

Many of the women involved in the training program are new immigrants, have little formal professional experience or have been incarcerated in the past – all barriers to employment. Post-graduation, women are placed in full-time jobs with benefits, often with corporate food-industry partners like Whole Foods and Fairway Market. Hot Bread Kitchen has now trained over 100 women from 26 countries and has a staff of 60 people.

In October, Rodriguez published The Hot Bread Kitchen Cookbook, a collection of recipes and first-person stories from the bakery. “I now feel like I have an artifact for what the dream really was and is,” she says. In addition to recipes for, and dreamy pictures of, whole-wheat chapatis, pan de muertos and olive boules, there are complementary recipes like Reubens with Sriracha Special Sauce and Grilled Cheese French Toast.

Rodriguez grew up in Toronto, but she moved to New York City in 2002 to pursue a master’s degree in public administration at Columbia University. She later did stints at both the United Nations, doing research on migration and human trafficking, and Canada’s Department of Foreign Affairs, in the land-mine division. “But the whole time, this baking idea was proofing in my mind,” she says.

She decided to start with tortillas, as she had lived in Latin America and developed an appreciation for the technique of hand-grinding the masa and then hand-pressing each tortilla. So, in New York, she sought out women who could replicate those tortillas. When that became too labour-intensive – and too expensive – she invested in a tortilla production line. Nancy Mendez, a Hot Bread Kitchen graduate who has been making corn tortillas since she was a 12-year-old living in Puebla, Mexico, now oversees that line and can adjust the dough by simple touch.

Marie Poisson, 64, a Haitian immigrant, had never worked in a kitchen before she joined Hot Bread Kitchen in 2010. Now a graduate of the program, she helps supervise trainees. “It’s so helpful for immigrants like me,” she says. “It gives me opportunities and the power to change things.” Rodriguez’s work is not without its challenges. She no longer bakes every day; she deals with operational details instead. “Bread is time-sensitive, temperature-sensitive and logistically complicated,” she says. “I always joke that my next project will involve laundry.”

Still, she has set her sights on expansion. Hot Bread Kitchen just increased its space in East Harlem by 50 percent to 700 square metres in order to accommodate a bigger culinary incubator. “The women we work with leave with more money than they came in with,” says Rodriguez, “but they also leave with an intangible boost to their self-confidence.”

A BAKER’S STORY: Lutfunnessa Islam
“I moved to America 20 years ago from Bangladesh with a master’s in political science, but my husband didn’t like the idea of me working full-time. So I was a housewife, and I always baked chapatis and made  curries for my family, but I had no professional experience.  Six years ago, a friend gave me a flyer for Hot Bread Kitchen. Now, I teach other women how to make chapatis and other products, help sell our breads at a green-market booth and support my family. My husband got injured, and now I’m the sole breadwinner. Even when I’m really tired, I can always find energy for Hot Bread Kitchen.  I love helping other women.”