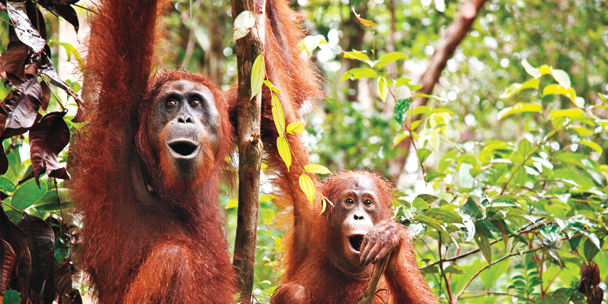 It’s tea time in Borneo, and Canadian Biruté Galdikas has a particularly imposing guest who just swung in from the rainforest. Tom, a 300-pound wild orangutan and alpha male, could quickly turn this party into a deadly encounter if protocol isn’t followed. The softspoken and self-assured 67-year-old Galdikas places a mug of sweet, milky tea within reach of Tom’s massive black leathery fingers. “I have to serve Tom first; orangutans are hierarchical,” she explains. Meanwhile, her eco-tourist guests, who have come here to learn first-hand about Galdikas’ work with wild orangutans, must wait and stay alert: Alpha males are unpredictable, as a visiting Julia Roberts learned when she was momentarily grabbed by one.

When she was two, Galdikas and her Lithuanian parents immigrated to Canada and settled in Toronto, where she grew up. She attended the University of British Columbia and then continued her studies at UCLA, where she met famed paleoanthropologist Louis Leakey. He would later dub Galdikas one of his “trimates,” along with fellow protege primate experts Jane Goodall and Dian Fossey.

Galdikas’ base is Camp Leakey, a research site she founded over 40 years ago to study these great apes in their natural habitat. Located in Borneo’s state-owned 4,150- square-kilometre Tanjung Puting National Park, the camp consists of several utilitarian wood cabins that are painted in lively blues and greens. Close to 200 staff (mostly Indonesian) work here to study and support wild orangutans that move freely throughout the site – including around the feeding station, where bananas and milk are a welcome break from an orangutan’s basic diet of vines and termites. Galdikas reassures visitors that aggressive behaviour toward humans is rare. “I believe that they recognize us as kin,” she says.

Orangutans are an endangered species. There are only two places in the world where these “people of the forest,” as the word means in Malay, roam in the wild: Sumatra and Indonesian Borneo, known as “Kalimantan.” The World Wildlife Fund (WWF) estimates that there are fewer than 50,000 orangutans remaining in the wild – 85 percent of them in Kalimantan – and that’s half the number that existed 60 years ago. With Leakey’s support, Galdikas first came to Borneo when she was a 25-year-old Ph.D. student. The unspoiled beauty made her feel like she had found Eden – despite everpresent leeches, disease-carrying mosquitoes and relentless humidity, she explains matter-of-factly. Her research on the ecology and behaviour of wild orangutans at Tanjung Puting became the subject of her Ph.D. dissertation and landed her on the cover of
National Geographic – twice.

More ELLE World: The sewing and cultural traditions of Nunavut

“I got away with a lot back then,” Galdikas admits, recalling her early days among Indonesians. She smiles at her youthful nerve. “I would march up to a house I suspected of unjustly harbouring an orangutan as a pet and insist on searching it, which I then proceeded to do.” Her gender, she believes, may have worked to her advantage. For one, her boldness caught people off guard, leaving them unsure of how to react. In addition, “no one would have dared touch a woman,” she says. “Back then, it was like I was encased in glass, protected from harm. I would hesitate to do those things now.”

Borneo’s natural world has also changed; it is “in crisis,” according to the WWF, which blames illegal logging, fires and, most significantly, large-scale deforestation to make way for palm-oil plantations. The palm-oil industry not only puts orangutans – who spend 95 percent of their lives in trees – at risk by destroying their habitat but also contributes to violent deaths. “In their search for food, orangutans wander into plantations and are killed or maimed by workers – by beating or machete – leaving orphaned babies,” says Galdikas. The WWF estimates that Borneo is on track to become the top global producer of palm oil, which is an ingredient in many packaged goods and projected to become the world’s most popular edible oil by 2016.

What poses the greatest danger to orangutans? Find out on the next page…

The day after her “tea party,” Galdikas escorts her visitors from Camp Leakey to the village of Pasir Panjang – a journey that includes a two-hour trip by traditional wooden riverboat – where she has created the Orangutan Care Center and Quarantine, a rehabilitate- and release destination for injured and orphaned orangutans. As she walks about the centre with a slow, ambling motion not unlike the animals she lives among, Galdikas laments that the facility is hopelessly overcrowded. Originally built to house 40 orangutans, it is now home to 340 and counting. A listless adult male is slumped in his enclosure. He turns his head, as if using his ears to see; repeated blows to the head (by palm oil workers) left him blind.

Elsewhere, dozens of youthful, sparkling black eyes peer expectantly through the wooden slats of sleeping cages – 90 percent of the orangutans are orphans whose mothers were killed in palm fields. Raising these babies is a challenge for human caretakers. Young orangutans are highly dependent on their mothers; they are sometimes carried until they are five years old and nursed until eight. At the centre, they must be bottlefed and carried by human surrogate mothers for years until they can care for themselves in the wild.

If the deforestation continues at its current rate, the WWF expects that orangutan populations will become too small and fragmented to ensure the survival of the species. Yet Galdikas forges on. She relies exclusively on donations through her charity, Orangutan Foundation International (orangutan.org), to help protect the animals and their habitat. Galdikas also depends on volunteers, many of whom are former students of hers from Simon Fraser University, where she has taught since 1981. She returns to the B.C. campus every year for four months to teach courses in primate behaviour and human origins. Her efforts have not gone unnoticed: She was presented with the United Nations Global 500 Award in 1993, and she received the Order of Canada in 1995.

More ELLE World: Standing up for child rape in Kenya

“I am worried about the future of orangutans,” concedes Galdikas, who must always walk a fine line between outspoken advocacy and quiet diplomacy. “I don’t know what title I would give my book now,” she says, referring to her 1996 autobiography,
Reflections of Eden. “Sometimes negative words do come into my head, but I don’t like to express them aloud. That is not the Indonesian way.” (The conservation group Rainforest Action Network believes that the Indonesian government shows little ability or inclination to enforce its own laws that address deforestation and habitat loss.)

“The people of Borneo seek to preserve harmony above all else,” continues Galdikas, explaining that “harmony” is viewed as a fragile layer of society that prevents things from running “amok,” a Malay word that, like “orangutan,” has found its way into the English language. For now, at least, in the fading afternoon light, Galdikas and Tom sit serenely on the porch of her Camp Leakey home and the peace of the forest seems to prevail.

A roundup of Canadians making a difference around the world

ELLE World: A closer look at the garment industry