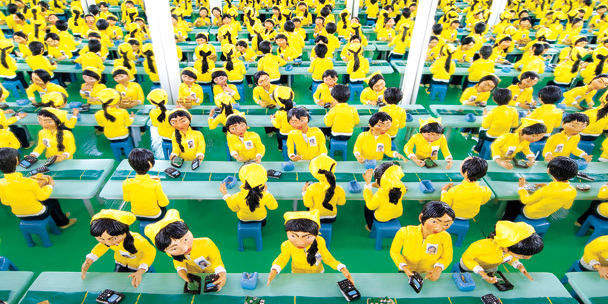 As a sculptor, a reporter and an activist, Karine Giboulo combines fantasy and real life to produce works with remarkable detail, scope and sly social commentary. Whether it’s a single scene or a room-size diorama that depicts life in a Chinese factory town, Giboulo’s art deals with the human condition in all its beautiful, dirty glory.


Writing a new futre for the WOMEN OF AFGHANISTAN

The 34-year-old
Montreal-based artist shapes, bakes and paints polymer clay into Lilliputian figurines, which she then combines with wood, Plexiglas and even discarded materials, like plastic shards, that she collects during her
travels in Africa, India, China and Haiti. At first glance, the colourful scenes look like they belong in a child’s dollhouse, but when you take a closer look, a more nuanced picture emerges.

In one diorama, called All You Can Eat, blue-clad factory workers morph into a flood of individual figures: A female worker, visibly fatigued, cradles her pregnant belly at the end of a long day; a couple steal a quiet moment under the stars before they go to separate tiny dormitories.


Women in the workplace: a closer look at the CLOTHING INDUSTRY

In Democracy Village, which was inspired by the real life giant slum in Port-au-Prince, Haiti, a shantytown jostles up against a sparkling glass skyscraper. Families dressed in tatters stand in front of one-room huts while high above them, primped, plump groundhogs—Giboulo’s stand-in for greedy consumers—gambol around a pool and gorge at tables filled with hamburgers and petits fours.

Giboulo’s works are part of major collections in Ontario and Quebec, but a retrospective at the McMichael Canadian Art Collection in Kleinburg, Ont., last winter introduced her work to a broader audience. ELLE Canada recently chatted with the sculptor about her inspirations, travels and fascination with groundhogs.

Read the invterview with Karine Giboulo on the next page…

Are you largely self-taught?
“I studied a bit here and there—one semester of fine arts at CEGEP [Quebec junior college], a course in photography at another college, art history at the Université de Montréal, engraving at the city’s Saidye Bronfman Centre—but never for very long. I’ve always had my own vision of what I want to do. It’s like I’m a reporter who thinks in 3-D.”

GALLERY: 160 girls speak out in Kenya

Is that why you sculpt?
“When I started, I told stories through paintings. Then one day I produced figurines in polymer clay and I found they attracted more attention than canvases. People lingered around them and spoke among themselves. It was a revelation. I also love working in clay; it’s more natural for me.”

You’ve travelled extensively. What place stands out?
“The shantytown in Haiti is one of the worst I’ve ever seen. I kept asking ‘Is this really called Democracy Village?’ At my hotel, people would swim in the pool, nibble on hors d’oeuvres and sip cocktails while close by, the challenge each day was to eat and find water to drink, period."

5 Canadian artists you need to know

What prompted you to produce a diorama about a slum?
“In 2009, I visited Kibera, an urban slum in Nairobi. There was a woman sitting in front of her shack, which had been decorated with old electrical wires. This struck me—the idea of a house, the dream of a home as we know it. She needed to make her home her own and she used the things that were available to do so.”

The artist with a Haitian resident she met while researching her piece.

How long does it take you to complete a project?

“For dioramas, at least two years. One figure can take me a whole day—the shaping, baking, finishing and painting.”

How did groundhogs come to symbolize consumer culture in your sculptures?

“I like to use fantasy in my work, and groundhogs are animals whose primary goal is to take care of themselves. They also live underground, which is sort of the equivalent to burying your head in the sand— given a choice, many people don’t like to face that there is suffering in the world.”

Which artists have influenced you?

“I adore [Edward] Burtynsky, with his
otherworldly photographs of industrial landscapes. And, as strange as this may sound, I love Anthony Bourdain.”

“Yes. I admire his fearlessness and sense of adventure. He will try anything, no matter how gross. And he’s funny and uncompromising.”

Where would you like to go for your next trip?

“I want to visit Israel. I’m fascinated by its history and politics.”

What do you hope people take away from your work?

“I want them to stop and feel. I want them to be delighted and to think about their own role in the world. Change doesn’t happen without
individual action."