Beaches and salsa? Check. But there’s so much more to stylish Puerto Rico. 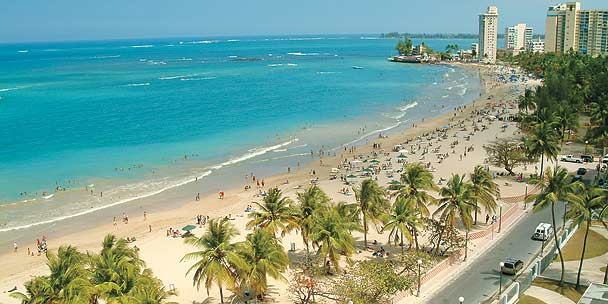 If you were to ask a crowd of stylish jetsetters to list the top elements of their top destinations, they’d likely end up describing Puerto Rico. Known as La Isla del Encanto (The Island of Enchantment), it offers the kind of scenery you’d expect from a Caribbean island (beaches, rainforests, mountains), as well as hits of Latin glamour (cobblestoned streets and chic boutiques). In part, that’s because of its history. It was originally settled by the Spanish, which accounts for the lovely stucco architecture and the friendliness of its people, and it has been a commonwealth of the United States since 1952, so it offers all the comforts of home and many locals speak English. Start your visit in the cosmopolitan capital: San Juan’s north end borders the beach for almost its entire length, so you can pop into boutiques and take a sunbathing break to admire your purchases. (Or buy a bikini and brave the waves!) Take a half-hour stroll to Old San Juan, a popular city with a colonial Spanish vibe. Browse the markets for colourful beaded jewellery and stop in at an open-air café for a nice-cold rum and Coke. (Rum, both white and dark, is the island’s drink of choice — about 80 percent of the world’s rum production takes place in Puerto Rico.) Piñones, a 25-minute drive east of Old San Juan, is a must-visit, where rustic roadside stalls serve up fire-roasted pork and fresh pineapple.

Where to stay
Located in he fashionable Isla Verde district, El San Juan Hotel & Casino recalls the big-band days of the 1940s, with art deco marble columns and vintage crystal chandeliers. It also as the hottest dance floor on the island — salsa bands play until 3 a.m. most nights. If you prefer something quieter, the lemon-yellow Hotel El Convento, housed in a former 17th-century convent, has a laid-back European feel. The polished marble floors gleam, the open-air arches let in the sunshine, and the leafy courtyard houses several excellent restaurants, including Café Bohemio, which holds regular rum tastings.

Where to shop
Nestled among nightclubs and hotels, El Condado is an upscale area of charming mansions, many of which have been converted into shops — you can buy anything from the latest Cartier sunglasses to pretty, patterned sundresses made on the island. And, because of Puerto Rico’s American connection, you’re never too far from a shopping centre: Plaza Las Americas is the largest mall in the Caribbean, offering favourites like Macy’s alongside boutiques like Gucci and Louis Vuitton. Where to dine Aguaviva, in Old San Juan, has a young, hip clientele and specializes in "seaside Latino” cuisine. It features a raw bar, an oyster bar and a “ceviche bar,” which offers delicious seafood salads tossed with citrus and herbs. Try them all if you can, but make sure to order the Crispy Whole Red Snapper filled with Lobster Mofongo — a plantain dish mashed with bacon and, in this case, lobster.

Where to spa
At the Edouard de Paris Salon and Spa at El San Juan Hotel & Casino, ask to experience your treatment in one of the white pavilions overlooking the beach. A must-try? The mojito massage with fresh mint, lime and organic essential oils. Getting there San Juan is a 2½-hour flight from Miami. Visit gotopuertorico.com for details.

CHIC RETREAT
For shopping and partying, San Juan is where it’s at, but Puerto Rico’s countryside — about 30 minutes from the city — is the perfect place to get away from it all.

•HOT HOTEL The Gran Meliá Puerto Rico Resort sits on Coco Beach, near the mountainous El Yunque national Rainforest. Take a dip in the lagoon-style pool, or lounge on a hammock strung between tall palms and watch tiny hermit crabs in jewellike shells scurry across the sand.

•COOL RESTAURANTS Richie’s, an upscale seafood restaurant on a mountaintop in Rio Grande, offers just-caught lobster and lovely coastline views. For something more low-key, pull up a chair at the covered patio of Antojitos Puertorriqueños and order an icy mojito and stewed crab with rice and beans.

•NATURE MUST-DOS The only tropical rainforest national park in the United States, El Yunque National Rainforest is home to coqui frogs, which tweet and twitter into the night. In nearby Fajardo, Las Croabas Lagoon boasts one of the world’s most extraordinary ecosystems. Billions of plankton glow in the dark when they’re disturbed — if you move your hand through the water, the fish flash just below the surface. Book a nighttime kayak tour, which travels up a channel of mangroves and into the lagoon itself.

NATIVE SON
Designer Gustavo Arango may live in New York, but he still calls his native Puerto Rico home. Arango started his fashion career in the early ’90s as an assistant fashion designer for Pierre Balmain and then worked for Bill Blass before starting his own namesake label in 1993. Arango still returns to Puerto Rico a few times a month to meet with clients at his San Juan flagship stores. “Puerto Rico inspires me,” he says. “My clients come back to me because I give them a sense of exclusivity with my clothes. It allows me to cross over into art, and in this industry that’s a good feeling.”