Get up close to some of the world's most fascinating wildlife in Kenya on four different types of safari.

by : Jennifer Weatherhead Harrington- May 9th, 2014 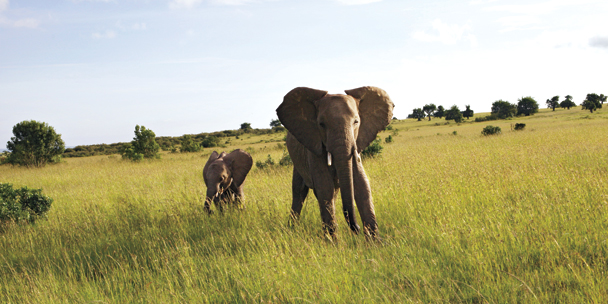 Two elephants spotted while on safari. Photography by Justin Harrington.

I know that I should be clicking, taking picture after picture, but I’m frozen in awe. Just a few metres from the open-air Jeep in which I’m sitting, a female elephant and her month-old calf are using their trunks to feast on golden grasses. I’m so close, I can see the wrinkles and folds in their dark-grey skin and hear their huffs and snorts as they chew. Behind them, 33 other members of the herd are meandering across a small slope, chomping away. I can feel my heart pounding beneath my rib cage. It’s the first time I’ve seen so many elephants all at once and this close. I finally manage to take a few pictures, and then I consciously put my camera down and take a deep breath. I need to make sure I capture this moment in my mind too.

It’s my third day on safari in Kenya; I’m travelling from dusty Samburu in the north to the expansive plains of the Masai Mara, along the Tanzanian border, to the rolling green hills of Tsavo National Park in the south. Kenya is often touted as one of the best spots to see African wildlife thanks to the yearly migration of over two million animals from the Serengeti in Tanzania across the Mara River to Kenya and back—the migration of the wildebeests alone has been named the seventh New Wonder of the World. And there’s more than one way to take it all in: The word “safari” means “long journey” in Swahili, and it’s used to describe any kind of travel, from
horseback riding to walking to driving. Here’s my take on all of the above.

The grounds of the Mount Kenya Safari Club.

I spent my first safari morning on a horse named Geronimo who liked to buck as we headed down rocky slopes. My 5:30 a.m. wake-up call at the Mount Kenya Safari Club (one of Ernest Hemingway’s favourite African haunts) was timed so that our group of five riders would hear the morning birdsong and experience the sunrise. Soon, we came across a herd of grazing buffalo that stared at us quizzically, their ears flapping away flies. Later, we spotted wildebeests running through fields, giraffes nibbling at treetops and elephants making their way up a grassy hill. The downside to a horseback-riding safari is that you don’t get as close to the wildlife as you would if you were to travel by Jeep—plus, the bumpy ride makes picture-taking nearly impossible. But knowing that there was nothing between me and the animals made it all the more thrilling. (I was also reassured when John, our guide, explained that the wildlife are unable to distinguish riders from their horses, so as long as we remained quiet and still, we wouldn’t be seen as a threat.)

Picture-perfect moment: Watching the sun’s rays peek over Mount Kenya (the second-highest peak in Africa, next to Kilimanjaro) and dip into the valley.

A male lion making his way through the tall grass of the Masai Mara plains. Photography by Justin Harrington.

I never imagined I’d do a walking safari, but after a day on a horse, I was starting to feel bowlegged, so I was glad to get out on my own two feet. (I was also relieved to see that an armed ranger was escorting our small group.) The 111,200 hectares of rolling hills and flat plains that surround the 20-bed ol Donyo Lodge, located in the Chyulu Hills, southeast of Nairobi, make it an ideal base for a walking safari. While we (thankfully) didn’t get too close to animals, I did get to experience their natural habitat. One of our first stops was at a “toothbrush tree”—so named because the local Masai people use the branches to clean their teeth. As I scrubbed my own teeth with a spicy-flavoured green branch, a tower (or family) of giraffes ambled by just a few hundred metres away. At the end of our two-hour walk, we arrived at a large tree where the hotel staff had prepared a fully-decked-out “bush breakfast” of scrambled eggs, yogourt topped with fresh berries and piping-hot strong Kenyan coffee.

Picture-perfect moment: Coming up over a small hill to see the expansive plains and, in the distance, Mount Kilimanjaro stretching toward the sky.

Outdoor seating at the Elephant Bedroom Camp in Samburu.

Now that I was feeling like a bit of a safari pro, I was ready for eight hours in the Kenyan wilderness. My mission? To see all of the big five (lion, leopard, rhino, elephant and Cape buffalo). At this point, I’d seen all but the leopard, so an open-air Jeep trip would be the best way to see one, and other animals, up close. Halfway through our all-day trek, our ranger pulled the Jeep up next to a tree on the plains of the Masai Mara (Kenya’s largest and most famous national reserve). At first, I didn’t see anything. He pointed out eight lions—cubs and mothers—stretched out lazily in a slice of shade in the tall grasses. His ability to pinpoint wildlife was astounding—on another day, he spotted a Thomson’s gazelle giving birth when all I saw, without binoculars, was an inanimate speck in the distance. A few days later, I went on an evening safari at the aptly named Elephant Bedroom Camp in the
desert-like region of Samburu, which is also in “leopard country”: The rocky cliffs, caves and huge acacia trees make for perfect lounging and hiding spots. Two more days of safaris didn’t turn up the solitary leopard, but I wasn’t disappointed—I’d had close encounters with more elephants and giraffes than I ever could have imagined.

Picture-perfect moment: Seeing a lion cub stretch up lovingly to rub his head under his mother’s chin.

The most exciting way to experience Kenya on the next page…

For next time: A safari from the air

A hot-air-balloon safari is still on my
must-do list. It’s one of the newest safari trends, and the best time to do it is during migration season. Between July and September, you can see the plains marked with the migration tracks of topis, impala, antelope and zebras. You might also get an aerial view of hippos cooling off in the Mara River, thousands of wildebeests…and maybe even the elusive leopard. (The Fairmont Masai Mara Safari Club’s balloon safaris run all year, except from April to June.)

GALLERY: 12 stylish PASSPORT COVERS to own

A mother elephant and her calf in the Samburu National Reserve. Photography by Justin Harrington.

Nearly 35,000 elephants are killed each year in Africa for their ivory tusks; the lion population has dropped by 75 percent outside the parks in the past 20 years to just 35,000 due to poaching; and the western black rhino was officially deemed extinct in 2013. That’s why fine-art photographer Nick Brandt and ol Donyo Lodge founder Richard Bonham started the non-profit Big Life Foundation in 2010. The organization employs local Kenyans as rangers who patrol more than 809,000 hectares of Kenyan and Tanzanian countryside from 31 anti-poaching camps to help track and protect the most endangered wildlife. Sister charity Big Life Foundation Canada (
biglife.org) was established in 2012 and is raising funds for a new rapid-response mobile team in Oltiseka, Kenya—it costs approximately US$145,000 to establish and maintain this team for a year.