There's always something to explore and taste in Bangkok—the city that never stops eating. 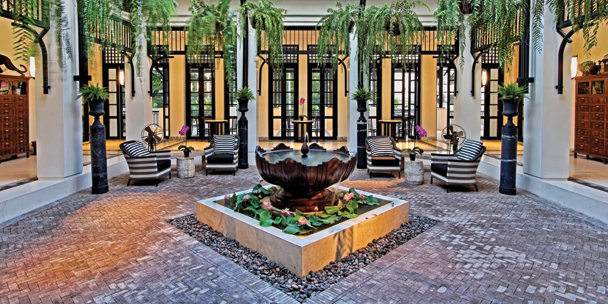 I was eagerly anticipating the cacophony of exotic sounds, sights and flavours on my late-night tasting tour of Bangkok’s Chinatown. But as I made my way through a crowded side street just off Yaowarat Road, I froze in place as a man squeezed by me. He was riding a bike with one hand and precariously dangling a small (but flaming!) charcoal stove in the other. The heat radiated over me as he brushed by. My guide, Scott Coates, and I just looked at each other and burst into laughter at the absurdity. “All sorts of stuff goes down at night, but I have never seen
that before,” he said of the 10-plus years he has spent here as a co-owner and guide at the Thai-based, Canadian-owned Smiling Albino
adventure tour company. “That’s the best thing about Bangkok—it constantly surprises.”

My curiosity was piqued at every turn—as were my taste buds. One afternoon, after a long-tail-boat ride on the Khlong Saen Saeb canal, I snacked on warm coconut custards (
khanom krok) cooked by a street vendor beneath a black tangle of overhead wires. Another evening, after being awed by
several of the city’s extravagant porcelain-clad Buddhist temples, I dug into a divine but laid-back dinner of twice-cooked organic pork ribs and pomelo salad with slipper lobster at the Siam Hotel’s Chon Thai Restaurant. My only regret? Not having the nerve to try the super-smelly (but apparently delectably creamy) durian fruit on offer that first night in Chinatown.

Canadian-born, Bangkok-based architect and designer Bill Bensley worked closely with the Sukosol family—a well-known Thai hotelier clan who are also involved in the local music scene (Krissada Sukosol Clapp is a Thai rock star)—to bring their vision for the Siam to life in 2012. The 1.2-hectare resort sits on the Chao Phraya River and has just 39 bespoke guest rooms (including 11 villas with private pools). The property is thoughtfully filled with the family’s own collection of antiques and artwork, making you feel like you’ve been invited into their luxe private home.

If you’re looking to be closer to the action, the Sukosol Hotel—which is filled with more of the family’s museum-worthy heirlooms—is located right in the heart of the city and less than a block from the Skytrain. Book a table at the hotel’s Lin-Fa Chinese Restaurant and order the savoury Peking duck served with rice-flour pancakes.

Find out how to explore Bangkok on the next page…

The view of Wat Arun (the Temple of Dawn) from the Amorosa bar. Photography by Christina Reynolds.

Where to drink
Most tourists opt for an evening cocktail at the posh (and packed) open-air Sky Bar at the top of the Lebua Hotel. Instead, Scott Coates of Smiling Albino tours guided me to Amorosa, a small bar located on the Chao Phraya River, where we easily snagged a window table looking out at the beautifully illuminated Wat Arun (the Temple of Dawn).

Where to explore
After dining in the Siam’s Chon Thai Restaurant—which was constructed out of three antique teakwood stilt houses that American spy turned silk trader Jim Thompson once helped move—I had to check out Thompson’s own Thai-style home and ’60s hot spot (now a museum). Constructed from six stilt houses in 1959, it has remained unchanged since Thompson’s mysterious disappearance in 1967.

Where to shop
Wander the semi-covered alleyways of Chatuchak weekend market—packed with virtually everything imaginable, it’s as much a cultural experience as a shopping one. For more purposeful spending, head to Terminal 21, an airport-themed mall with an eclectic mix of independent stores featuring goods by Thai fashion designers and artists.