There's no better place to take your honeymoon than a surfing trip to the island of Hawaii. Get ready to say Aloha! 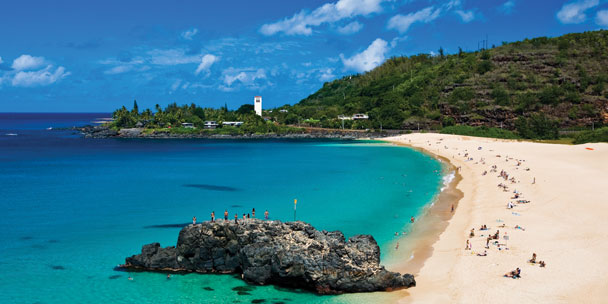 Surfing is dangerous. That’s the thought that keeps racing through my mind as my instructor, Jack, goes over a long list of dos and don’ts. “Do grab the safety rope attached to the orange buoy after you finish a ride,” he says seriously. “Otherwise you could be washed out to sea.” Absolutely do not touch the bottom of the ocean floor with your feet. “There is coral reef that will cut you up and sharks that rest underneath it,” he adds.

It’s day three of my
honeymoon in Oahu, Hawaii, and my husband, Erik, and I have vowed to be adventurous—but sharks are a little bit more than we bargained for. “I have a cut on my arm,” whispers Erik. “Do you think that will attract great whites?” We mount our foam surfboards and start paddling out. It’s a windy day and it’s not long before we’re swept out into the surf, the crowds sunning on Waikiki Beach receding in the distance. “Do you see that?” Jack asks me, pointing to a flurry of movement a couple hundred metres away. “Those are dolphins jumping!”

On my first run, I barely make it into a kneeling position before tumbling head-first into the water. I find my surfboard and struggle to paddle to the orange buoy, snorting salt water out of my nose. Three runs later, I manage to stand up—for a fleeting second—before taking a dive. My arms are sore from paddling, and the waves keep knocking my surfboard off course, but I’m exhilarated. “Is my husband still alive?” I call out weakly to Jack. “He’s just fine,” he responds, laughing.

Later, exhausted, sunburned and ravenous, Erik and I visit Tropics Bar & Grill at our hotel, the Hilton Hawaiian Village. We vow to continue with our adventurous streak by dining only on local delicacies: We order ahi tuna poke (a spicy sashimi salad served over rice), Kahuku sea asparagus and charred mahi-mahi fish tacos and toast our first surfing adventure with Blue Hawaii cocktails (which were invented at our hotel).

The next morning, we meet Colin, our guide, for a hike to the Makapu’u Lighthouse, which rests atop a mountain made of volcanic rock. The scenery is breathtaking: all lush green peaks and uninterrupted views of the Molokai Channel. “From December until April, this is the best place to watch humpback whales migrate,” Colin tells us as a gecko scurries by. “It’s got one of the most amazing views on the island. During the Second World War, Makapu’u was used as a lookout point by the military.” At the top of the mountain, we visit an abandoned bunker that’s strategically positioned to have a view of the shoreline, where the Japanese would have landed to invade Honolulu. Everything is so picturesque that it’s almost impossible to imagine anything disrupting the quiet landscape.

The pool at the Hilton Hawaiian Village.

A couple of days later, Erik and I drive to the North Shore to explore the countryside. The beach at our hotel, Turtle Bay, was used as the backlot for the TV show
Lost, and we’re delighted to find ourselves on the spot where Oceanic Flight 815 landed. “When they first started filming the plane wreck, locals thought it was real,” Carlos, our
horseback-riding guide, tells us. “People were calling 911!” As we trot down the beach, Carlos pauses to show off some of the lush local plant life. “This is naupaka, but we call it the lovers’ flower,” he says, pointing to a pink bloom that looks like it has been sliced in half. “They grow as if they’ve been split down the middle. You can find the left side on the beach and the right side growing in the mountains.” According to local legend, a pair of star-crossed lovers from rival tribes were separated— one was banished to the sea, the other to the bluffs. “When you join the two halves of the naupaka flower, it glows purple,” says Carlos. “I’ve tried it myself—it’s true!”

It’s no surprise that romantic stories reign supreme in Oahu. As Erik and I watch the sunset on the beach, sipping umbrella drinks and listening to the soundtrack of the North Shore’s enormous crashing waves, the prospect of “happily ever after” seems just about right.

Visiting the town of Waikiki

The vibe: There’s a city-in-paradise feel to Waikiki, where you can shop at Hermès and Louis Vuitton and then walk back to your hotel barefoot in the sand.

What to eat: You can find a variety of cuisines on Oahu—from fine dining (try the eight-course tasting menu with wine pairings at Chef Mavro) to low-key diners. We loved the Street Side Inn, an Anthony Bourdain-approved dive. Try the spicy chicken, a deep-fried dish so delicious that you won’t even mind later on when your stomach sticks out while you’re lying on the beach.

What to do: Relax on Waikiki’s famous white-sand beaches or, if you feel like a workout, schedule a stand-up-paddle-boarding lesson at the Hilton Hawaiian Village.

Where to stay: The palatial Moana Surfrider first opened in 1901 and has hosted everyone from Frank Sinatra to Lucille Ball. Have a cocktail in the courtyard under the hotel’s enormous Banyan tree. (There’s live Hawaiian music after 6 p.m. every night.) Book a couples Lomi Lomi Ola massage (the traditional Hawaiian healing treatment) in an airy room overlooking the water at the Moana Lani Spa for a fully relaxing experience.

The vibe: The Hawaiian countryside is so pristine that you’ll feel like you’ve wandered onto the set of Jurassic Park (which was, in fact, filmed here).

What to eat: Food trucks and fruit stands are everywhere on this side of the island. Giovanni’s Shrimp Truck boasts shrimp caught on the North Shore, but be prepared for a wait. People come from far and wide to taste Giovanni’s garlic specialty. For the best fruit in Oahu, stop at any roadside stand. The pineapple and mango will bring tears to your eyes and leave you reminiscing for years.

What to do: Board a six-wheel Swiss Pinzgauer at Kuolao Ranch for the Jungle Expedition Tour through Oahu’s scenic Hakipu’u Valley—many movies, from 50 First Dates to Godzilla, were filmed here.

Where to stay: Turtle Bay Resort was featured in some of Hollywood’s most successful films. It had a starring role in Forgetting Sarah Marshall, and The Hunger Games: Catching Fire was filmed in one of its private coves. Visit Surfer, the Bar for some late-night debauchery: Its Tuesday open-mic night is legendary.