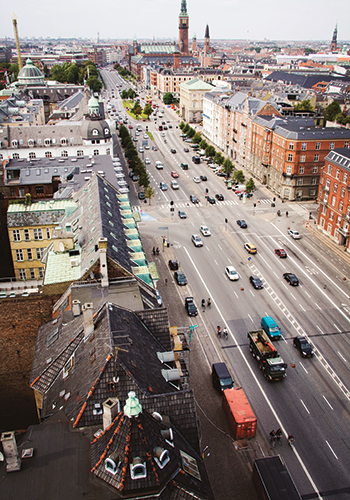 With its cobblestone streets and plentiful bike lanes, Copenhagen is built for flats, not stilettos. So to check out the city’s spring/summer 2015 Fashion Week, I didn’t bother packing the Valentino heels that were ubiquitous in the front rows of the major fall shows just months prior. Instead, I opted for black-and-white Nikes and fit in seamlessly with the laid-back-chic locals as I navigated this stylish hub that is primed to rival Milan and Paris as the cool-girl fashion capital of Europe.

For more than a half a century, Denmark has been synonymous with avant-garde design, characterized by the modernist architecture and furniture styles made popular worldwide by Arne Jacobsen. But over the past decade, cutting-edge fashion designers like Malene Birger and Henrik Vibskov have taken the torch, and today Copenhagen Fashion Week, held every February and August, is the largest fashion event in Northern Europe.

In the vast square outside the palatial turn-of-the-century City Hall—the main venue for the runway shows—the appeal of the unpretentiously stylish citizenry is especially apparent. Photographers crowd around to capture local It girls draped in elegant silk T-shirts, roomy trousers, soft pleated skirts and breezy cotton tunics—there’s nary an ostentatious hat or neon fur accessory in sight. And in this city of 1.3 million, where almost half commute by bike, even the style set—their feet clad in Chanel sneakers—pedal to fashion events, past modern art galleries and landmarks such as the 19th-century amusement park Tivoli Gardens.

“The Danes have an easy approach to dressing,” confirms Freya Dalsjö, an up-and-coming designer whose show is one of the most hotly anticipated of the week. “They want to look good but be comfortable and practical.”

It’s not the only difference I encounter: Here, there’s a noticeable absence of carefully guarded guest lists. The Copenhagen Fashion Festival, which coincides with the runway presentations, offers an assortment of more than 200 exhibitions, parties, competitions and shows trumpeting the inviting tag line “Open to all.” Events such as the Global Fashion Exchange (a giant luxury clothing swap) and #streetstyleride (a stylish bike tour) are unticketed and welcome tourists and local scenesters in addition to international buyers and journalists.

Reciprocally, Danish designers take the public into great consideration when imagining their collections. “When I design, it’s very much about the women I see on the street and work with,” says Ditte Reffstrup, creative director for Ganni, which is building an international following devoted to its whimsical yet wearable staples. As the city’s style scene matures, other designers are challenging any single definition of what it means to be a Danish fashion brand. For her spring/summer 2015 collection, Dalsjö broke out with more daring touches, like coloured fur and beaded embellishments. When I ask her whether she has found it difficult to be different, she doesn’t hesitate to say that she feels “very supported.” That’s the thing about Denmark’s creative capital: It really is open to all.

Best snacks: The impossibly cool husband-and-wife team behind Ganni served up popcorn and boozy slurpees at their presentation. They were the perfect refreshers for the show’s sunny locale: a private rooftop tennis court at the Hotel Mercur.

Best reason to get drenched: Henrik Vibskov surprised his guests by showing his collection alongside a performance by the Norwegian National Ballet—in a 150-square-metre shallow pool. There wasn’t a dry foot in the front row, but, trust, it was worth it.

Where to stay: If you’re looking for charm, you’ll find it in spades at the world’s smallest hotel in Copenhagen’s hipster Vesterbro ’hood. The Central Hotel is a homey one-room abode decked out with vintage fixtures and Tromborg skincare amenities, and it’s set above an equally quaint café. Or, spread out at Hotel SP34, located on the edge of Ørstedsparken, a sprawling crocus-bloom-filled public green space in the city centre. The hotel features the best of modern Danish design, including sleek leather-clad colonial chairs from Ole Wanscher and wood café tables by Nanna Ditzel.

Where to shop: Wander through the spacious open-concept flagship for Danish brand Wood Wood in the Strøget shopping district, where cobblestone streets are reserved for pedestrians, cyclists and a fair share of buskers. Shop for smart streetwear separates alongside hand-picked pieces from Comme des Garçons, Carven and Jacquemus. Then, travel back in time (and about five minutes by foot westward) to hunt for treasure at Time’s Up Vintage, a curated collection of high-end fashion finds from decades past—think floral Moschino frocks from the ’90s and authentic Japanese kimonos from the ’60s and ’70s.

Where to eat: Boasting the most Michelin-starred restaurants of any city in Scandinavia (17 stars were awarded in 2014), Copenhagen presents the very happy predicament of being spoiled for choice. Where to start? Book a table at No. 2, the younger sibling of gourmet Restaurant AOC, for a locavore take on New Nordic Cuisine. Must-try: the Danish beef tenderloin and vibrant salt-baked beetroot.

Where to explore: Rent a car and head north along the coast to nearby Humlebaek, home of the Louisiana Museum of Modern Art. Situated on an expansive willow-dotted lawn, surrounded by a sculpture garden and with a view of Sweden across the sound, it’s worth a visit just to take in the tranquil pastoral setting.