The ancient kingdom of Jordan has turned a pretty shade of green. 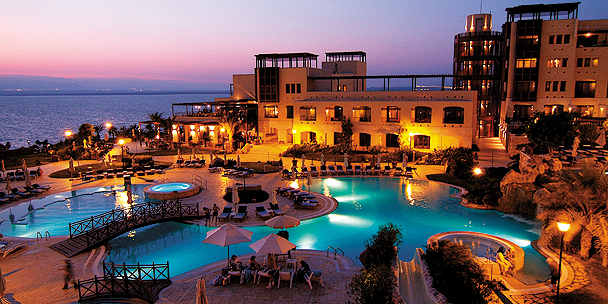 Check out our 5 great girlfriend getaways by clicking here!

The vibe Raw desert light, sparkling white buildings, men swaddled in kaffiyeh, women wearing burkas, street signs for nearby Syria, Iraq and Saudi Arabia…. In the Hashemite Kingdom of Jordan, it’s easy to lose your sense of the West. Listen to the muezzin call the faithful to prayer. Have a steam bath and vigorous massage at Salome Turkish Bath in Petra. Eat mansaf, a Bedouin lamb stew served over rice and garnished with almonds or pine nuts. Drink a glass of arak (an aniseed flavoured eau-de-vie) or some Jordanian wine. Smoke a hookah (a water pipe) in an Amman café, savouring the apple- or grape-flavoured tobacco…and discover an unexpected eco-oasis.

Green acres Since 1966, Jordan has been a leader in eco-tourism in the Middle East. Seven nature reserves welcome rock climbers, hikers, mountain bikers, boaters and birdwatchers. Shaumari Reserve — created in 1975 as a breeding centre for endangered and locally extinct wildlife — is home to ostriches, gazelles, onagers (a member of the horse family) and the nearly mythic Arabian oryx (a large, straight-horned antelope that once faced extinction). The diverse topography of Dana Nature Reserve includes wooded highlands, rocky slopes, gravel plains and vast sand dunes. At the reserve, guests at Wadi Feynan Eco Lodge — which is illuminated only by candles at night — can watch the sun set over the Jordan Rift Valley.

Red rum Wadi Rum, the main desert in Jordan, is made up of red, yellow and orange mountains — which are popular with rock climbers — and steep, sandy valleys. In the early part of the last century, the Welsh-born T. E. Lawrence — better known as “Lawrence of Arabia” — formed an alliance with the Arabs to turn back the Turks and spent much of his time in Wadi Rum. A youthful Peter O’Toole filmed
Lawrence of Arabia here, galloping his camel across the sands where four-by-fours now take visitors “wadi bashing.” In the spring, more than 2,000 species of wild plants and flowers — including poppies, red anemones and the black iris, Jordan’s national flower — bloom in the hills and deserts of Wadi Rum. Eagles and other large birds of prey soar over the hills, and the grey wolf, sand cat and ibex make this lunar landscape their home.

Sink or swim? More than 400 metres below sea level, the Dead Sea — in the Jordan Rift Valley — is the lowest point on earth. Heavy evaporation creates extremely high concentrations of mineral salts, which kill all plant and animal life but make swimmers float like corks. Since ancient times, the mud and mineral-rich waters of the Dead Sea have been known for their beneficial effects on the skin — Cleopatra even extolled their virtues. Today, luxury spas abound and offer a wide range of treatments. The most popular one includes a salt exfoliation and mud wrap, which leave the skin smooth and soft. You will want to fill your suitcase with beauty products from the Dead Sea, but there’s no need to pay duty: they can also be found in Canada. The Rivage line — which is available at The Bay across Canada — is the best known.

What’s your travel style? Take our quiz and find out.

Check out our travel guide for Auckland, New Zealand

South Beach Aqaba is the only coastal city in the country and is located on the Red Sea in the southernmost part of Jordan, between Israel and Saudi Arabia. The winter palace of King Abdullah II and Queen Rania — the reigning monarchs of Jordan — is in Aqaba, and you will find both bikini-clad babes and women in veils on its beaches. With an average water temperature of 23 degrees Celcius, gentle currents and a mild climate, Aqaba has a coral reef that is Nemo heaven, with seasonal visitors such as sea turtles, dolphins, walruses and the solitary whale shark. (This giant plankton-eater is harmless to humans.)

In the pink The most romantic way to see the ancient stone city of Petra is at night. Two evenings a week, the Siq — a narrow canyon that cuts through the mountain leading to Petra — is lit up by more than 2,000 candles, and visitors walk single file in silence to the pink-toned Al Khazneh, the most famous monument in Petra. Bedouin play the flute and the rebab (a stringed instrument) while tourists sit on cushions on the ground and sip mint tea. Al Khazneh means “the treasury,” and for a long time the Bedouin believed that the urn on top of the building contained a treasure, but the building is, in fact, a tomb. More than 2,000 years ago, the inhabitants of Petra — the Nabataeans — buried their dead in the hollowed-out caverns of the cliffs from which they carved Al Khazneh’s facade.

Roman holiday One of the best-preserved Roman cities in the Near East, Jerash boasts a column-lined avenue, an outdoor theatre, public baths and temples — all on a colossal scale. In the hippodrome, former Jordanian soldiers re-enact games that are similar to those the Romans once watched: gladiators in combat, chariot races and military manoeuvres.

Bazaar, bazaar Jordan’s bazaars are overflowing with gold, silver and amber jewellery, camel-hair shawls, handmade glass and furniture made from olive wood or inlaid with mother-of-pearl. Other bargains include Bedouin rugs and tapestries, handwoven baskets, copperware and long-spouted coffee pots. It’s pointless to haggle in the boutiques, but bartering is mandatory in the bazaars’ open-air stalls — you can often reduce the price by half by bargaining.

For more information, check out www.visitjordan.com