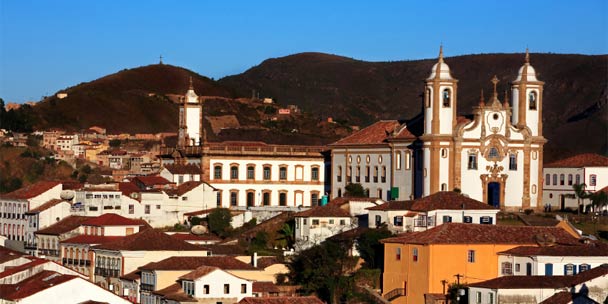 Some cities get all the love. Paris. Rome. London. New York. Then there’s Tokyo, Milan, Los Angeles, Rio. But what about all those uncovered, undiscovered gems just waiting to be embraced? What about all those hidden treasures that offer travelers an exceptional escape, only you never knew this place existed? Well, dear travel enthusiast, that’s all about to change.

Sometimes intrepid explorers shed light on previously unknown destinations. But for me, learning about a lovely little place in Brazil was thanks to American Airlines’ recent expansion of its service into some of South America’s lesser-known cities. Starting last fall, American began serving Belo Horizonte, Salvador de Bahia and Recife, all from their hub in Miami.

I was lucky enough to be on an
American Airlines flight from Miami to Belo Horizonte, on a Boeing 767-300, which boasted 30 fabulous business class seats and 195 seats in the main cabin. American’s new Next Generation business class seats are a sweet treat on long-haul flights (although this flight was only seven hours and 41 minutes); they’re like a cradle – when you recline, there’s no impact on the passenger behind you so you needn’t worry about crowding anyone. And business class passengers each receive a personal touch screen TV, already loaded with tons of movies, television programs, games and music, which really does make the flight, well, fly! Belo Horizonte is a reasonably priced destination for the average traveler so if you want to splurge, a business class seat isn’t a bad option!

Touching down in Belo Horizonte, I couldn’t get over how green and lush everything was. I wasn’t sure what I expected but I was pleasantly surprised by the beautifully verdant landscape. It was immediately obvious that this was a place that was fertile, fervently in bloom and, as I would discover, rich with a love of life.

Just over a century old, Belo Horizonte, which in Portuguese means “beautiful horizon” has a population of about three million (six million if you count the outlying areas) and is the capital of the state of Minas Gerais. Yearly average temperatures range between 9°C (48.2°F) and 35°C (95°F) and you mustn’t forget that the seasons down there are opposite to ours in North America, a critical point when planning your vacation. So before you head to the southern hemisphere, remember that Belo Horizonte’s summer starts in December, while winter makes its grand debut in June. The coldest month of the year is typically July whereas you can expect sun-scorching days in January. Plan accordingly.

Sure, if you’re heading to Brazil, Rio may top your list of must-see cities. And since Rio is only about a one-hour flight from Belo, there’s no reason you can’t see both. But when Rio is crawling with tourists, Belo Horizonte offers a respite not-so-far from the madding crowds. It’s a quaint corner of the country to discover.

Admittedly, Belo Horizonte is a bit sleepy. If you’re looking for an action-packed getaway, bikini-filled beaches and an explosive nightlife, get thee on a plane to Rio! Despite being Brazil’s third largest city (after Sao Paulo and Rio de Janeiro), Belo Horizonte is quiet but visitors here get a real sense of every day life in Brazil. It’s a great walking city; the many tree-lined streets are lovely and when your feet get tired, the public transportation system (buses and trains) is easily accessible.

There is no shortage of museums to visit in Belo Horizonte: The Museum of Arts and Crafts, Museu Histórico Abílio Barreto and Museu de Ciencias Naturais. But if you find museums a bit of a yawn, my advice is to visit Pampulha. This 1940s neighborhood boasts the charming São Francisco de Assis church, which, from the outside, looks nothing like a church. But the soft curves of its design are inviting and its relatively diminutive size makes it an intimate place of worship.

Praça da Liberdade is a beautiful palm tree-lined area of the city, perfect for a leisurely stroll. The square, providing solace from the bustle of the city, is picture perfect, providing a wonderful place to relax and people watch, one of my favorite pastimes when I travel.

The Savassi area of Belo Horizonte is home to most of the city’s hotels and the neighborhood has dozens of bars, making it a popular hangout for locals and tourists alike. There’s shopping nearby, too, making this spot a good choice when looking for accommodations.

Belo Horizonte isn’t home to all the grand luxury hotels you find in major city centers. But this is part of the charm of this place. You won’t be kicking back at a Four Seasons or Grand Hyatt here but some of the smaller hotels offer guests an experience that feels somehow far more authentic. The lobby of The Liberty Palace hotel is lovely, with marble floors and a prominently positioned, striking staircase. The rooms are small, and frankly, dated in their appearance, but I loved the “realness” of being there. Sleeping in my small single bed in a room that had few amenities, I felt miles away from home and relished the very real feeling of escape. The Lobby Bar is small but the food is good and, situated right by the hotel’s front doors, it’s the perfect place to grab a bite to eat before running out the door to begin your day exploring the city. The exceptionally friendly and accommodating staff more than makes up for the hotel’s decor shortcomings. For more information, visit:
libertypalace.com.br

For me, one of the best parts of traveling is trying new foods. So where should you eat? First, try Xapuri, situated in the Pampulha district. It’s beautifully rustic inside, all aged wood and worn wooden tables and benches. It’s friendly and familiar inside and then … there’s the food. As you sip a Caipirinha, Brazil’s national cocktail, patiently waiting for your food, you probably don’t know anything about the delights that await you. But the local dishes are delish! Sausages, onions, pork medallions in a savory sauce, rice and beans … but the real showstopper was the pumpkin stuffed with chicken stew and oozing with melted cheese. Incredible presentation, incredible taste. Now that was something different!

If you stay at the Liberty Palace hotel, Fogo de Chao is a nearby dining option – and it’s a good thing it’s within walking distance. After gorging yourself at dinner, you’ll need to walk off your meal! Fogo de Chao is a churrascaria and there are now locations around the US so it’s lost a trifle of its foreign appeal. But don’t let that deter you. The food here is delicious and plentiful; be sure to come hungry! The featured meats (of which there are many!) are slow-roasted and are carved tableside by a parade of waiters bringing different cuts right to you. A green card beside your plate means you’re ready for more food but when you’ve reached your limit and had your fill, simply turn it over to the red side, essentially calling ‘mercy’. Bon appétit!

Ouro Preto, which means “black gold”, is about 100 kilometers from Belo Horizonte and is a UNESCO World Heritage Site. A visit to Belo Horizonte would not be complete without at least taking a day trip to this delightfully quaint town. Founded at the close of the 17th century, Ouro Preto was once the capital of the state of Minas Gerais until it was moved in 1897 to Belo Horizonte. This town was at the heart of a gold rush and today, its economy thrives not only on tourism but on the industry of its minerals, like gold, hematite, tourmaline and topaz. The bling-lover in you will adore the jewelry for sale in many of the shops.

Ouro Preto is a university town with a vibrant student culture; read: lots of university-aged kids drinking Brahma and watching soccer on outdoor patios! The buildings here are well-preserved and showcase the beauty of Portuguese architecture, dating back to the days of the town’s colonization. It’s as picturesque as any place you can conjure up in your imagination, lush and green with rolling hills and cobblestone streets. At times, it feels like Europe, the French countryside, to be precise. But it’s a tiny town in Brazil – a small patch of the planet miles away from Europe. Now this kind of discovery is the wonder of travel.

Natalie Bahadur is a Toronto-based writer and editor. She’s a graduate of Ryerson University’s journalism program. She is an avid traveler who loves the thrill of visiting new places and daydreams about where she’ll end up next.