Who can resist an adventurous hike to the Ciudad Perdida, or "Lost City" in the Colombian jungle. 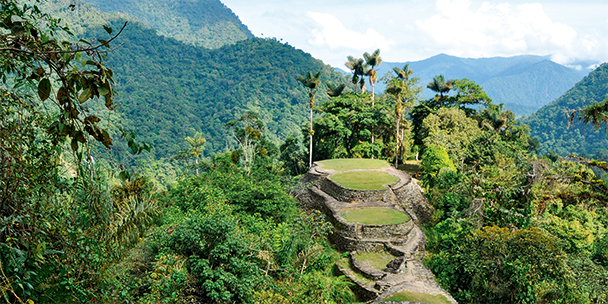 When I set out on a four-day hike through a tropical rainforest in Colombia, I didn’t expect to experience an on-trend beauty moment. Who knew that all it takes is a heart-pounding, butt-crunching climb through the rugged Sierra Nevada mountains to look exactly like one is ready to walk Marques’ Almeida’s fall/winter 2015 runway? Duffy – a Vidal Sassoon ambassador and the mastermind behind the “alt-beach” wave look – said that he imagined the girls “were out all night dancing, sweating a lot, and put on a hat, fell asleep on the bus home and then took the hat off.”

In my case, I wasn’t having a ’90s-redux moment; I was walking a 50-kilometre trail to the Ciudad Perdida, or “Lost City.” I was sweating – a lot – and I was wearing a hiking hat, but it was about as hip as Stephen Harper lip-synching a Lady Gaga tune. (Can you imagine?) As for my sleeping arrangements, well, I slept on a hammock, shrouded in mosquito netting, hung in a tin-roofed open shelter. And when I took off that hat – a necessary accessory to avoid getting sunburned or infested with ticks – let’s just say that I had to embrace my inner Jungle Jane.

My sister, Jean, describes hiking as a “tabula rasa,” or reset moment, when the only thing that matters is putting one foot in front of the other. That’s exactly the meditative state I was in when, two days into the hike, we arrived at the foot of the 1,200 stone steps we’d be climbing to reach the Lost City. The pre-Incan site was built around AD 800 but abandoned four centuries later during the Spanish conquest. It was rediscovered by some local treasure hunters in the 1970s. The Colombian government eventually took control of the site, and gradual restoration began – despite occasional skirmishes with armed guerrillas. Unlike with Machu Picchu, which attracts more than a million tourists each year, only 8,500 or so adventurous types complete the trek annually.

Before I started to climb the steep column of mossy stone steps—which were shaded by a canopy of giant trees draped in bromeliads and dangling lianas – my guide, Carlos Pinero, cautioned me to be careful. #understatement.

READ MORE: A pilgrimage to Mount Kailash in Tibet

The first thought that entered my mind was that the Tairona Indians who once inhabited this place had tiny feet! More than half of my size 9.5 hiking boot was hanging off the edge of the worn-smooth stone. “Being in the moment” isn’t just a sentimental thought in instances like this: For the next 45 minutes, I could only focus on where I placed my feet and hands as I scrambled my way up the cliff. I couldn’t look behind me, and I couldn’t look ahead. I felt rivulets of sweat meandering their way down my back like raindrops on a windowpane. Each breath I took was deep (okay, slightly laboured), and there was this delicious burn happening at the backs of my thighs.

Then there was the endorphin rush that I experienced when the ground levelled before me and I reached the site. After catching my breath, I could take in the remarkable beauty and diversity of this remote mountainous setting. Before going on the hike, I read all kinds of stories that mentioned encounters with mosquitoes, ticks, deadly spiders, unspeakably horrifying bugs and – my favourite—venomous snakes. I’m sure they all exist, but I only saw hummingbirds, parakeets and iridescent – blue butterflies. It didn’t even rain – just a gentle mist that hung over the mountaintops in the early morning. And there was the constant jungle soundtrack – bird sounds that made me wish I had an avian Shazam app.

There isn’t much that is known about the Lost City, and all that remains are the 200 terraces that have been excavated, but Carlos – a masterful storyteller – soon had us imagining what life was like for the farmers who lived here under the watchful eye of the all-knowing shaman. In many respects, the local indígena encountered on the trail offer a glimpse into the lives of their Tairona ancestors. There are four tribes who live in the mountains: the Arhuaco, Kogi, Kankuamo and Wiwa. They are rather indifferent toward the interlopers on their land, but they occasionally stopped to chat with our guide. Their homes are circular thatched – roof huts, and they dress entirely in white. (No small sartorial feat when one lives in a muddy jungle.) Carlos told me that the tribes wear white because they believe that they are entrusted with protecting the earth and white reflects the purity of that responsibility.

READ MORE: Going beyond the Mayan ruins in Guatemala

The men wear their hair either long or in Jared Leto-like man buns, and their uniform – a cotton tunic and pants – is very Mao meets jungle. They also carry a straw satchel containing a supply of coca leaves and a hollowed-out gourd, called a poporo, filled with crushed seashells. They chew the leaves and the powder from the alkaline shells together, which produces a mild stimulant effect. The women, who are often barefoot, wear simple cotton dresses and multiple beaded necklaces. The children, more than the adults, tend to seek out encounters. They’re stoic, and it takes some effort to make them smile.

That night, after descending from the Lost City, we settled in for our final night on the trail. The searing humidity had receded, and there was enough of a chill at this elevation that I loosely wrapped a scarf around my head. I checked my mosquito net for holes, scanned the sheets for spiders – all good! – and then drifted off as I listened to the frog serenade.