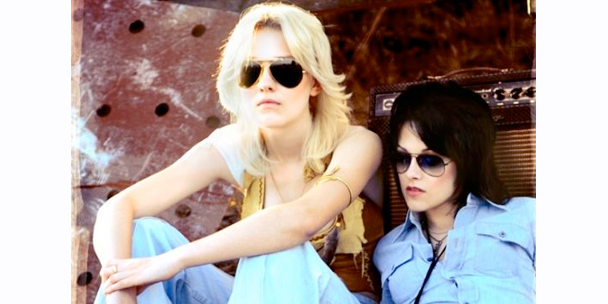 Cherie Currie’s trademark song was
Cherry Bomb, and that pretty much describes her impact on the rock scene in 1975. She was still a child when she took on the role of a sexy blonde singer in the first successful all-female hard rock band, The Runaways. The story, rife with drugs, fame and more drugs, is told in Floria Sigismondi’s stylish biopic under the same name. Dakota Fanning, most notably known for her sunshine-and-smiles roles was taped to play Currie; an apt role given to her from one child star to another. Kristen Stewart, the ever-elusive brunette plays her bandmate, rival and occasional lesbian lover, Joan Jett.

The girls were fifteen when their notorious manager Kim Fowley sent the band on the road alone, unsupervised. He ripped them off, encouraged drug use and turned a blind eye to their welfare. But The Runaways beat the odds to become seventies superstars. In her book
Neon Angel, Currie, now a chainsaw artist in southern California, says she was at odds with that life.

“I’m not going to say that that life didn’t appeal to me, I was excited to be a part of it”, Currie tells ELLECanada.com. “I had strong family ties and an ill father and I’d never been away from home before. I was really homesick, but it was definitely something I wanted to do; I grew up a lot on the road. But, beyond the hormones, the insecurities, and people trying to stop us, we did it. We actually did it. We had our own money for Tampax. Once that train left the station, we knew it was not going to end.”

Over two years of managerial abuse, drugs, infighting, and mounting stress, the Runaways finally hit the top of their game. Fanatical fans swarmed them at a show stop in Tokyo causing massive security problems, their pictures were on t-shirts and pop rag mags everywhere, their seminal self-titled album “The Runaways” was a surprise hit; they were famous.

More with Cherie on the next page …

Get the lates celebrity gossip here!

And suddenly, Currie just walked away. “I was done. We had been working so hard,” she laments. “I was tired of doing cocaine, LSD, tired of the touring and, no matter what I said, or what I did, I was always viewed as the one who was trying to get the good press.” Currie was considered the media darling of the group – secretly she was offered the cover of
Rolling Stone but turned it down because her elevated status reportedly drew the ire of her band mates. “If I took that cover, that would have been the end of the band,” says Currie.

After Currie’s departure, The Runways kept going for two more years. Bad management decisions and a revolving door of members tarnished the band’s integrity. Jett went on to form several successful groups including The Blackhearts, and Currie released a couple of flop records with her sister, Marie.

As for Currie’s relationship with Joan Jett today, they’re amicable and consider themselves friends (they worked together consulting on the film that Jett produced). “I was in a state of forgiveness, starting with myself,” she says.

Now that the film is out and garnering solid reviews, is a return to music in Currie’s future? Not quite. Even though she mentored Dakota Fanning on how to deliver her signature sound, stance and moves, she believes that part of her life is a distant, somewhat fond, memory. “I’m thrilled Dakota has taken my persona in this film. It’s a role that has blasted her from childhood to adulthood, just as it happened to me 35 years ago.”