The best CDs and music from the past year. 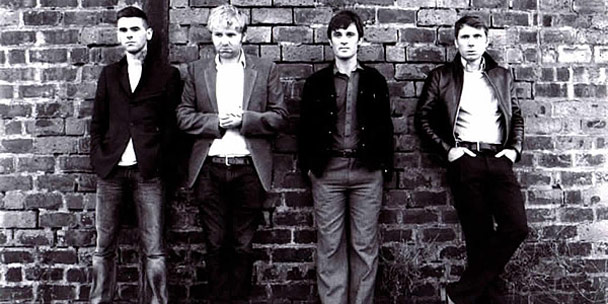 You’re going to start seeing a ton of Top Album lists over the next couple of weeks; some you think are right on the money and others you feel are the result of too much Nog and maybe a touch of glue sniffing. Clearly not having the ego to attack this grandiose assignment on my own, I went out and spoke to some bonifide music snobs and nerds. The mission for my bespectacled, skinny jean wearing comrades? A list of the best albums of 2009. It’s a big task to only choose 10 but between myself and a gaggle of American Apparel wearing music snobs, here are Ellecanada.com’s top 10 albums of 2009.

They made us wait long enough for their third album so it’s a pretty good thing it’s so damn good. They kind of lost me a bit with their 2005 studio album
You Could Have It So Much Better but won me back with this year’s release,
Tonight: Franz Ferdinand. You’ll probably see this one pop up on a lot of Top 10 lists this New Year, no surprise as the entire album is a danceable melange of pop and rock at its best. The boys from Ferdinand went back to what they know best; making quirky music with the ability to get even the staunchest of Prime Ministers to shake their pasty booties. “No You Girls” made it to the radio, and it’s a great song, but there are others on the album worthy of a bit of mainstream attention. Great album from beginning to end. Someone slip it in Stephen Harper’s stocking would ya?

There’s definitely something in the water in Brooklyn, New York. Some of the best music has come out of the cool New York borough as of late. Grizzly Bear tore a strip of the music scene this spring/summer with Veckatimest. Not their debut album by any means, but certainly their best; good enough to get the notice of none other than Radiohead. Opening for one of the biggest bands in the world in Toronto this past summer, Grizzly Bear cemented their relationship in the pseudo mainstream and will hopefully continue to thrive. The album itself is an exciting compilation of chamber-pop melodies, the entire record well-deserving of the hype.

This do-it-yourself duo (another Brooklyn creation) put out their second album this past January and it’s still playing on heavy rotation in my household. “Grand” brought real-life couple Matt Johnson (vocals/keyboards) and Kim Schifino (drums/vocals) a lot of local recognition, a VMA(“Lessons Learned”) and sold out shows across North America in 2009. I’m sure if you asked them, they would easily chalk this year up as one of their best. To see them live is a treat with Kim killing it on the drums and Matt infusing the crowd with his frenetic energy. Another reason to see the duo? Covers of Dead Prez, Europe and Brittney. Can’t wait to see what they come up with next.

Tegan and Sarah, Passion Pit and Lily Allen on the next page …

Much like Franz Ferdinand, the twins’ previous album before
Sainthood (The Con) left a lot to be desired. With the 2009 release of
Sainthood, the girls returned to their former glory with a triumphant 6th studio album, their best one to date. With their first ever attempt at writing songs together, Tegan and Sara explored a musical crevasse they were previously afraid to climb into. The kind of peculiar funny thing about this whole experiment was that none of the songs they wrote together made it on the album! To their credit however, you never know until you try and the process did in fact bring them plenty of solid tracks so it wasn’t entirely an experiment in futility. With a few electronic add-ons to what you’ve come to expect from the duo, Sainthood is a meaty compilation of solid song writing and a bravado rarely seen in today’s contemporary indie artists. To you, Quin sisters, I give two solid big toes up.

Maybe it’s a bit Christmas ballsy to include a band who has only had one studio album, on a yearend Top 10 list but what the hell; there’s no rules when it comes to good music is there? This Massachusetts band came out of the gates running in 2009 and you can’t punish them for putting it all out there right away. With such a likeable first album garnering them so much notice, I fear for their second attempt but optimistically wait with baited breath. The problem you see, is that record companies see dollar signs when an unknown artist hits the nail on the head first time out and then make them pump out a second one really quickly. The result? Coldplay’s
A Rush of Blood to The Head. Let’s just keep our fingers crossed that they don’t fall victim to that curse.

Manners is a synthy-pop album full of catchy hooks and sweet melodies complete with kids choirs and horns. What more could a girl want? Maybe 21-year old lead Michael Angelakos performing live for her only, but that’s the stuff of dreams. In the meantime, we have to settle with witnessing a young talent blossoming into something spectacular.

It’s official, Lily Allen is awesome. Ok, she’s not exactly going to get hard core Leonard Cohen fans listening to her on repeat, but she is what she is and I feel like she’s the last person in the world to apologize for it. On her second (and best) album to date, Allen sings simply and honestly about old boyfriends, her relationships with her both her Dad and her sister and the never ending quest for the elusive orgasm. All of this is over delightfully produced electronic, pop and jazz grooves provided by album producer Greg Kurstin. Danceable, funny and sweet; it’s no wonder this one ended up on our Top 10 Albums of 2009.

The Yeah Yeah Yeahs, Metric, K’Naan and Pheonix on the next page  …

This devilishly sassy album from one of our favourite rock heroines shows a different side of Karen O and the Yeah Yeah Yeahs this year. This side is thickly coated in pop grime and electronic goo way back from the 70’s and 80’s. What a sticky beautiful mess. Songs like “Zero” and “Heads Will Roll” show that the YYY’s have kicked up the cool factor and found a level of rock zen that will carry them well into the next decade and beyond, complete with silver capes and Karen O’s fabulous red lips.

Hot on the heels of their fellow countryman K’Naan, sits Metric in spot number 3. Anyone who has given Fantasies a solid listen can’t deny it: this is one amazing album. I’m not about to list all of the hip hit T.V shows songs from this album have appeared on, but there’s been enough exposure that the world has definitely taken notice of Metric. Emily Haines and James Shaw have an almost pathological work ethic that has brought them the kind of success that hard work and solid talent deserves. Best songs on the album go to: “Help I’m Alive”, “Gimme Sympathy”, “Blindness” and “Gold Guns Girls.” Well done Metric, you deserve a break but please, not for too long!

First question: Have you listened to this album yet? Second question: If you answered no to question number one, what’s wrong with you? Undeniably one of the best Canadian albums of 2009 (even though he got passed over for the Polaris Prize to punk outfit F**ed Up) the Somali born rapper is no doubt on his way to international stardom. A re-mixed version of the single “Wavin’ Flag” has recently become the official song for the Africa leg of the 2010 FIFA World Cup trophy and he just completed a tour opening up for Lenny Kravitz. At this point he is definitely a musician’s musician with heavy collaborations on
Troubadour with Chubb Rock, Adam Levine (Maroon 5), Charlie Tuna (Jurassic 5), Kirk Hammet (Metallica) and Nas. I’ve always felt that the measure of an artist’s talent (early in their career) is easily recognized by the company they keep in the recording studio. There’s no doubt his comrades see the talent, now it’s just up to the rest of the world. If you don’t have it yet, bring K’Naan’s
Troubadour with you into 2010. It’ll be a great way to start your New Year.

Our number one album for 2009 goes to France based band, Phoenix and their incredible fourth album Wolfgang Amadeus Phoenix. I think this year probably surprised them more than anyone. It’s pretty hard for a European based band to break HUGE into the North American market, especially one from France. It’s difficult to know why; it’s just the way it is. Not only has Thomas Mars (vocals) Deck D’Arcy (bass), Laurent Brancowitz (guitar) and Christian Mazzalai (guitar) made one of the most listenable albums of 2009, they’ve been nominated for a Grammy for Best Alternative Artist. Ok, while we’re on the topic of Grammy’s, can we maybe come up with a better name for this category than ‘Alternative Artist’? It sounds like they live on Salt Spring Island and heal retired chakras while making homemade soap out of goat poop. Regardless, let’s hope they take away the coveted music prize, even though it means more to us than it does to them. Apparently when their manager told them of their nomination, the boys didn’t really think anything of it. Being from France, they’ve never really known of the importance of a Grammy across the pond. “Listomania”, “Countdown”, “Girlfriend” well, pretty much all of the songs on the album rock so I can’t really pinpoint the strongest ones.
Wolfgang Amadeus Phoenix is their 4th studio album and this time, they definitely got it right. Ellecanada.com is definitely looking forward to more amazing music from these French hotties.

Give me your take on this year’s best albums and e-mail me at
[email protected]! In the meantime, have an amazing New Year and continue to go forth and make amazing music.