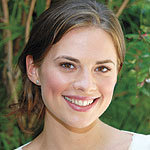 Sometimes, it’s difficult to understand why certain films are selected as galas at the Toronto International Film Festival – The Jane Austen Book Club? Really? – but Saul Dibb’s The Duchess is a no-brainer. It’s an extravagantly produced period piece with the sort of starry, fine-boned cast that looks good on a red carpet: Keira Knightley, Ralph Fiennes…not to mention Hayley Atwell.

In the film, the 26-year-old actress plays the mistress in a famous 18th-century love triangle. “It’s a story about what people will do for their children,” says Atwell. “I think it pinpoints how, for a woman fighting for her independence and custody of her children, becoming a style icon is a way of finding a voice.”

Atwell is referring to the fact that Georgiana Cavendish (Knightley), the titular Duchess of Devonshire, was as renowned for her fashion sense and outspoken political views as she was reviled for her scandalous personal life. It was well known at the time that Georgiana’s husband, the Duke of Devonshire (Fiennes), was having an affair with her best friend, Lady Elizabeth Foster (Atwell).

“Georgiana was similar to Princess Diana in terms of her birthing and the nature of her celebrity,” says Atwell, adding that the film doesn’t belabour the parallel. Nor, she adds, does it stress the period detail, explaining that the elaborate costumes and hairstyles are subordinate to the human drama. And that’s how she likes it. While some actresses relish the opportunity to play dress-up, Atwell recalls being less than amused. “I found it irritating,” she says. “It’s fun to see your cast members dressed up and laugh with them. But it loses its interest very quickly.”

Get the latest buzz from TIFF 2008 here!