ELLECanada.com's Carole Park dishes on the events, the swag and celebrity sightings during this year's Film Festival. 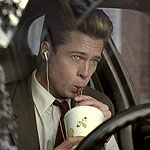 Approximately 1:45pm a swarm of photographers brought attention to Richard Branson stepping out of Lobby after the ultra-exclusive Virgin UNITE luncheon. Branson flashed a smile of his much too bright whitened teeth the crowd of passers by before stepping into a black SUV.

Around 8:30pm at the Park Hyatt’s rooftop lounge, Harvey Weinstien stops by to briefly speak to Ralph Fiennes. Fiennes sat at a table near a back corner whilst having drinks with a group of people.

Spotted in the hall off of the lobby at the Park Hyatt at 10pm are two fans getting autographs and photos taken with Brothers Bloom co-stars, Rachel Weisz and Mark Ruffalo.

Burn After Reading
It was just last year when I sat in sheer horror at a late night screening of Joel and Ethan Coen’s No Country For Old Men. Javier Bardem’s hair cut and character haunted my nightmares for a week and quickened my pace while walking alone at night. In deep contrast to the western-horror, the Coen brothers return to TIFF with the brilliant comedy thriller, Burn After Reading.

Burn After Reading is a comedy disguised as a Washington spy thriller, where the spy and thriller part are driven by the trivial pursuits through the intertwining of unlikely characters. The Coen brothers seem to have this knack for odd hairstyles, as can-do fitness employee, Chad (Brad Pitt), has a piled high hair-do that is almost a pomp.

Holt Renfrew’s TIFF party
For the launch John Varvato’s new line for Converse, GQ hosted the stylish event at Holt Renfrew. The lower-level of the Bloor Street location was transformed into a massive dinner to emulate the now closed Florent in New York. The latest Converse ad campaign was shot by Ryan McGinley at the now defunct diner and a short film was premiered prior to MGMT’s intimate performance. Miniature meat loafs and pies circulated around the ice cream sundae bar with tables full of candy as far as the eye could see. Guests got to pick out silk screened shirts and also piled into an old instant black and white photo booth to bring home a strip of photos to remember the evening by. Among those who posed for the flashbulbs at the party were: Jeremy Piven, Gael Garcia Bernal, Sofia Bush, Grace Park, and Dean and Dan Caten of DSquared.

Day three sightings on the next page!Day 3
Sightings:

Writer/director Ramin Bahrani was seen with Souleymane Sy Savane, Red West and the rest of the cast walking from AMC theatres at Yonge and Dundas to the Grand hotel for the after-part of the North American premiere of Goodbye Solo. Fresh off their win from the FIPRESCI International Critics Prize at the Venice Film Festival the cast certainly had something to celebrate.

It Might Get Loud
The world of rock and roll often seems nothing more than an over indulgent fantasy of anyone who just wants to play and party all the time. Davis Guggenheim’s documentary, It Might Get Loud, looks beyond the surface to examine the role of the guitar player. The Edge (U2), Jimmy Page (Led Zeppelin), and Jack White (The White Stripes come together to discuss each of their creative process, style of playing, to teach one another their tricks, and play.

Although the narrative and organization of the film at times loses sight to muddle the clarity of what the documentary may be trying to fully convey, it is interesting to see and hear these legendary guitar players discuss their backgrounds, influences, and how their distinct styles came to be. One thing each of the musicians clearly communicated was their love of what they do, and if anyone loved what they did for a living as much as the three of them loved guitar playing, anyone would be at the top of their field as well. The passion of their craft is what motivates each of them, to seek challenges to further innovation of their careers.

The selection of Page, The Edge, and White laid out three generations, but each demonstrated that new things can be brought about in time while keeping traditions alive.

Kevin Smith tries his best Judd Apatow impression with the film. Jokes are filthy as dirt, unnecessary swearing litters the dialogue, while boobs and butts are shown wherever he might be able to get away with it. At times, the dialogue does become a bit too much like Juno, where the banter just tries too hard to be witty and seems unrealistic that a foul mouthed character is spitting these words out. Smith’s attempt to take shallow humor and disguise a heartwarming tale, which Apatow’s films are known for, seems unable to make the full transition effectively.

Raunchy comedy enthusiasts of Smith will not be disappointed as he seems to have recovered from the last few flops. But buyer beware, although familiar Apatow cast members including Craig Robertson and Justin Long make appearances in the film, it falls short of what those appreciative of warm story lines disguised in Apatow comedies.

Valentino: The Last Emperor
Judging from the line outside the Winter Garden Theatre, fashionistas fought to get tickets for the North American premiere of Valentino: The Last Emperor the same way they may elbow their way through a sample sale. The well healed crowd was not disappointed as Valentino Garavani, his partner Giancarlo Giammetti, and director Matt Tyrnauer were present at the screening of the film.

The film chronicles the last few years of Valentino’s career, just prior to his 45th anniversary as a designer, which was filled with rumors and speculation of retirement. The documentary depicts the detail that goes into the making of true fashion- haute couture, where garments are hand made from start to finish with as many as six women working on a dress at any given moment. The less than glamourous side of business also had a role, where tensions ran high between pushing forward to make the company profitable for it’s owners while meeting the demands of creative freedom necessary for a designer to create. However, central to the film was Valentino and Giammetti’s relationship and partners at work in life, where everything from discussing Valentino being slightly too tanned to the care of their five pugs brought focus to Valentino the person, not just Valentino the designer.

The glowing reception from the Toronto audience, which was topped off with a standing ovation that lasted the full duration of the film’s credits. Valentino himself stated that the audience and atmosphere made the film more enjoyable than the other times he’s seen it and also led him to announce to the crowd that the next step in his career will be costume design for operas and ballets.

Day five sightings on the next page!Day 5:

Mongrel Media’s party. The event, taking place at the spacious Boiler House, was packed with industry to celebrate Mongrel Media’s 16 films at the film
festival, which included: Heaven on Earth, Il Dive, I’ve Loved You So
Long, Nurse. FIghter. Boy, O’Horten, Rachel Getting Married, and
Tulpan -just to name a few.

Performances by Juno-nominated Ed Hanley, Flamenco guitarist Jorge Miguel and vocal percussionists Sick Sound Syndrome all added to the energy and
vibe of the party, while at midnight, the house was still rocking with K-OS
taking over the DJ booth until the wee hours of the morning.

What to look out for at TIFF today: Celebutante Paris Hilton is in town for the screening of Paris, Not France. The documentary about Hilton, directed
about Adria Petty, aims to examine the illusion that is Paris “The Heiress” and her real-life persona. Wonder if there really is a difference?

An Exquisite Night of Style

Toronto It-spot Lobby played TIFF host this week with VIP celebrity parties, most notable last night’s “An Exquisite Night of Style.” The vodka cocktails (supplied by Wyborowa Exquisite vodka) were a-plenty while guests were treated to a fashion show hosted by renowned shoe designer, Ron White. Gorgeous male models strutted the pseudo-catwalk in Canadian creations from London Fog, Police eyewear and bespoke shirts by Marlon Durrant. For those feeling lucky, a pro-poker room was situated on the lower-level of Lobby where you could play your hand at gambling.

Day eight sightings on the next page!Day 8: Gifting lounges

The Toronto International Film Festival is no “Swagdance” but within the last few years, the increasingly high profile of TIFF has led to gifting suites and lounges invading hotels and restaurants for a week and a half.

Over at the Intercontinental Hotel on Bloor, the Tastemaker’s Lounge returned for a fourth year to gift celebs. With an “Oh, Canada” theme this year, the Bay and Joe Fresh were amongst brands featured. Joe Fresh not only gifted the grown-ups who came by, but also sent items from their organic kids line to celebs including Brad Pitt, with the hopes that Maddox or Shiloh will look as cute as they are eco-conscious. Danny Glover also dropped by and scooped up a few items from Strellerson, known for their accessories.. Don’t be surprised to see him with one of their belts or silk ties. Julianne Moore and Tim Robbins also swung over to scope out the swag, while Jennifer Aniston was sent a Puma bag stuffed with goodies from Burts Bees, AG Hair, and snacks from Sam and Ike.

Snagging swag is a massive perk that comes with the less-than-glamorous schedule of early morning screenings and late-night parties of the film festival. Here’s a tally of what I was able to snag despite the fact that I have yet to make the A-list:

Consumed items, because those free snacks serve as great meal replacements in a pinch:

My new tote bag collection:
For the Love of FIlm bag provided by TIFF, nylon Parassuco knapsack, Get Chucked cotton canvas bag and nylon cameo messenger bag both from GQ/John Varvatos/Holt Renfrew party -yes, they gifted a bag inside another bag.

Beauty products, because beauty sleep alone won’t help with recovery from the past ten days:

Food that has yet to be consumed and other miscellaneous items: