The low-down on where to spot (or even rub elbows with!) the stars at this year's film festival. 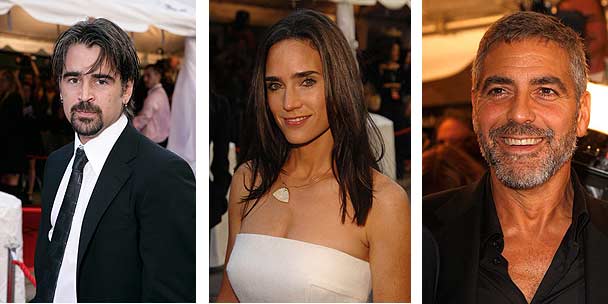 Once a year starlets and industry leave Hollywood and Manhattan and bring that energy and excitement with them to Toronto for the film festival. With celebs and directors lurking on our streets this time of year, here are some of the best spots and events where you may just end up rubbing elbows with Megan Fox.

Paul Haggis, Olivia Wilde, and Jane McLean are a few stars expected to stop by the IT Lounge, housed in the hotel, which will be gifting celebs with outerwear from Brooks and Fila the necessary active wear to out run the paparazzi. The hotel is also hosting a slew of parties throughout the fest including the 10th Anniversary Celebration in support of Artists for Peace and Justice and the exclusive InStyle and Hollywood Foreign Press party.

The Park Hyatt’s Roof Lounge is one of the best spots to watch the stars all while grabbing a drink or two. Sightings of Angelina Jolie, Brad Pitt, Mark Ruffalo, Rachel Weiss, Ralph Finnes and Harvey Weinstein in past years pretty much ensure that you’ll run into a celeb or two before reaching the elevators.

The hotel and it’s private screening room is a magnet for top directors and industry during the festival including the Coen Brothers last year. If you can finagle a reservation at The Hazelton’s restaurant, One, be sure to get a patio seat for a prime people watching spot in the heart of Yorkville.

The nondescript private club on King West is difficult to access without a membership, but it’s this privacy that attracts A-listers to get away from the busy streets. If you’re lucky enough to have a membership or get in as a hanger on, the battle is half won, so sit back and have a round and enjoy the view of the rooftop patio or just soaking it up from where you may be sitting.

Stars like Drew Barrymore have frequented the West Queen West area when in Toronto in the past, so The Drake’s Sky Yard is a hotspot for those looking to get away from areas of the city more commonly referred to as “festival central.” With a cooler vibe, it makes it the ideal spot to unwind at.

More places you could spot a celeb on the next page …

As the mecca of fashion in Canada, Holt Renfrew is the place to go for any celeb looking for a last minute outfit for a press junket or the party du jour. With their private shopping suites and one of the best selection of designer duds under one roof, it might be worth to just charge a killer outfit on the credit card for that fabulous festival night out.

This particular hotel is a bit out of the way, doesn’t have a fantastic restaurant or bar, but it’s where a lot of the wheeling and dealings of the festival take place. All industry goes in and out of this hotel at one point or another during the festival, so if you’re hoping to meet a producer or director to pass your script off to, hovering about here may just be your best bet.

With celebrity interviews taking place within the walls of the InterContinental Hotel, it’s likely you may see your favourite leading man or lady wearing an extra large pair of sunnies while entering or exiting. Also housed in the hotel is the Tastemakers Lounge, offering hair and makeup touch-ups courtesy of JoeFresh and Chiggy’s Touch for the starlets who may drop by on their way to a junket.

Starbuck (on Bloor St. West at Avenue and on Yorkville)

Celebrity jet-setters still need a constant in their busy schedules and there’s nothing like the consistency of Starbucks coffee. Late night parties will have every actor and actress grabbing a venti on their way to an early morning press conference. The proximity to the hotels celebs are staying definitely increase your chances of possibly spilling your coffee from bumping into Michael Cera.

So you may think celebrities may stay within an insular bubble during the festival, but it’s not all fun and games for the people here promoting their films. Although some stars are more curious then others, more then a few will take it to the streets outside the perimeter of Yorkville or Roy Thompson Hall. You may never know what dive bar you might spot someone cutting loose at, and be sure to do your research as young up-and-comers could walk right into you and go undetected.

Must-see films at this year’s festival