The top 5 reasons to take a selfie

Worried about seeming like a self-absorbed narcissist? Fear no more. 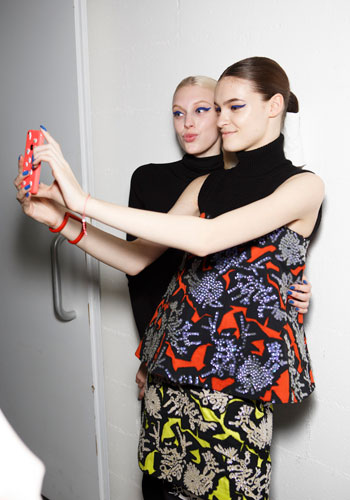 We know, people love to hate on selfie-takers. But the truth is that almost all of us are guilty of taking the occasional self-portrait—a whopping 76% of Canadians aged 18-34 have copped to it according to a 2013 study by Virgin Mobile. Given the stats, we think it’s high time for a shift in the selfie narrative. Here are our five favourite excuses for self-snapping:

GALLERY: Celebrity selfies: The good and the bad

1. You need to see a doctor
Problem skin-sufferers, rejoice: You’ll no longer have to wait months to see a dermatologist, thanks to San Diego doctor David Lortscher’s company PocketDerm. Using the PocketDerm app, patients can receive diagnoses and prescriptions from board-certified dermatologists simply by sending in photos of their skin—no in-person consultation necessary.

2. You’re trying to score a modeling gig
Getting discovered on YouTube is officially passé, according to the man who introduced the world to daisy-scented perfume and Kendall Jenner’s nipples. Designer Marc Jacobs recently turned to Twitter and Instagram to find the face of his next campaign, asking wannabe models to tag their selfies “#CastMeMarc”. Within hours of the announcement, thousands of hopefuls with concave backs and insouciant faces submitted their selfies for consideration. Given the success of the contest, we’re willing to bet other designers will soon begin scanning Instagram in search of their next muse… Better start practicing those poses in the bathroom mirror

HOW TO climb the social media ladder

More reasons to take selfies on the next page…

3. You’re repping university students
Two American universities have recently banned graduating students from taking selfies while walking across the stage to accept their degrees. Rhode Island’s Bryant University was the first to initiate the policy in April 2014 and the University of Florida was quick to do the same. As it stands, graduates in Canada can still exercise their right to the selfie, but we think it won’t be long until our schools adopt the same rules. In the meantime, show your support for our selfie-loving sisters south of the border: #Students4selfies, unite.

TIPS: 10 steps to the perfect selfie

4. You’re saving the world
Selfie posters “owe humanity a dollar," according to the two Brigham Young University students behind the Selfie Police project. You can “police” yourself and your friends by tagging selfies with #SelfiePolice, thereby charging the offending party $1 for posting the photo. To pay your fine, go to The Selfie Police. Every dollar raised goes directly to charity.

ETIQUETTE: Is it really OK to unfriend someone?

5. You’re rocking Tom Ford
OK, so maybe vanity does play a vital role in selfie culture. We’re OK with that—take that selfie and post it with pride, girl. But beware: repeated offenses will cost you a few followers.

READ MORE:
Social Media: Why I’m just not that into you
Are webcams the future of relationships?
The power of the introvert