When the love train skips their station, savvy singles turn to the experts to make them a perfect match. 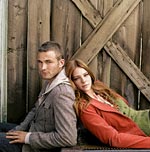 At midnight, Katie spots her prey by the bar at the Devil’s Martini in Toronto. She coasts over to the pretty brunette in the pink silk dress and says, “I have a bet going; come with me.” She returns to her table with her quarry and playfully nudges her friend Tom. “See, I told you it’s easy to pick up women.”

A week earlier, Tom had called Ice Breakers for a Wing Girl. We’ve all heard of a “wingman,” a guy who helps his buddy score by building him up to a girl (“He jumped in front of a bus to save a puppy”), swooping in when things get awkward or distracting her friend. That’s what a Wing Girl does. “A Wing Girl makes a man look unattainable and therefore more attractive to other women,” says Marni Kinrys, the 24-year-old Torontonian co-founder of Ice Breakers (www.thealliednetwork.com), Ontario’s largest dating service. “But now it’s the hip, chic thing to do.”

More dating tips on the next page!

In 1992, after a divorce and “countless dates from hell,” 36-year-old writer Gabrielle Bauer joined The Allied Network, which caters to 25- to 65-year-old professionals and offers a 90 percent success rate. Following her one-hour interview, she was set up with a butcher. He was handsome and nice, but there’s only so much about knives a girl wants to know. Bachelor number two was “in interior design,” but he was more a drywaller than a style guru. Bauer was starting to question her $1,700 investment when, on date number nine, she met college professor Drew. They are now married with two kids. “Some like the idea of things happening through destiny,” says Bauer. “But sometimes you have to be an agent in your own destiny.”

“Times have changed,” says Shaun Waterman of LifeMates (www.lifematescanada.com), which boasts 30,000 active members in Ontario, B.C., Alberta and Manitoba. “Twenty years ago, people knew their neighbours, met in churches, cruised bars for their soulmate. Not anymore.” Matchmakers are riding the wave of singles no longer looking for that immediate — and misleading — sexual spark. “You can go to a party and point out a dozen attractive people,” says Waterman. “But how many will be compatible with you? Nobody has ever said to us ‘I want to meet your ugly members.’ They all want attractive. But if the compatibility is there, the physical attraction is the easy part.”

Tired of the bar scene, 21-year-old Trisha Lawrence from Edmonton joined LifeMates in 2001. After an hour-long interview, she was ready to start dating. Guy number one wasn’t memorable — save for his skin-tight cargo pants. Guy number two refused to make eye contact, open her door or even talk, for that matter. On date number three, she met 28-year-old Jason Kasawski. “Before LifeMates, I’d go out with guys only to find out by, like, the fourth date that we weren’t compatible,” says Trisha. “But with Jason, it was like starting out on the fourth date: you’re meeting someone you’re already compatible with; you just have to figure out if you’re attracted to each other.” They definitely were. Jason and Trisha married a year and a half later and had their first baby this May.

Like Trisha, many singles turn to matchmakers because they don’t have time to waste on the wrong person. They prefer the personal touch and have lost patience with the vagaries of online dating. (Did you really want to date the pictured hunk’s pot-bellied father?) “My last blind date came up to my nose, was 30 pounds overweight and drank one bottle of wine at lunch and one at dinner,” recalls 47-year-old divorcee Carla from Vancouver. Fifty blind dates, two proposals and one boozy guy later, Carla turned to Hearts (www.heartscana
da.com), a 20-year-old company in Toronto and Vancouver whose services include regular matchmaking for $1,000 and private searches for $10,000 and up. (This price is based on the amount and location of advertising, which tends to be very
expensive.) Carla opted for a private search, and after a two-hour interview in her home, Hearts posted ads in two newspapers, seeking “an intelligent gentleman…who’s fun and romantic, possesses a good sense of humour and enjoys the finer things in life.” Within days, the service received eight bites. Hearts personally interviews all the respondents before presenting them to their client. “If these men don’t have the qualities I’m looking for, Hearts won’t waste my time with them,” says Carla. “That $10,000 is an investment in my future — I’m confident I’ll find my soulmate.” Since then, Carla has met a couple of maybes but is still waiting for that special guy.

For those strapped for love and cash, Toronto’s Single in the City (www.singleinthecity.ca) might be a better fit. “It’s pay as you play,” says president Laura Bilotta. Fill out a profile and send pictures, and if they find you a match, you pay $50. With over 12,000 members, the service boasts a 70 percent success rate. As for that remaining 30 percent, don’t fret. If you don’t fancy your date, no need for that awkward “It’s not you, it’s me” speech. Included in the $50 is a breakup-by-proxy service — Bilotta will do the dirty work for you.