Test Your Celebrity IQ: How well do you know Brad Pitt?

Are you that know-it-all who is always correcting your family and friends on celebrity facts, rumours and whereabouts? Think you're top drawer when it comes to pop idol trivia? Prove it by taking our celebrity quiz challenge. 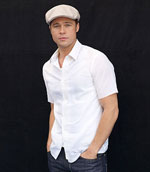 2. Before becoming the hunk ladies drool over and fellas envy on the silver screen, Brad Pitt supported himself by:
A) Working as the bar back at an of-the-moment club in LA
B) Driving strippers in limos
C) dressing up as a large chicken while working at el Pollo Loco
D) b and c

4. How did Brad meet his first wife Jennifer Aniston?
A) A blind date set up by their agents
B) On set of Jennifer’s movie
C) Through mutual friends
D) at an MTV movie awards after party

8. It has recently been rumoured that Brad Pitt:
A) Has gotten a tattoo
B) Is buying a mansion in Spain
C) is mentally unstable
D) none of the above

9. For which film did Brad win the MTV Movie Award ‘Most Desirable Male’?
A) Legends of the Fall
B) Interview With The Vampire
C) Mr. & Mrs. Smith
D) Twelve Monkeys

10. Which of these songs mentions Brad Pitt’s name?
A) Pink’s “There You Go”
B) Hillary Duff’s “Stranger”
C) Geri Halliwell’s “Desire”
D) Shania Twain’s “That Don’t Impress Me Much”

11. Which charity has Brad been involved with?
A) Make Poverty History
B) Wyclef Jean’s Clean Streets
C) Sole of Africa
D) all of the above

13. Brad and Angelina are both multi-millionaires. But, who brings home more money in the Jolie-Pitt family?
A) Angelina Jolie
B) Brad Pitt

14. Brad describes parenting in an interview with the BBC as:
A) “The most fun I’ve ever had and also the biggest pain in the ass I’ve ever experienced.”
B) “Hectic … all the time. My life is definitely different now.”
C) “I’m still learning, but I think I’m getting the hang of it.”
D) “Not too sure, Angelina does most of the work.”

15. What names did Brad reportedly refuse to name the babies on the way?
A) Moxie/Kafka
B) Pollux/Castor
C) Doremi/Yamma
D) Assasi/Cresenthia

Bonus Question:
16. What are the names of all four Jolie-Pitt children?
A) Pax, Zahara, Shiloh and Maddox
B) Maddox, Zahara, Tao and Shiloh
C) Zamari, Maddox, Pax and Shiloh
D) Zaylie, Daxen, Maddox and Shiloh

Answers:
1. A Brad has the same first name as his father, William, who goes by Bill.

2. D Brad dropped out of college, two credits shy of graduating, and moved to California where he had an array of jobs before he had his first big break in the movie Thelma & Louise.

3. A As a Hollywood Adonis, Brad had his choice of women. He briefly dated Robin Givens in ’89 (much to the chagrin of her ex-husband Mike Tyson) then got serious with Juliette Lewis from ’90-93. After a brief stint in ’94 with Thandie Newton he then dated Gwyneth Paltrow who he met on the set of Se7en in ‘95, got engaged by December of ’96 and mutually agreed to split in June ’97. Ironically, in 2000 he ended up marrying his girlfriend of the past two and a half years, Jennifer Aniston, and divorcing her five short years later. It was rumoured that Brad was cheating on Jennifer with Angelina Jolie while filming Mr. & Mrs. Smith in ’05. This is all before settling down in love (and babies) with Angelina Jolie for the last 3 years.

4. A Brand and Jennifer went for dinner on their first date in 1998 and kept their relationship hush hush for months after.

5. A Brad and Jennifer’s extravagant wedding took place in Malibu and featured about 200 guests, 50,000 flowers, four bands, a gospel choir and fireworks.

6. B Brad and Angelina adopted babies Maddox (born August 5th 2001 in Cambodia), then Pax (born November 29th 2003 in Vietnam), then Zahara (born January 8th 2005 in Ethiopia), then Angelina got pregnant with baby Shiloh (born May 27th 2006) and is now expecting again, with the twins due sometime this August.

7. B In 2006, when George Clooney was named Sexiest Man Alive, Brad took out two full page ads in Variety and The Hollywood Reporter featuring an old school picture of George (curly mullet and all) and his ‘sincerest’ congrats. George Clooney retaliated by teasing Brad on David Letterman for being named Sexiest Man Alive twice. His gag included pictures of Brad in white tapered pants and a snazzy beret.

8. A Rumours have been swirling that Brad Pitt’s newest tattoo on his lower back is inspired by a map of the levees in New Orleans, which were destroyed in 2005 by Hurricane Katrina.

9. B Brad took home his first Most Desirable Male award in 1995. However, he wouldn’t be Brad if he didn’t win it twice. The following year he took home the title again for his sexy performance in Se7en.

10. D Shania dismisses Brad’s stellar looks and adorable personality by singing, “So you’re Brad Pitt, that don’t impress me much.” All I have to say is yeah right.

11. D Brad is not one of these celebs who only donates large sums of cash, he donates his time as well. He has been known to use his vacation time to go and support Sole of Africa, a charity dedicated to removing landmines and world hunger, or to head to New Orleans and check in on his project Make It Right, which helps survivors of Hurricane Katrina.

12. B Recent Oscar winner George Clooney takes a jab at Brad (yet again) this past April when he told Access Hollywood, “That’s what I enjoy doing with Brad is gloating. Because things aren’t going well for him.”

13. B In 2007 Brad raked in approximately $35 million for his movies, including such hits as Oceans Thirteen. In that same year, Angelina brought in about $20 million from her movies and endorsements. Combined, these two aren’t doing so badly.

14. A Brad also added in his interview with the BBC about being a parent, “I love it and can’t recommend it any more highly – although sleep is non-existent. It makes me much more efficient because when I work I really have to focus, I know I’ve less time to get things done. Actually I’m quite pleased by it.”

15. B The rumour has it that Brad would not want his child to be named Pollux because it is way too close to the British curse word bollocks. Good call Brad.

16. A The Jolie-Pitt clan Maddox, 6, Pax, 4, Zahara, 3, and Shiloh, recently turned 2, all have really interesting names. Maddox is a Celtic name meaning beneficent, Pax is Latin for peace, Zahara means flower in Swahili and to shine in Hebrew, and lastly Shiloh means peaceful one.

How did you score?

Mostly A’s: You may just be the next Perez Hilton. You know your stuff, especially when it comes to heart-throb Mr. Brad Pitt.

Mostly B’s: You read celeb headlines every once and awhile, but you’re not quite a Brad Pitt buff.

Head to the nearest newsstand and grab yourself the essentials: a copy of US, People and Hello. You need to bone up on your Brad Pitt trivia.

Mostly D’s: You may not be a Brad Pitt trivia genius, but you’re on the right track. After some quality time watching Extra and E! you will be able to inform anyone on Brad Pitt’s past and present.