And it's a woman CEO leading the charge. 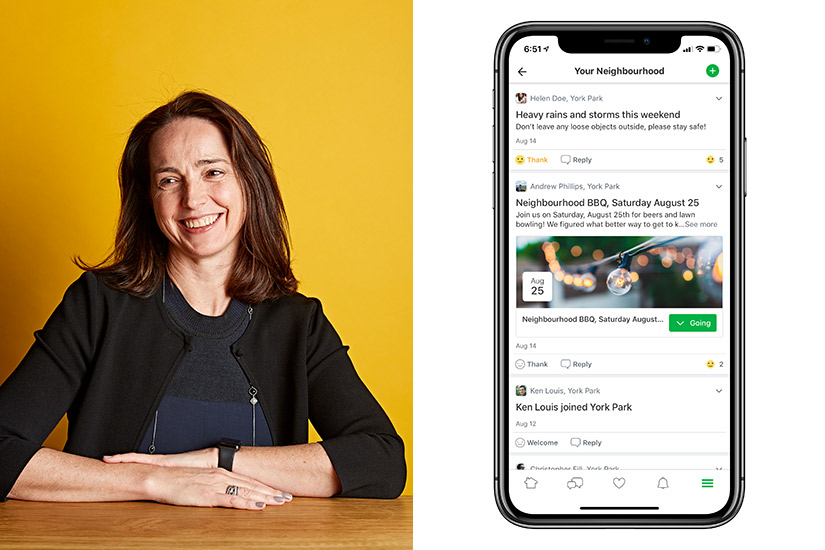 Have you ever needed to quickly find a local plumber for some unexpected, urgent repairs? Or wondered what the construction down your street was about? Or even needed to borrow that stereotypical cup of sugar? Well, now there’s an app for that.

Nextdoor, the San Fransisco-based neighbourhood social networking app, officially launched in Canada this week. The platform, which is available in 11 countries, allows users to connect with their neighbours by placing them in a private, area-specific group. Users are verified electronically, or by a postcard with a unique code if further verification is needed. Once in, people can stay up-to-date about what’s happening locally, find a last-minute dog walker or even just grab a coffee with someone new.

“Everything and anything that you want to get done locally, we want to make sure it can happen for you on Nextdoor,” CEO Sarah Friar tells us. “We all know that in really good times, it’s great to know your neighbours, to just be able to say hello. But frankly, when things get tough, it’s often your neighbours who save you.”

Despite the fact that it’s 2019, women leaders are still are a rarity – in and out of Silicon Valley. A recent study by Silicon Valley Bank, for example, found that half of tech and healthcare startups have no women on their leadership teams. This is a reality Friar knows all too well. She says Nextdoor’s board is at gender parity, and other key executive roles (like heads of product and revenue) are held by women. “If you don’t look like your customers, I fundamentally believe you can’t build what they need,” Friar says. “It’s important to me that we’re conscious of the biases we might be bringing.”

That extends to users as well. The app has come under some controversy, with reports of racial profiling occurring on its pages. Friar says the safety of women and people of colour who use Nextdoor is important to her and her team. They recently launched a “Kindness Reminder,” which will prompt users with a warning that certain content may be flagged if posted. The goal is to get users to slow down and think about what they’re posting instead of giving into an instant reaction.

Friar knows that asking people to slow down on a tech platform – which are geared to grow quickly – is counterintuitive. But she counts it as just one of the ways Nextdoor is different.

The other? “Our purpose is very much to get people into the offline world,” she says. She considers Nextdoor an “anti-social network,” hoping that people don’t spend too much time on the app. Instead, Friar hopes people are able to take their on-screen convos and transform them into IRL friendships. Signs indicate that may already be the case.

“We just had our first engagement! It was an Australian couple who met at a [Nextdoor] event,” Friar says with excitement. “So, lean in. Like anything in life, you’re going to get out of [the app] what you put into it. Don’t be afraid to make those first couple of posts and build a community.”