Designer Hayley Elsaesser, artist Maria Qamar and transgender activist Stef Sanjati reflect on their latest creations, which they designed on the Microsoft Surface. Proceeds from the projects benefit the charitable organization Rainbow Railroad, which supports people in international LGBTQ communities who are fleeing persecution and helps them get to safety in Canada. 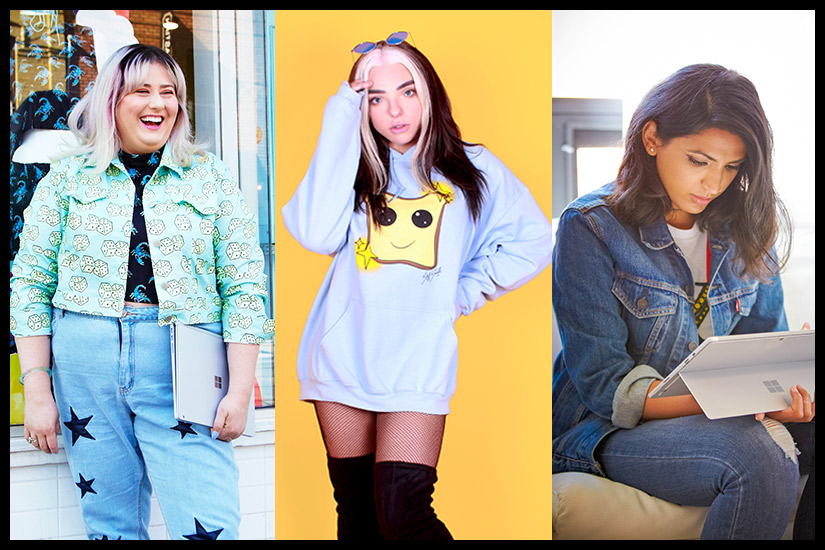 Hayley Elsaesser is making fashion more inclusive, one design at a time.

Go ahead: Try not to smile when you see one of Hayley Elsaesser’s creations. The Toronto-based fashion designer’s colourful, joyful and size-inclusive line has earned her scores of fans in celebrity and fashion circles alike. Her new project with Microsoft is equally feel-good. Elsaesser designed a mini-backpack with a pattern that riffs off her signature mouth print using her Microsoft Surface and its Surface Pen. Proceeds from the collab benefit the charitable organization Rainbow Railroad, which supports people in international LGBTQ communities who are fleeing persecution and helps them get to safety in Canada.

Elsaesser created the design on her “Mouthy for a Reason” mini-backpack ($75 at hayleyelsaesser.com) using the Surface Pen—which mimics the feel of drawing on paper—on the Microsoft Surface Go ($529 at microsoftstore.ca).

On her vision for the backpack “It represents individuality and pride, embracing who you are. I made a mini-backpack because I wanted it to be something that would work for everybody. It’s an accessory that people of all different shapes and sizes can wear and feel cute wearing. The print is a more stylized version of my iconic mouth print. I wanted to have a hand-drawn aspect to it. I drew directly onto the screen of the Surface in Adobe Illustrator in Illustrator and then compiled it into a repeated print.”

On the importance of inclusivity “I was super shy growing up. I’m from Cambridge, Ont., this small little city, and I never fit in. I’ve always been kind of a weirdo—I had Cruella de Vil hair in high school!—and fashion was how I expressed myself. When I started my label, I was really conscious of that feeling of being an outsider. I like to use fashion as a way to bring people together and make them feel good about themselves. The fashion industry is so exclusive.”

On finding your people “It’s all about having a community that makes you feel supported. If you live in a small town, there might not be anybody like you, but with the Internet and social media now there’s a global community at your disposal. Don’t be afraid to put yourself out there because, I guarantee you, there are people who feel the same way. Also, embrace who you are. It’s so clichéd, but you’re the only you in the world—celebrate that fact!”

How Hatecopy is challenging stereotypes one drawing at a time

Fed up with the bro culture of her nine-to-five advertising life, Maria Qamar launched the Instagram account Hatecopy—an illustrated pop-art commentary on everything from toxic masculinity to her Desi upbringing—in 2015 and never looked back. Today, she has 150,000 followers, a bestseller, Trust No Aunty, and her own apparel line. And she’s not done. She has teamed up with Microsoft Surface to use her artistic talents to help raise money for the charitable organization Rainbow Railroad, which supports people in international LGBTQ communities who are fleeing persecution. Using her Microsoft Surface, Qamar created a sticker pack inspired by her art.

Qamar created the “Hatecopy’s Zabardast Sticker Pack!” ($10/pack, at hatecopy.com) using the Surface Pen on her Microsoft Surface (starting at $529, at microsoftstore.ca).

On her inspo for the sticker pack “My fans were always asking me to make stickers, so I thought ‘What better opportunity than to do my first sticker pack with Microsoft?’ My Surface travels the world with me—I collect stickers from all the other brands that I work for and put them on my Surface. So I thought it would be really cool to make a sticker pack that I could cover my surface in. The concept is “digital didi,” which means “digital sister,” and it has all the greatest Hatecopy hits—the straight jalebi print in a sticker form, cyborg eyes, the little arrows, callouts, everything pop art. They’re bright red, so you can’t miss them. It’s artwork that demands attention.”

On her first Microsoft Surface “I got my first Surface when I was working at the desk job. It was a present to myself because I never paid attention to myself and I didn’t pay attention to my craft and my artwork. It’s the thing that started Hatecopy, essentially. It was a tiny little powerhouse that turned my ideas into reality.”

On the power of technology “Being online helped me find a community. When I used to work in the ad industry, I was the only woman in the room and the only person of colour in the room a lot of the time. So it got very lonely. There are things that I would feel, like ‘Am I crazy or did someone really talk to me like that? Is this legal?’ There were concerns, and I didn’t know how to share them, but I knew that going on Instagram or online was my safe space.”

On the source of her inspo “I live in the Distillery District in Toronto, so I just step outside and go to an art gallery. A lot of my inspiration comes from the way people interact with me—how they speak to me and sometimes at me. My advice on finding what inspires you? Take some time for yourself and find that creative outlet, even if it’s just doing your hair a different way or trying new makeup. It’s healthy to express yourself and healthy to figure out who you are.”

“I don’t know what I would have done without the Internet,” says transgender activist and artist Stef Sanjati. Sanjati, now 22, launched her YouTube channel at 13. Soon after posting videos about her transition and her genetic condition, known as Waardenburg syndrome, she found a community that she otherwise would never have known existed outside of her small town. “I was the only queer person at my high school, and I had no idea who I was,” she says. “Online was the one place I could go to find people who had been through what I was going through.” That’s why she has thrown herself into using her Microsoft Surface to design a graphic for a sweater, the proceeds from which support the LGBTQ organization Rainbow Railroad. Here, she talks about her inspiration for the project and understanding that we are never alone, even when we think we are.

Sanjati created the design on her “#BREADSQUAD” hoodie ($60, at hayleyelsaesser.com) using the Surface Pen on her Microsoft Surface (starting at $529, at microsoftstore.ca).

On the inspo for her hoodie “The design on my sweater is this happy little bread slice. It was hand-drawn by me on the Surface using Adobe Illustrator. My brand over the past three years has been very maternal. I wanted to fill in that kind, nurturing, mothering role for people who didn’t have it. There are a lot of young trans people who don’t get parental acceptance, and they miss that feeling of nurturing. I also love bread, and my audience saw me eating lots of bread. [Laughs] It caught on that I was ‘bread mom.’ Bread represents home and hearth and comfort, but it also represents access to food and resources. To me, bread is just a unifier.”

On the power of one “A girl reached out to me on Instagram, and I noticed that she was always taking pictures from an angle so that half of her face wasn’t in the shot. She told me that just seeing me be unapologetic about embracing my features encouraged her to find that self-love as well. And the last time I checked, she was posting photos of her entire face. It’s so freeing just to not be constantly worrying about what your face looks like.”

On living your truth “When I was younger, I was terrified and couldn’t imagine a future where I was alive, let alone one where I was happy and thriving. To people who are in that position now, know that there is something incredible out there for you. Stick it out. Find community where you can. It doesn’t have to be something perfect; it doesn’t have to be something physical; it can be digital. That’s the incredible power of the internet: It can completely transform your life in no time.”

On how she de-stresses “It isn’t necessarily unplugging. I actually love playing video games online with my brother and his wife, who live in the United States. That’s our social time—going into this digital world where we can all be together in the same place, and that’s really important to me.”