ELLECanada.com’s Karen Bliss travels to New York to hear a clip and catch a glimpse of one of music’s most mysterious songstresses, Sade. 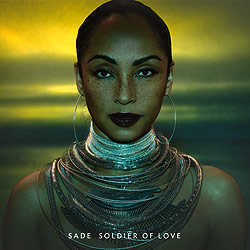 Looking out at the Manhattan skyline through a 50 x 90 glass wall, drinking pear bellinis and wine, and sampling a variety of canapés, about 300 people from the media, record label and other areas of the music industry, some flown in from Canada, were treated to a preview of Sade’s new album,
Soldiers of Love — with Sade Adu herself.

It was as if the record business was never in trouble and it was the ‘90s all over again, but a new Sade album is a big occasion. The English band fronted by the Nigerian beauty has only released six studio albums in 25 years, the last of which was in 2000 called
Lovers Rock. And with more than 50 million albums sold since their 1984 debut,
Diamond Life, throwing an elegant bash at the Lincoln Center’s 5th floor Allen Room for such an elegant act doesn’t seem extravagant or inappropriate.

With Adu’s name and image projected on the walls of this tiered room, Sony Music Label Group chairman Rob Stringer introduced
Soldier of Love, calling it a “rare event” and stating that in the 21 years that he has worked with Sade —Adu (vocals), Stuart Matthewman (guitar, sax), Paul Denman (bass) and Andrew Hale (keys) — they have only released three studio albums and some greatest hits. “Less is more,” he said. The album — which comes out February 8 — was then cranked on the state-of-the-art sound system.

Given just a one-sheet with the album artwork, the track-listing and writing credits, it was a little difficult to stay focused on the lyrics and the song order, as servers interrupted with wonderful appetizers and people socialized, but it was certain that
Soldier of Love stays true to Sade’s romantic-sounding jazz and soul fusion that made “Smooth Operator,” “Sweetest Taboo” and “No Ordinary Love” such timeless classics.

Produced by the band with long-time collaborator Mike Pela, the album begins with “The Moon And The Sky,” unfolding like a long seduction, but with her oft-pained lyrics: “
So why did he make me cry?” and “
We could have had more than the sky.” It’s strange that no matter what turmoil Adu is singing about that she makes it all sound so gorgeous. “Soldier of Love” is the title track and first single, currently at radio, and has a dark, chunky soldiering beat topped with her beautiful voice. “I’m doing my best to stay alive,” she sings.

More with Sade on the next page …

Other songs, such as “Babyfather” are harder to decipher over the din. Is she singing “
Your daddy knows you’re a fling?” Doesn’t sound very nice or romantic. That’s an answer that will have to wait until the
Soldier of Love comes out and the lyrics are available. But really, with any Sade album, it just doesn’t matter what she’s singing. The band writes old-school albums, meaning from beginning to end there is a flow, a vibe, a feel that takes you on a journey. Maybe, Sade’s is mournful and aching, but through the sadness there’s perseverance to find that perfect someone.

Adu turns 51 in January, and as she circled The Allen Room chatting with enamoured fans (yes, from the music industry) and posed for photos, one couldn’t help noticing that she hasn’t aged a bit. She is as elegant and poised and flawless as her music, and it was fun to watch how excited people got that she was there in attendance. Even for Sade, a new album must be an event.