Uma's dad shows us how to get happy. 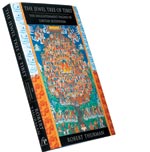 Robert Thurman has just wrapped an interview, and a photographer is taking a few snaps. “Are both my eyes pointing in the same direction?” he asks the Chilean photographer from The Globe and Mail and then explains matter-of-factly, “Because one of them is a glass eye, you know.” Assured that, indeed, both eyes are aimed at the camera, Thurman poses like a pro for a couple of photos and then bids the man goodbye with a hearty handshake and a “Con mucho gusto, mi amigo.” Thurman is in Toronto to promote his latest book, The Jewel Tree of Tibet (Simon & Schuster Canada). The work, he says, arose from a spiritual retreat he took with his students. Throughout the six chapters, the reader is introduced to a practical system for better understanding the world and herself, thus leading to cheerfulness, among other positive outcomes.

The blond publicist from Simon & Schuster apologizes. “He’s running a bit late, I’m afraid.” (As it turns out, Thurman, a professor at New York’s Columbia University, loves to talk, often giving a full, generous answer to any reasonable question.) “He has been going like this all day; I wish I could just rub against him and get some of his great energy,” she says.

“Would you call that chartreuse?” Thurman asks cheerfully, pointing to my sweater. And then, once we’re sitting face to face for the interview: “Is that a diamond at your throat? Did you know it’s very good for one’s thyroid to wear a diamond there?” When I tell him that I, too, have an interest in gems as amulets, Thurman shows me his left hand. On his ring finger, he wears a large, round gold ring with eight different stones set in a circle. “Each one represents a planet,” he says, “but one of them fell off.” “Which one?” I ask. “I don’t know!” he answers, laughing.

It’s clear from the get-go that Thurman is not your typical dry prof; nor is he one of those sanctimonious New Age Buddhists. He is, however, a scholar, a teacher, a spiritual seeker-and an old-fashioned gentleman. (At the end of the interview, he gallantly took my right hand and kissed it, saying, “In the European manner.”)

In The Jewel Tree of Tibet, Thurman instructs the reader to use her imagination to create her own wish–fulfilling tree where, on each bejewelled branch, a lotus flower sits, its heart occupied by one of her teachers (or mentors). “You can place anyone up there,” he explains. “A parent, a religious figure, even a Hollywood star. I would put Richard Gere there. No, wait, I know him too well,” he says, chuckling. “I would put Keanu Reeves up there, how he was as Neo in The Matrix–except I’ve heard that in real life, he’s not too sharp. It’s not good to know too much about people!” he says, with a twinkle in his eye.

When I ask his opinion about the cultural habit of people looking to movie stars for guidance on how to lead their lives, Thurman says he doesn’t have a problem with it. “One year, I went with Uma to the Academy Awards and the Governor’s Ball. What I found there was a real sense of family, as well as of noblesse oblige.” He says that acting for the happiness of others brings the most joy. “Nothing feels better than when I find the perfect doll for one of my grandchildren,” he says, beaming.