Why are we still obsessed with Princess Diana?

Twenty years after her death, we assess the place of the "people's princess" in pop culture. 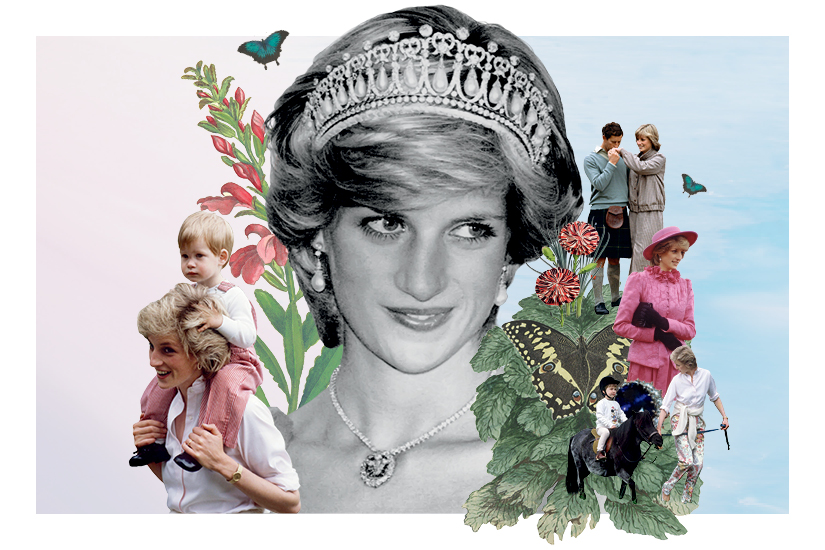 Princess Diana’s death is the first news story I can remember being obsessed with. I was eight when she died in 1997, and while I can’t remember where I was when I heard she’d been in a car crash in Paris, I do remember the days after: snatches of information heard on the car radio about tunnels, a Mercedes and the Ritz, the lurid pull of those quickly born conspiracy theories on the pages of tabloids in the supermarket and, most vividly, sitting cross-legged in front of our television and watching her sons’ stoic march behind her coffin as it rolled past crowds of strangers, some hysterical in their grief for a woman they’d never met.

For me, at the time, this spectacle was a glimpse into an adult world I didn’t quite understand; it starred a woman who looked a lot like my mother (a blonde who was close in age and also had a penchant for blue eyeliner) but who lived a life of ball gowns, tearful television interviews and, posthumously, Elton John changing the lyrics to a song for her. (Tangent: “Candle in the Wind” was one of the first songs I learned for the piano—well, the first bars at least.)

And now, 20 years later, it feels like she’s everywhere again — not in quite the same way, of course, but still ubiquitous: There’s an exhibition of her clothes at Kensington Palace, a 200-page compendium of iconic photographs called Remembering Diana: A Life in Photographs and a statue of her that, once completed, will be installed in the public gardens at Kensington Palace. In addition, BBC and HBO are airing documentaries later this year, and, perhaps most exciting, she’s the focus of Ryan Murphy’s next season of Feud. That’s not even taking into account her Internet presence, which encompasses thousands of Tumblrs and Instagrams and a near-daily supply of articles with titles like “The REAL Reason Princess Diana Always Carried a Clutch.” (I’ll save you the click: It was apparently to cover her cleavage as she stepped out of cars.) Obviously, it’s all tied to marking the two decades since her death, but Mother Teresa died later that same week, and, well, you certainly don’t get reams of minutes-old stories about freshly leaked recordings and MI5 agents confessing to her murder when you Google the Nobel Peace Prize-winning nun.

“Princess Diana is an iconic figure, and her iconicity was enhanced through her death,” says Pauline Maclaran, co-author of Royal Fever: The British Monarchy in Consumer Culture, when I ask her whether all this fuss is just because we’re a society that loves marking an anniversary. “But it’s interesting to see how the royal family has recently been repositioning the Diana brand within their overarching umbrella brand to keep the legend alive in a very positive way.”

How so? Maclaran points to recent interviews with Prince William and Prince Harry in which they offer up information about their mother more freely than ever before. Yes, these are genuine remembrances of the “Mummy” they loved, but there’s also a little bit of strategy at play here. “She’s no longer seen as the ‘rebel,’” says Maclaran, referring to the ostracization Diana faced after her very messy and public divorce from Prince Charles. “She’s now seen as the grandmother she would have been and for her charitable works.” This isn’t only evident in interviews; it’s also apparent in subtler ways: the boys favouring the same charities as their mother, Kate wearing Diana’s engagement ring and, yes, even George wearing outfits that not-so-subtly mirror the ones William wore as a child. “The Diana brand has had three major [iterations] in the press,” adds Maclaran. “First as a naive fairy-tale princess, second as an underdog victimized by the royal family and then after her death that public emotion and support that transitioned her yet again into some kind of saint, a holy mother.”

The Duke and Prince Harry are pleased to share three photographs from the personal photo album of the late Diana, Princess of Wales that feature in the new ITV documentary ‘Diana, Our Mother: Her Life and Legacy.’ The 90-minute film, made by Oxford Film and Television, celebrates the life and work of Diana, Princess of Wales in the 20th anniversary year since her passing. In the documentary, The Duke and Prince Harry recall fond memories from their childhood as they look through photographs in a family album assembled by the late Princess. ‘Diana, Our Mother: Her Life and Legacy’ will air on @itv at 9pm on Monday 24th July.

And now, with the passage of time, we’re entering what might be called the fourth phase of Brand Diana. “She’s being viewed as a more complicated figure now,” theorizes Carolyn Harris, historian and author of the new Raising Royalty: 1000 Years of Royal Parenting. “We are seeing more balanced accounts of how her marriage to Charles broke down, whereas before, Camilla, whom he is now married to, was very much the villain.” She also points to the general perception that Diana was the better parent—one who made her kids stand in line for McDonald’s and gave them hugs in public—while it’s emerging that Charles was (and still is) as attentive a parent, just a more private one.

READ MORE: Could prioritizing the happiness of women save the world?

More than anything else, though, Harris attributes the continued interest in Diana to the intense personal connection so many people had with her—because of her unusual and unroyal vulnerability, her tactile approach to causes like homelessness and leprosy and the glamorous figure she cut. “You’ll often see people at William’s and Harry’s engagements who are eager to talk about Diana with them or say kind things about her,” she says of the former Princess of Wales’ wide appeal. “She was someone who was not shy about revealing her emotions to the public, so people felt like they knew her.”

But what about people who were children, or even not alive, when Diana died? As it turns out, I’m not alone in that demographic. “I remember getting out of bed and finding my mother watching the breaking news coverage,” says Jess Ilse, who works for Royal Central, a royal-news website. She was nine at the time of Diana’s death. “My parents saved all the newspapers that week, and we watched all the specials and her funeral. My mom bought me the Princess Diana Beanie Baby Bear when it came out; it’s still in my closet at my parents’ house.” Ilse is now a proud monarchist and attributes a lot of that to Diana. “She breathed life into the royal family,” explains Ilse. “She held hands with AIDS patients, she walked through land-mine-laden areas and she modernized the way royals behave—although I’d be lying if I didn’t say that I’m also interested in her impact on fashion and how her style has influenced the next generation of royals.” Ilse has amassed a collection of royal-related memorabilia, the most prized of which is a porcelain Princess Diana doll in a blue velvet dress, a replica of the one she wore at the White House when she danced with John Travolta.

And that’s the magnitude of Diana’s legend: It’s the sort of myth that has room for everything from Hollywood satire to kitschy collectibles. She once said in an interview that she wanted to be “the queen of people’s hearts”; 20 years on, it’s safe to say that she has achieved that. Commemorative spoon optional.