What Auditioning for Outlander Taught Me About Indigenous Representation on TV

Seeking representation in Hollywood one Outlander audition at a time. 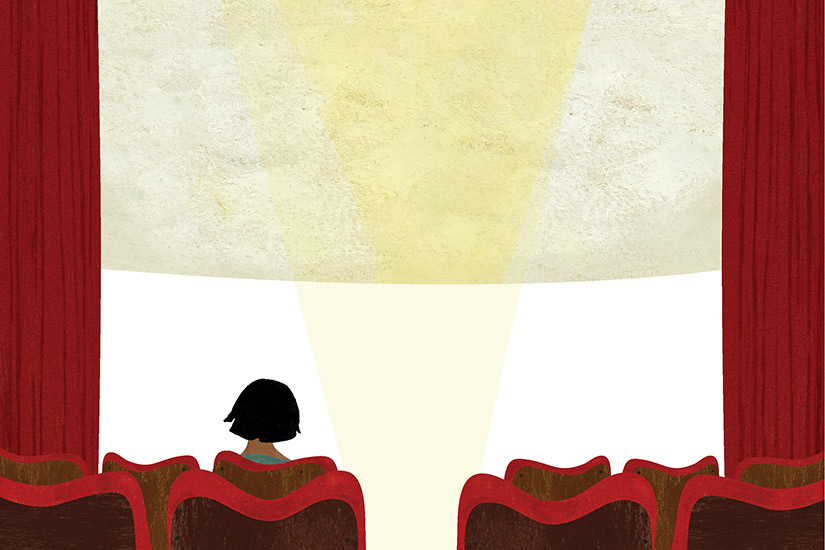 I’m sitting on a black plastic chair in the auditorium at the Native Canadian Centre of Toronto, jiggling my legs as the casting director in front of me studies my application and headshot. I’m here, along with 30 other Indigenous men and women, to audition for the role of “background actor, Indigenous, age 25-plus” for the wildly popular (and wildly sexy) series Outlander. Producers had put out a call for Indigenous extras to appear on the show’s fourth season as time-travelling English combat nurse Claire and her hunky Scottish warrior, Jamie, journey to the New World—or, as I call it, “home.”

I’m jittery, but I’m excited too, and not just because if I’m picked, I’ll get to go to Scotland, where the series is filmed. I’ve never acted a day in my life. Nor have I ever been on a movie set—if you don’t count the times I’ve gawked at the location shooting of Suits in Toronto’s financial district. But I’ve always been obsessed with movies and TV (IMDb is my favourite website), and I’m curious to see what filming is like. And, most importantly, I haven’t seen a lot of people who look like me on television or in the movies, so this casting call feels pretty big.

I’ve been searching for representations of Indigenous people in pop culture since I was a kid growing up in the ’80s on the Six Nations of the Grand River reserve in southwestern Ontario. Among my limited options? Old Westerns with people in wigs dressed up as native people (not cool), Dances With Wolves (I’d rather watch it from the POV of the Lakota people deciding to adopt Kevin Costner than the other way around) and Disney’s Pocahontas. (Do not get me started on the song “Savages.”) Or I could pick up a VHS copy at the local video store (I did say I was an ’80s kid) of anything starring Graham Greene. And while, yes, there were some Indigenous-made movies, like Dance Me Outside, Smoke Signals and Once Were Warriors—which my friends and I would watch at sleepovers between scarfing down junk food and telling ghost stories—they only came around every few years.

Since then, there has been some movement toward inclusivity on Canadian TV with the creation of APTN (Aboriginal Peoples Television Network) in 1992 and shows like North of 60 and, more recently, Mohawk Girls and Blackstone. Mohawk Girls is one of two shows that reflect a version of life on the reserve—people greeting one another in their native languages, our dry sense of humour and how tough we can be. Blackstone is a mesmerizing drama with all the elements of the disappointingly real issues Indigenous people face, such as missing and murdered women and the high prison and youth-suicide rates. I’ve become a cheerleader for these series because they’re not only highly bingeable but also show Indigenous people as modern people in scenarios that we all face, from trying to fit in after moving to a new place to dealing with family pressure. Displaying these commonalities goes a long way toward humanizing our people, who often seem relegated to history books.

I can’t help thinking about this during my audition as I try to concentrate on what feels like the weirdest job interview ever. I’m asked to hold up my application and say my name and which nation I’m from. The impassive casting agent in front of me doesn’t blink at my Greek married name, but he does inquire what I do for a living, if I’m cool with wearing a wig (I guess no one had chic bobs in the 18th century) and if I have any problem with going to Scotland for a month. Then comes the hard part: the acting. I’m asked to turn to the camera and give a stern face, which, as anyone who knows me knows, is next to impossible, unless I’m dealing with my four-year-old daughter having a full-blown tantrum. A few takes later, I’m done. As I leave the auditorium, I mouth “Good luck” to a woman I was sitting beside earlier.

As I look back now, it felt good to be in a room of Indigenous women and men—even if we were vying for the same roles—but the experience also made me think about the implications of us always being in the background. Although this Outlander casting call felt like a great step toward representation, it also shows how far we still have to go. We have Indigenous voices on Indigenous TV, but what about mainstream pop culture? I want to see more Indigenous people playing non-specifically-Indigenous parts—because, yes, while we do have unique cultures and world views, we are not defined solely by our heritage. It’s important for non-Indigenous people to see us filling roles like Graham Greene’s cop character in Die Hard With a Vengeance. We can be smart city detectives too! Indigenous voices also need to be behind the scenes, writing, producing and directing content.

The needle is moving, albeit slowly. Actress Tantoo Cardinal and filmmaker Danis Goulet were recently invited to be members of the Oscars Academy, and many of Canada’s media organizations are focusing on bettering Indigenous representation, with government investment in Indigenous productions and hiring and the creation of a dedicated Indigenous Screen Office.

In the end, I didn’t get a callback to be one of 10 women to head to the hills of Scotland and appear for fleeting seconds behind Jamie and Claire. My movie career might not have kicked off, but I am encouraged by the historically accurate hiring tactics of such a big-budget series. Hopefully, in the near future, there will be a time-travelling romance where the main cast looks like me. You know I’ll be watching.