Why Wong’s Asian-stereotype-busting comedy finally made me fall for stand-up. 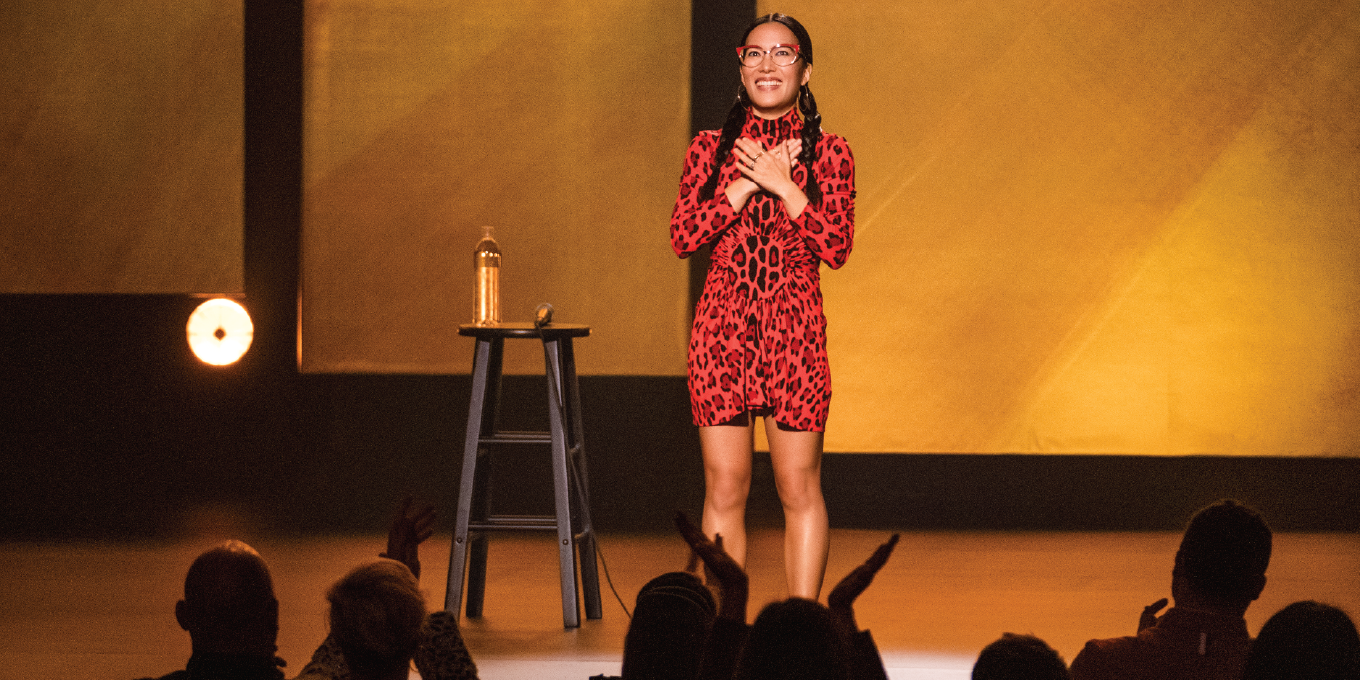 I discovered Ali Wong by accident. I was mindlessly scrolling through Twitter when I came across a video of an extremely pregnant woman doing stand-up comedy. She was small in stature and walked around with the confidence of a WWE wrestler. She swore and told dirty jokes, and I immediately knew I had to learn more about her.

That clip I saw of Wong was from her breakout Netflix special, Baby Cobra. In it, she voices her desire not to go to work anymore, making fun of Facebook COO Sheryl Sandberg’s famous book and its discussion of women in the workplace and feminism. “Her book is called Lean In,” says Wong. “Well, I don’t wanna lean In. I wanna lie down!” It was revelatory to see an Asian woman openly say she didn’t want to work. Those of us who are the children of immigrants often can’t afford to complain. When I was growing up, my parents shuffled me in and out of extracurriculars, Chinese school and math tutoring, setting up the expectation that I would go to a good college and become a doctor, lawyer or scientist. Instead, I went against their expectations in pursuit of happiness, hustling through unpaid internships and writing free articles for publications to become a journalist. I admire Wong not only for taking an unconventional path and succeeding but also because she finally made me pay attention to the world of stand-up.

After seeing that clip of Wong, I watched the rest of Baby Cobra. She had the vibe of a cool older cousin imparting life lessons, and it was the first time I could actually relate to a comedian’s jokes.

These days though, I am seeing her comedy in a new light. Earlier this month, a representative on Wong’s team confirmed she would be divorcing her husband Justin Hakuta after eight years of marriage.Wong has often been very open on topics around sex, life, motherhood, pregnancy and marriage in her work. In fact, some of her greatest jokes are dedicated to the latter. In her specials, she often poked fun at Hakuta, telling Health Magazine that she would get him to veto her material, and that no topic was “off-limits.” So much so that in her latest comedy special from this February, Don Wong, spent a lot on how Wong fantasized about cheating on him. “I want to have a family, a career and a side piece,” she deadpans.

That’s why I particularly felt for her when news of her separation came to light. Perhaps there has been some truth in what she’s been saying on stage. After all, her honesty and the loud and unapologetic nature of her comedy was what drew me to her in the first place.

When I was growing up, most comedians I saw were white or male, and if there ever was an Asian comic onstage, they either made self-hating jokes that reinforce stereotypes or did embarrassing impressions of their relatives’ accents for cheap laughs. I was particularly turned off by a video of comedian Esther Ku that I saw in 2012, when I was in university. In the clip, she explained why she would never date men within her race and then went on to belittle them. “I feel bad that they’re all single but not bad enough to date them!” she said. That tasteless joke showed me that the Asian community deserved better.

The only other Asian comedian I encountered around that time was Margaret Cho. I was just two years old when she starred in All-American Girl, the first sitcom to feature an Asian-American family. But the show also had its flaws—Cho had no creative control even though the show was based on her stand-up, and she has since talked about the immense pressure of being the first Asian female lead on TV.

Given that there is no limits to her jokes, Wong’s has openly talked about her sex life, sharing in detail her experience of getting HPV and bringing up past hookups. She also spoke about the miscarriage she had before getting pregnant, telling people not to feel bad for her. (“They were the size of poppy seeds. I’ve picked boogers bigger than the twins I lost.”) It was an opportunity, she joked, to guilt-trip her then-husband, who took her to a Beyoncé concert and bought her a bike off Craigslist to help her heal. “For 30 days, I finally had the marriage I’d always wanted!” she proclaimed. The bit was funny, but it was also comforting for women to see someone joke publicly about the still taboo topic. 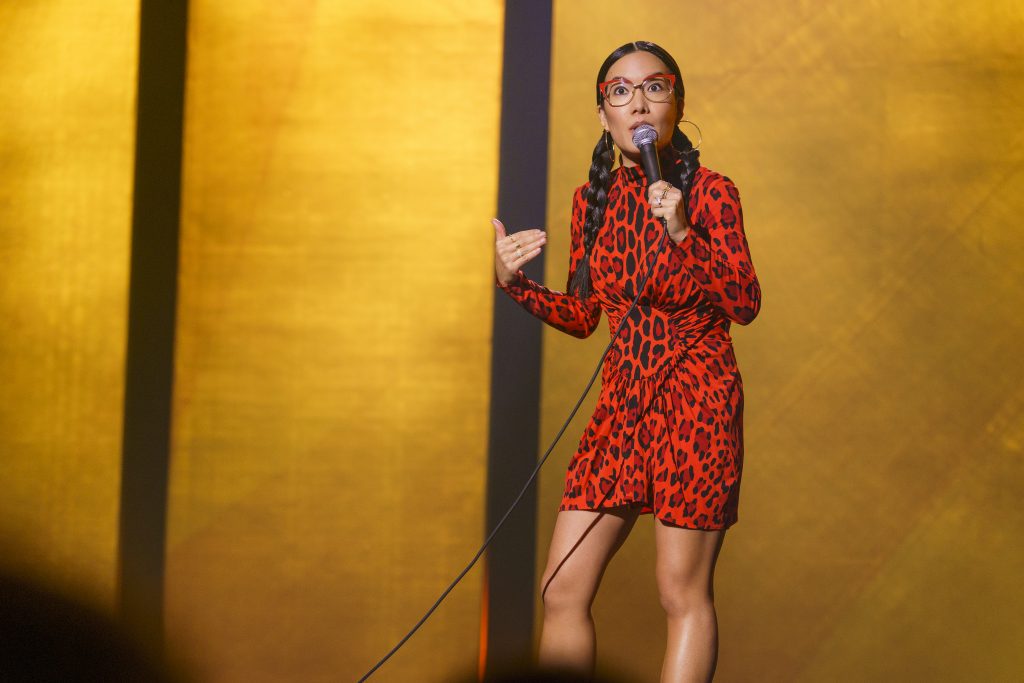 Onscreen, Asian women are too often portrayed as proper and demure, so Wong’s in-your-face brazenness was extra refreshing. In 2017, I went to see her perform live in Toronto for her next special, Hard Knock Wife, and realized just how much she’d been embraced by Asian communities across North America. People even dressed up like her at her shows, donning tight striped dresses and fake pregnant bellies.

When Wong finally appeared onstage, she was pregnant again, making the show an apt sequel to Baby Cobra and giving each of her children a comedy special. In her signature straight-up style, she started by saying, “I heard a rumour that all the Asians in this city have congregated in this theatre tonight.” Then she delivered the punchline: “Thank you for coming with your white boyfriends.” My friend and I looked around, saw a number of white male faces in the crowd and laughed. Wong may have been bringing up the elephant in the room, but it was also an inside joke between her and the Asians in the crowd.

What I love about Wong’s humour is that she isn’t afraid to make us uncomfortable and challenge us, calling out harmful tropes like the fetishization of Asian women. In Baby Cobra, she points out the number of Asian-woman-white-man couples she sees across America, calling the hipster neighbourhoods where they’re particularly common “Yoko Ono factories.” She later jokes that she understands why Asian women love being with white men: because it makes them feel powerful. “You feel very picturesque when you’re with a white dude, you know—you feel like you’re in a Wes Anderson movie or something,” she says. “White dudes, they teach you about a lot of cool stuff, like voting and recycling and disturbing documentaries.”

I, too, felt some kind of pride when I dated a white guy, my first high school boyfriend. He openly admitted that he liked me because I’m Asian, and I was flattered. It felt edgy to go against my parents’ expectation that I date within my own race, but now I feel a pang of embarrassment for being so obviously fetishized. Watching Wong perform was the first time I’d seen an Asian woman openly proclaim her attraction to Asian men and proudly talk about being married to one. “I don’t know why people don’t go for them!” she says. “Asian men are the sexiest. They got no body hair from the neck down. It’s like making love to a dolphin.”

Even now, I have Asian friends who tell me that they would never date an Asian man because they don’t find them attractive, something that’s a result of our perceptions of Asian men being shaped by how they’re portrayed in the media and movies. They’re often desexualized, playing the quiet nerds, sidekicks, villains or punchlines. As much as I crave seeing Asian actors on TV and in movies, these types of representations trickled into our real lives too.

Wong praising Asian men shouldn’t have been groundbreaking, but it was meaningful for me, especially since I’m now dating an Asian man and realize that our similar backgrounds and cultures helped us develop a healthy relationship that’s free of problematic stereotypes. Wong puts this issue front and centre in the romcom she co-wrote, Always Be My Maybe, in which her character dates three Asian men: a successful restaurateur (Daniel Dae Kim) who doesn’t want to get married, a fictionalized version of Keanu Reeves and an underachiever (Randall Park). In the movie, the men’s races are the least interesting aspects of them. Instead, their personalities, ambitions and love move the story forward and ultimately help bring Wong’s and Park’s characters together.

Always Be My Maybe is also the first romantic comedy I’ve seen that’s centred around Asian characters. I cried after watching it because it portrays our lives as normal: It’s a straightforward romcom about two people falling in love, eating dim sum and going to concerts. Wong breaks down barriers with her simplicity, seeing the importance of poking fun while also upholding us in her work.

Although Asian representation continues to be sparse, Wong has helped fill some of the void. She’s been a particular source of light for me in recent months, a time when the Asian community has experienced anxiety and fear over hate crimes during the COVID-19 pandemic. Sometimes, I rewatch YouTube videos of her comedy just as a de-stresser. That’s why I’ll always support her, despite the awkwardness of her most recent and third special, Don Wong, from earlier this year.

Now her family’s breadwinner, Wong addresses what her husband thinks of what she says about him in front of huge crowds: “He doesn’t give a shit about what I say onstage because he’s too busy living the life I wanted for myself!” Her jokes, sharp enough to stab, was proof to me as a fan that they had a  strong relationship. Wong ends her special by saying her husband allows her to be herself. It hits differently knowing the reality of their relationship now. But at the same time, I see a woman doing what she feels best for her, and that is admirable in itself.

I’m grateful to Wong because she has made me laugh even during my darkest moments over the past few years. To see a strong and confident Asian woman owning her power onstage is a beautiful thing, and while she may not have strived to become a role model, it’s what she has accidentally done. Whenever her next special may be, I’ll still be tuning in. Divorce will undoubtedly shape Wong’s perspective on life, but I know she’ll still be making me and thousands of her fans laugh with whatever she comes out with next.

Read more:
Cynthia Erivo’s Newest Role in Roar Is for Modern Women
Zoë Kravitz Lives Life on Her Own Terms
Anna Chlumsky Is Asking All the Questions