The Importance of Recognizing Community, Embracing Identity and Speaking up Amid the Rise in Anti-Asian Racism 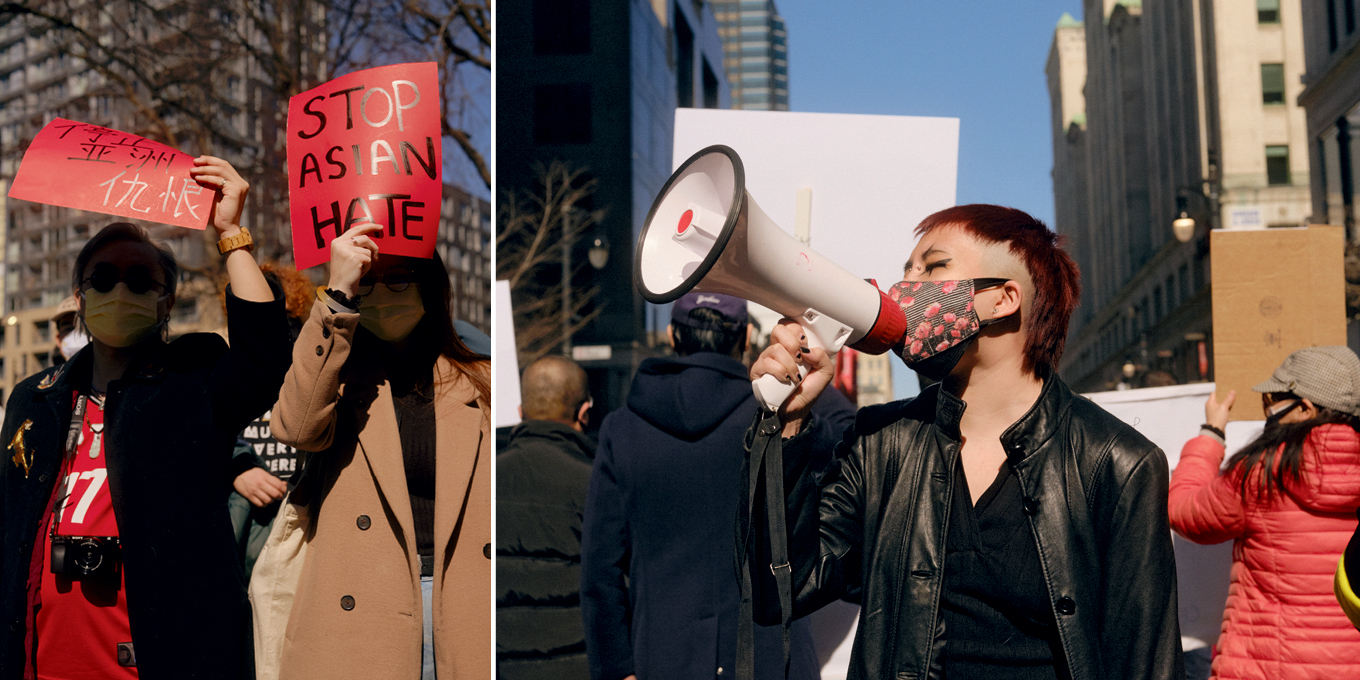 As a journalist, I must remain objective as part of my job. I need to shut down or brush off my personal feelings when covering a tough news story. But sometimes I have to report about what’s happening within my own community, and when things hit close to home, it’s especially hard to keep my emotions, and my identity, out of it.

When I was in elementary school, my ethnicity was both the butt of many jokes and a source of fascination. Classmates drew characters with slanted eyes on my notebooks and gave me the nickname “C.P.S.,” which stood for “Chinese Porn Star.” Some of them even looked up the word “chink” in the dictionary, which led to my being made the centre of a long-running terrible joke. On a vacation in Cuba when I was 13 years old, a man came up to me and blew me a kiss, while another asked me if I was Jackie Chan’s wife. In high school, a white boy I was seeing said he only dated Asian girls, which I took as a compliment at the time but now realize was a case of my being sexualized and fetishized according to a common pop-culture trope about Asian women. Despite all this, none of my experiences can compare with the level of hatred and violence that has been shown to Asians over the past year. It’s hard to avoid the headlines about people of Asian descent being spit on, yelled at and attacked. Recent surveys from the Chinese Canadian National Council found that there were more than 1,000 self-reported incidents of anti-Asian racism in Canada between March 2020 and March 2021. 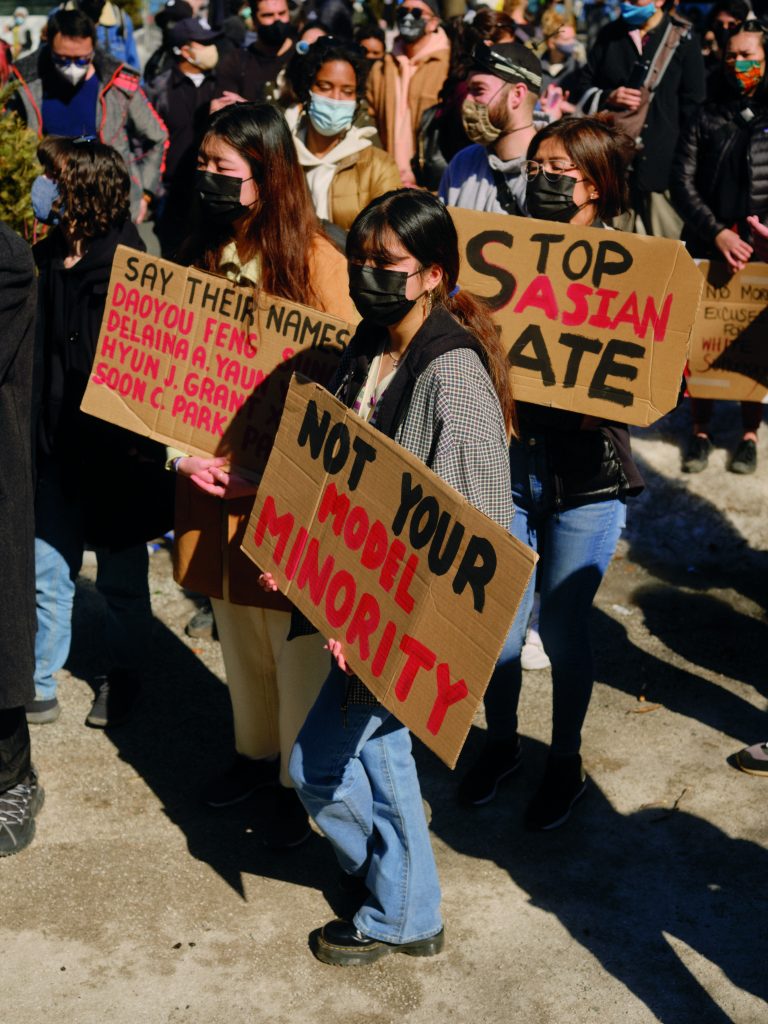 I was never comfortable opening up about my feelings growing up. Whether I was angry for being made fun of for my interests or ethnicity or struggling to understand a tragic news story, I didn’t want to be seen as sensitive or vulnerable. I also wanted to avoid confrontation, and it was easier to listen to others talk about their troubles. My habit of keeping to myself turned me into an attentive listener. These days, however, I find that bottling up my feelings is doing more harm than good as I struggle to make sense of the rise in anti-Asian racism in Canada and around the world. Worse, it’s triggering memories of incidents I spent years trying to overcome.

“Many people will say ‘I’ve never personally experienced any physical harm or any sort of attack to my own personal physical well-being,’ but there are certain microaggressions you’re reminded of,” says Phoebe Chin, a registered psychotherapist and art therapist based in Toronto. These microaggressions, she adds, might sound like “Oh, your English is so great” or “You’re so eloquent”—the subtext of these phrases being “for an Asian person.” “Even though there aren’t that many explicitly physical attacks, they activate all the memories we have of growing up as racialized people in a predominantly white country,” she says.

In mid-March, I woke up to horrific news coming out of Atlanta: A white gunman had killed eight people in a series of shootings at three massage parlours. Of the eight who died, six were women of Asian descent. I quickly buried myself in work to cope. And once again, I found myself wanting to be there for others rather than addressing my pain head-on. I posted on my social-media platforms, encouraging friends to reach out if they wanted support or to chat. But then I started getting messages asking “Are you okay?” I was overwhelmed by the attention. Not because I didn’t appreciate it but because I just didn’t know how to respond.

Chin says that many in the Asian diaspora are conditioned to contain their emotions because we’ve seen our parents put their families first, often to the detriment of their own well-being. “I think most Asian women, if not all, are socialized to think about everyone else before themselves,” she says. It’s something I’ve seen in my own life, growing up with parents who immigrated to Canada from Hong Kong in the 1980s. When my mom wasn’t at work, she would dedicate most of her time to cooking and cleaning and tending to my sister and me. Though she’d scold us over bad marks or ask us to tell her if someone was bullying us, I rarely saw her cry if something troubled her. And when I cried over something silly like a missing doll or getting a haircut, she’d tell me to move on quickly.

I understood why she did this. Growing up, she couldn’t afford to get too emotional. As one of 10 siblings in her family, she didn’t have much money, and moving to Canada was an opportunity to give us a better life. She’s still a strong-willed woman who puts her family first. According to Chin, this is called “scarcity culture.” “Immigrant parents have often survived by adopting this mentality that we need to hoard or save or never spend—and not just finances but also time and emotional labour,” she explains. “This is not to place blame on older generations but to acknowledge that while that mentality may have helped them survive, it isn’t always helpful to apply the same narrative to our current situations.” 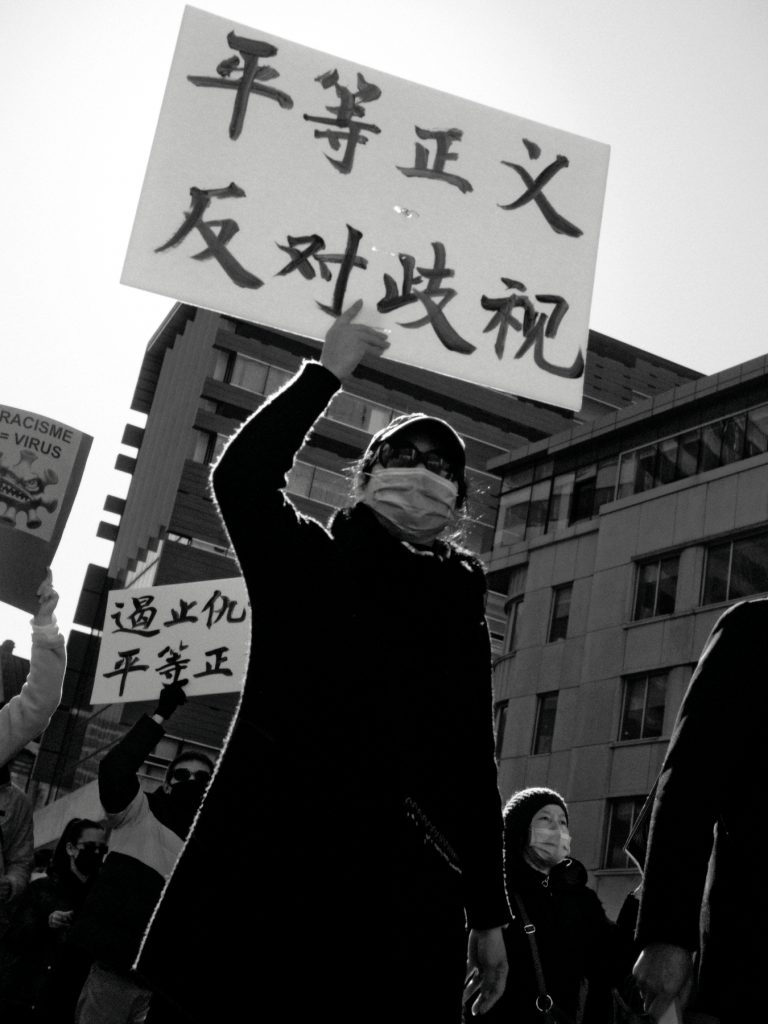 The grief I saw online over the Atlanta shootings stressed me out. I couldn’t listen to updates beyond what I heard on the morning news, and then I felt guilty for disconnecting from it, as if I wasn’t doing enough for my community. It wasn’t until a day after the shootings that I could fully start addressing how I felt. My sadness soon became overwhelming, and I knew at this point that I couldn’t stay silent. I checked in with friends regularly and attended online chat rooms hosted by members of the Asian diaspora around the world. We discussed everything from mental health and sexism to racism and the microaggressions we face on a daily basis. It was encouraging to see the number of people who felt strong enough to speak up. Most of all, it was therapeutic to know we’d all had similar experiences.

“I think we’re [at a place] where it’s okay to talk about these things,” says Fred Chou, a registered psychologist who studies intergenerational trauma at the University of Victoria. “[Recent events] have put this conversation about racism at the forefront, and I think in some ways it’s very empowering to be able to acknowledge that these are experi- ences that we’ve gone through.” Chou adds that he hopes the conversations the Asian diaspora is having can eventually lead to actions of solidarity with Black, Indigenous and other racialized communities.

Days after the Atlanta shootings, filmmaker Alice Wu encouraged people on Twitter to put their “other” names— their birth names or native second names—in their profiles. It was a suggestion made by her friend Dr. Jennifer Huang.

“It’s hard to avoid the headlines about people of Asian descent being spit on, yelled at and attacked.”

Feeling inspired, I tweeted: “what was used for years on my elementary-school records. The embarrassment I’d feel every time a classmate said ‘Who is Wing-sam?!’ made me ask my mom to change my name when I got to high school. Now, I hate that I felt so ashamed.” Changing and sharing my full name on social media made me feel sad that I had gone without it for so long but also proud that I was reclaiming a part of myself that I had often felt embarrassed about.

Five years ago, I would never have imagined that I’d see these kinds of conversations happening within the Asian community. Allowing ourselves the space to listen and share our collective experiences of racism and trauma has made me feel seen in ways I never anticipated. And each day, I feel braver about reclaiming parts of my identity that I have long tried to hide.

The Model Minority Myth Harms Us All
Here’s How You Can Support the Asian Community Right Now
Sandra Oh Delivers Powerful Speech at Stop Asian Hate Rally: “I’m Proud to Be Asian”