The new Texas law banning most abortions after about six weeks of pregnancy went into effect on Wednesday. 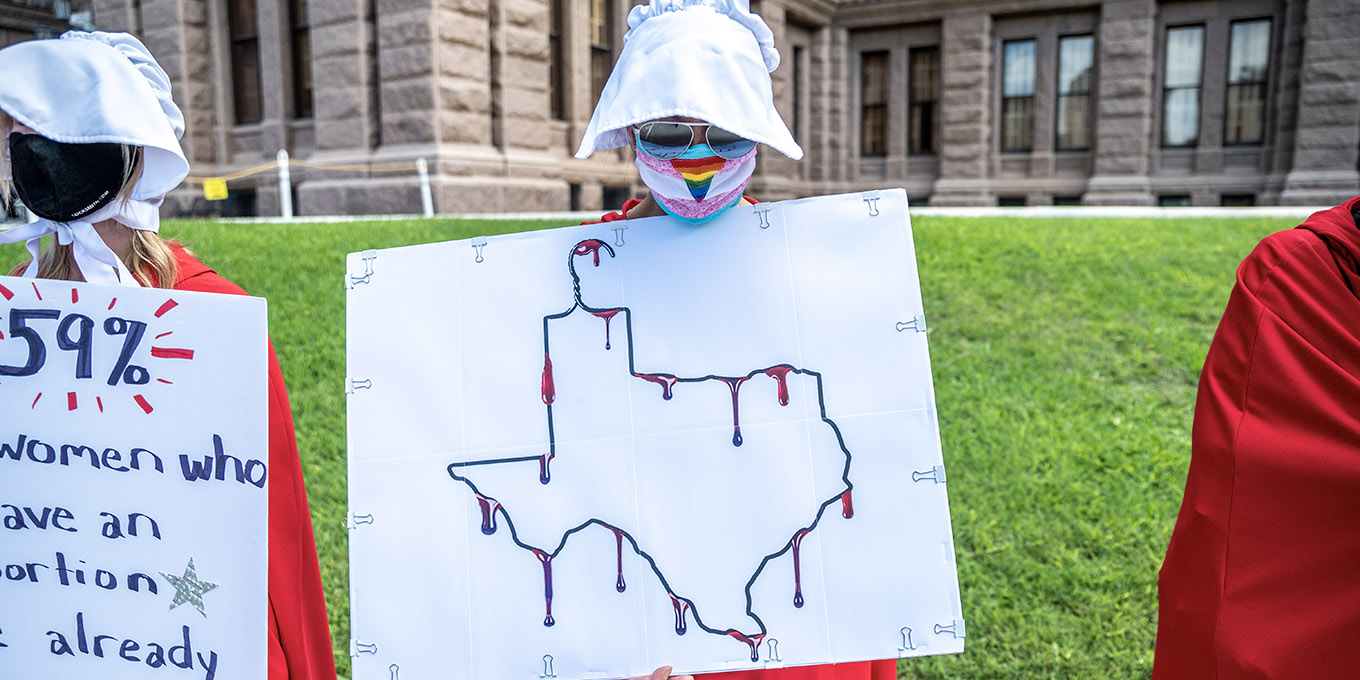 All over the United States, restrictive abortion bans continue to be introduced at the state level. In Texas, a new bill goes one step further by incentivizing individuals to enforce the law with a $10,000 (or more) award to anyone who successfully sues someone providing or assisting a woman seeking an abortion after six weeks of pregnancy. Even religious leaders who provide emotional and spiritual counseling to patients considering abortion could be liable under the law.

“The state has put a bounty on the head of any person or entity who so much as gives a patient money for an abortion after six weeks of pregnancy, before most people know they are pregnant,” Nancy Northup, president and CEO of the Center for Reproductive Rights, said in a statement to ELLE.com. “Worse, it will intimidate loved ones from providing support for fear of being sued.”

In response, a large group of abortion providers, abortion funds, support networks, doctors, and clergy members have filed a lawsuit seeking to block what they call an “unconstitutional ban” on abortion before the law takes effect. Here’s everything you need to know.

The Supreme Court allowed the most restrictive abortion law to go into effect.

On Wednesday, September 1 at midnight, a Texas law barring abortions as early as six weeks into pregnancy went into effect, as the Supreme Court failed to act on emergency requests from abortion providers and advocates to put the law on hold, CNN reports. The law, which allows individuals to sue abortion providers or anyone who may have been involved with helping someone get an abortion for up to $10,000, was originally signed by Republican Gov. Greg Abbott in May.

Texas banned abortions as early as six weeks, one of the most restrictive measures in the U.S.

In May, Texas Gov. Greg Abbott signed the ban known as S.B. 8 that prohibits abortion when cardiac activity in cells that will eventually develop into a heart is detected. This means that many women in Texas who don’t even know they are pregnant yet will not be allowed to get an abortion in the state. There are no exceptions for instances of rape or incest, but the bill offers a provision for “medical emergencies.”

When Abbott signed the legislation, which goes into effect Sept. 1, at a closed-door ceremony, he said: “Our creator endowed us with the right to life and yet millions of children lose their right to life every year because of abortion. In Texas, we work to save those lives. That’s exactly what the Texas Legislature did this session.”

The Texas abortion ban opens people up to legal action.

The new law allows private citizens to sue anyone they believe may have been involved in helping a pregnant person get an abortion. Not only can literally anyone sue abortion funds and providers, but they can also also sue friends of someone seeking an abortion—including the person who drove them to their appointment. Religious leaders who provide spiritual counsel to a woman considering an abortion could also be held liable. Unsurprisingly, Black and Latinx communities will be disproportionately impacted. According to The Washington Post, nearly two-thirds of all Texas abortions in the last five years involved Black and Hispanic women.

Texas is just one of several states that have passed extremely restrictive abortion laws, but this new bill is uniquely terrifying, because it gives private citizens the power to enforce the law. Those found guilty of performing or inducing an abortion, plus anyone who “aids or abets the performance or inducement of an abortion” in violation of the ban could face a $10,000 fine.

Although abortion patients themselves cannot be sued under the Texas law, almost anyone close to them can be (think a parent, an abusive significant other, or a healthcare provider). “The state has put a bounty on the head of any person or entity who so much as gives a patient money for an abortion after six weeks of pregnancy, before most people know they are pregnant,” Northup said. “Worse, it will intimidate loved ones from providing support for fear of being sued.”

Abortion rights advocates and providers filed a lawsuit to block the law.

On Tuesday, a lawsuit was filed in Austin by Planned Parenthood, the Center for Reproductive Rights, the American Civil Liberties Union, and several other groups in an attempt to block the law.

“Texas legislators have tried for years to completely—and unconstitutionally—ban abortion,” Planned Parenthood President and CEO Alexis McGill Johnson said in a statement to ELLE. “Now they’re trying a new tactic: giving complete strangers the power to sue anyone who provides or helps someone get an abortion. This new law would open the floodgates to frivolous lawsuits designed to bankrupt health centres, harass providers, and isolate patients from anyone who would treat them with compassion as they seek out health care. The cruelty is the point—and we will not let it stand. Planned Parenthood will do everything in our power to fight S.B. 8 in court and ensure that every Texan is able to make their own decisions about their health and their future.”

Senate Bill 8 is extremely dangerous and unprecedented, and we are asking a court to block it before it takes effect on September 1.

In order to block what the organizations behind the lawsuit call “unconstitutional” legislation, they are also reportedly attempting to block Texas judges from enforcing the law and court clerks from accepting the lawsuits.

Texas is not the only state with a dangerous abortion ban.

Abortion is still legal across the U.S., although restrictions and accessibility vary widely from state to state. Texas is one of just several states to introduce legislation that would make abortion illegal as soon as cardiac activity in cells that will eventually develop into a heart can be detected. For more on which states have introduced and voted on these bills, read ELLE’s explainer here.

In May, the Supreme Court announced it would consider the legality of Mississippi’s ban on most abortions after 15 weeks of pregnancy. Many abortion rights advocates believe this means the Supreme Court, which now has a conservative majority, will reconsider Roe v. Wade. For more on what the future of abortion access looks like, read ELLE’s explainer on new U.S. abortion laws here.

Birth Alerts
8 Small, Daily Changes You Can Make to Reduce Your Ecological Footprint
Has the Time Come to Critique Diet Prada?