What you need to know about the shootings and how you can continue to support the AAPI community. 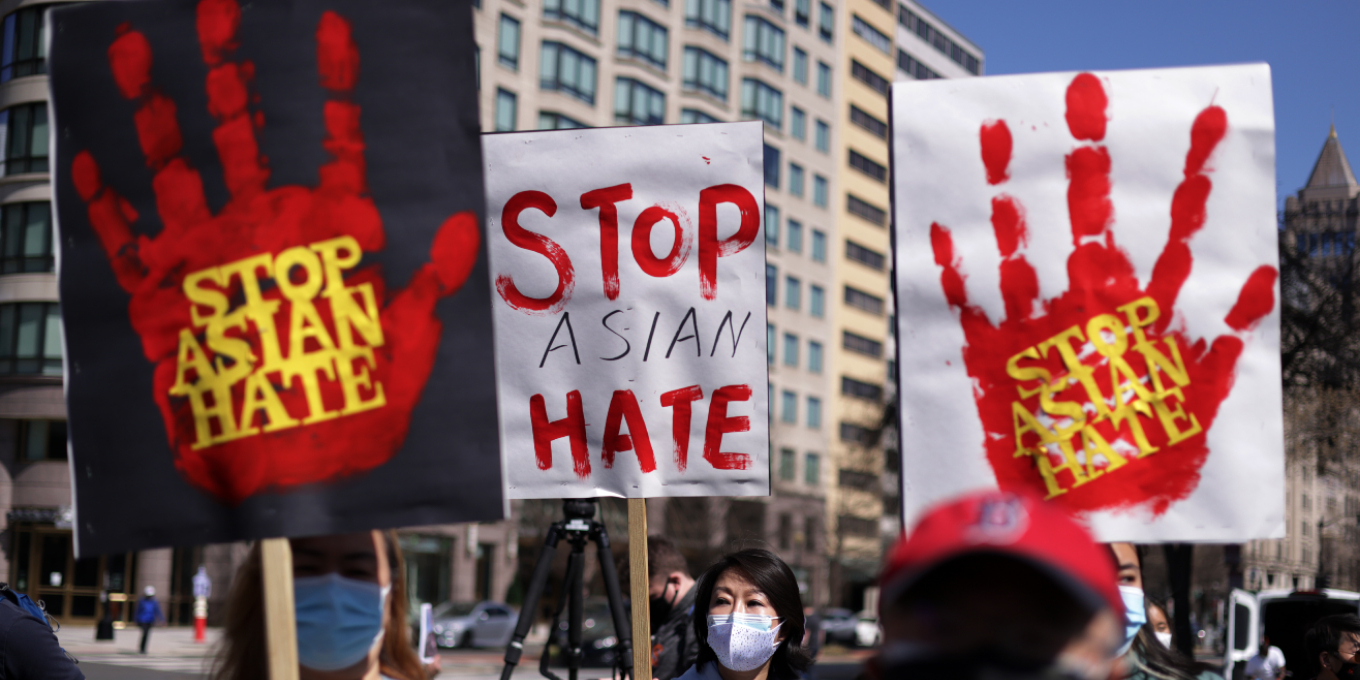 Update, July 28, 2021: Robert Aaron Long, a 22-year-old white man, was originally taken into custody following the Atlanta spa shootings in March and accused of killing eight people, the majority of whom were Asian women. Now, Long pleaded guilty to four counts of murder in Cherokee County and was sentenced to life in prison plus 35 years without the possibility of parole, according to The New York Times.

Long also faces charges in another county where the shootings took place. While The Cut reports he took a plea deal to avoid a death sentence on charges in Cherokee County, prosecutors in Fulton County still intend to seek capital punishment and charged Long with murder, domestic terrorism, and aggravated assault. He is scheduled to be arraigned in Fulton County in August.

Original post, March 19, 2021: On Tuesday evening, eight people were shot dead at three different spas near Atlanta, Georgia. According to the New York Times, six of the eight people were Asian, and seven were women.

This shooting comes after months of violent attacks against Asian and Asian Americans, several of which have gone viral on social media. The organization Stop AAPI Hate formed in March 2020 to track reports of violence against Asian Americans and Pacific Islanders “in response to the alarming escalation in xenophobia and bigotry resulting from the COVID-19 pandemic.” While the organization has stated that “few details about these shootings have been released, including whether or not they were motivated by hate,” since last March, it has received nearly 3,800 reports of anti-Asian hate from across the nation.

Below, what you need to know about this most recent act of violence and how you can continue to support Asians, Asian Americans, and the AAPI community.

What happened on March 16

Per the Times, the first shooting took place at Young’s Asian Massage and was reported to police around 5 p.m. Four people were killed and a Hispanic man was injured. Less than an hour later, officers went to Gold Spa, about 30 miles away, to respond to a robbery and found three more women dead with gunshot wounds. At the same time officers were at Gold Spa, Atlanta police said they received a report about Aromatherapy Spa across the street. There, they found another woman who had been shot. An official from the South Korean Consulate in Atlanta confirmed to the Times that four of the people were Korean.

Robert Aaron Long, a 21-year-old white man, was taken into custody and charged with eight counts of murder in the Tuesday attacks.

A spokesman for the Atlanta field office also told the Times that the FBI is assisting in the investigation. According to CNN, police said, citing video evidence, “it is extremely likely” that the same person was responsible for all three shootings.

According to the Times, the four people found at Young’s Asian Massage have been identified as Delaina Ashley Yaun, 33; Paul Andre Michels, 54; Xiaojie Tan, 49; and Daoyou Feng, 44. On Friday, the Fulton County Medical Examiner’s Office released the identities of four more victims: Soon C. Park, 74; Hyun J. Grant, 51; Suncha Kim, 69; and Yong A. Yue, 63. Elcias R. Hernandez-Ortiz, 30, an immigrant from Guatemala, was shot and injured during the shooting at Young’s Asian Massage.

A longtime customer told the Times that Tan, the owner of Young’s Asian Massage, was “just the sweetest, kindest, most giving person.” Her daughter, Jami Webb, said about her mom: “She did everything for me and for the family. She provided everything. She worked every day, 12 hours a day, so that me and our family would have a better life.” Feng was one of Tan’s employees.

Yaun had gone to Young’s Asian Massage on Tuesday to get a massage on a date with her husband, who survived the attack. A relative described Yaun as “the rock for this family” and “a good, godly woman.” Michels was a businessman and a U.S. Army veteran. His brother described him as a “very hard-working, loving man.”

Grant’s son Randy Park described his mother, who worked at Gold Spa, on a GoFundMe as “a single mother who dedicated her whole life to providing for my brother and I.” He wrote, “She was one of my best friends and the strongest influence on who we are today. Losing her has put a new lens on my eyes on the amount of hate that exists in our world.” His brother, Eric Park, told the Times that his mother liked Korean dramas and making bowls of kimchi chigae, and that as long as the three of them were together, she was “pretty happy.” He told the outlet, “All I can think about is her. Looking at the news just gets me mad. That deputy saying the shooter had a bad day—how is that a bad day? To me it’s a hate crime no matter how it looked.”

My heart is broken tonight after the tragic violence in Atlanta that took eight lives. Once again we see that hate is deadly. Praying for the families of the victims and for peace for the community.

Several Asian American members of Congress also responded to the attack. Rep. Grace Meng wrote on Twitter: “My heart breaks for those we lost in these senseless shootings. And this is all the more painful because AAPIs have spent the last year telling you that our communities were in danger. We cannot move forward — we cannot heal — until our country reckons with & stops AAPI hate.”

My heart breaks for those we lost in these senseless shootings. And this is all the more painful because AAPIs have spent the last year telling you that our communities were in danger. We cannot move forward — we cannot heal — until our country reckons with & stops AAPI hate.

My heart breaks to see this tragic news. AAPI Americans are once again being targeted, harassed, attacked, and killed in Georgia and communities across America.

We must do everything we can to end this violence while organizing together against hate, gun violence, and bigotry. https://t.co/Oy4AYkR08L

I’m heartbroken to hear about this tragedy. The AAPI community across the country is frightened by these acts of violence. We have to strengthen our resolve and act against such blind hatred. Tonight we stand in solidarity with victims and their families. #StopAsianHate https://t.co/r34B3xnUnQ

Stop AAPI Hate released a statement on Tuesday, saying: “The reported shootings of multiple Asian American women today in Atlanta is an unspeakable tragedy — for the families of the victims first and foremost, but also for the Asian American community, which has been reeling from high levels of racist attacks over the course of the past year.”

.@StopAAPIHate statement: “This latest attack will only exacerbate the fear and pain that the Asian American community continues to endure.” Full statement below: pic.twitter.com/yqmj2ru2co

Former President Barack Obama also tweeted: “Although the shooter’s motive is not yet clear, the identity of the victims underscores an alarming rise in anti-Asian violence that must end.” He continued, “Yesterday’s shootings are another tragic reminder that we have far more work to do to put in place commonsense gun safety laws and root out the pervasive patterns of hatred and violence in our society.”

Yesterday's shootings are another tragic reminder that we have far more work to do to put in place commonsense gun safety laws and root out the pervasive patterns of hatred and violence in our society.

Michelle and I pray for the victims, their families, everyone grieving these needless and devastating killings—and we urge meaningful action that will save lives.

President Joe Biden addressed the shootings on Wednesday and said he has spoken with the attorney general and the FBI director about the attack. He said, “Whatever the motivation here, I know Asian Americans, they are very concerned, because as you know I have been speaking about the brutality against Asian Americans, and it’s troubling.”

Jill and I are keeping everyone impacted by the shootings in Atlanta in our prayers. We don’t yet know the motive, but what we do know is that the Asian-American community is feeling enormous pain tonight. The recent attacks against the community are un-American. They must stop.

Vice President Kamala Harris also responded, saying in part, “We don’t yet know—we’re not yet clear—about the motive. But I do want to say to our Asian American community that we stand with you and understand how this has frightened and shocked and outraged all people but knowing the increasing level of hate crime against our Asian American brothers and sisters. We also want to speak out in solidarity with them and acknowledge that none of us should ever be silent in the face of any form of hate.”

Doug and I grieve with the families and communities of those whose lives were horrifically taken last night. Violence is never acceptable and has no place in our country. While the motive is unknown, @POTUS and I want the Asian American community to know we stand with you.

Biden and Harris were also set to meet with Asian American leaders in Atlanta on Friday afternoon.

How to support Asians, Asian Americans, and the AAPI community

If you’re looking for places to donate, there are a number of organizations that work to combat anti-Asian violence and provide ongoing support to local AAPI communities:

The Asian American Advocacy Fund works to “advocate for the civil and human rights of Asian Americans, Pacific Islanders, and Native Hawaiians in Georgia.”

Red Canary Song, a grassroots collective of Asian and migrant sex workers that “centers basebuilding with migrant workers through a labor rights framework and mutual aid.”

The National Asian Pacific American Women’s Forum works to “build a movement for social, political, and structural change for Asian American and Pacific Islander (AAPI) women and girls,” including fighting for economic and racial justice.

AAPI Women Lead “aims to strengthen the progressive political and social platforms of Asian and Pacific Islander communities in the US through the leadership of self-identified AAPI women and girls” with the goal of ending violence within and against AAPI communities.

The Asian Mental Health Collective works to “to normalize and de-stigmatize mental health within the Asian community” by making mental health support easily available and accessible.

You can also donate to Stop AAPI Hate here, and find even more organizations here, via New York magazine.

Continue to speak out against anti-Asian violence, hate, and harassment, both on social media and within your own social circles. The organization Hollaback! has also partnered with Asian Americans Advancing Justice to provide free bystander intervention training and conflict de-escalation training to stop anti-Asian and xenophobic harassment. You can sign up here.

Here’s How You Can Support the Asian Community Right Now
The Importance of Recognizing Community, Embracing Identity and Speaking up Amid the Rise in Anti-Asian Racism
Sandra Oh Delivers Powerful Speech at Stop Asian Hate Rally: “I’m Proud to Be Asian”