Let's Stop With All the Sorrys 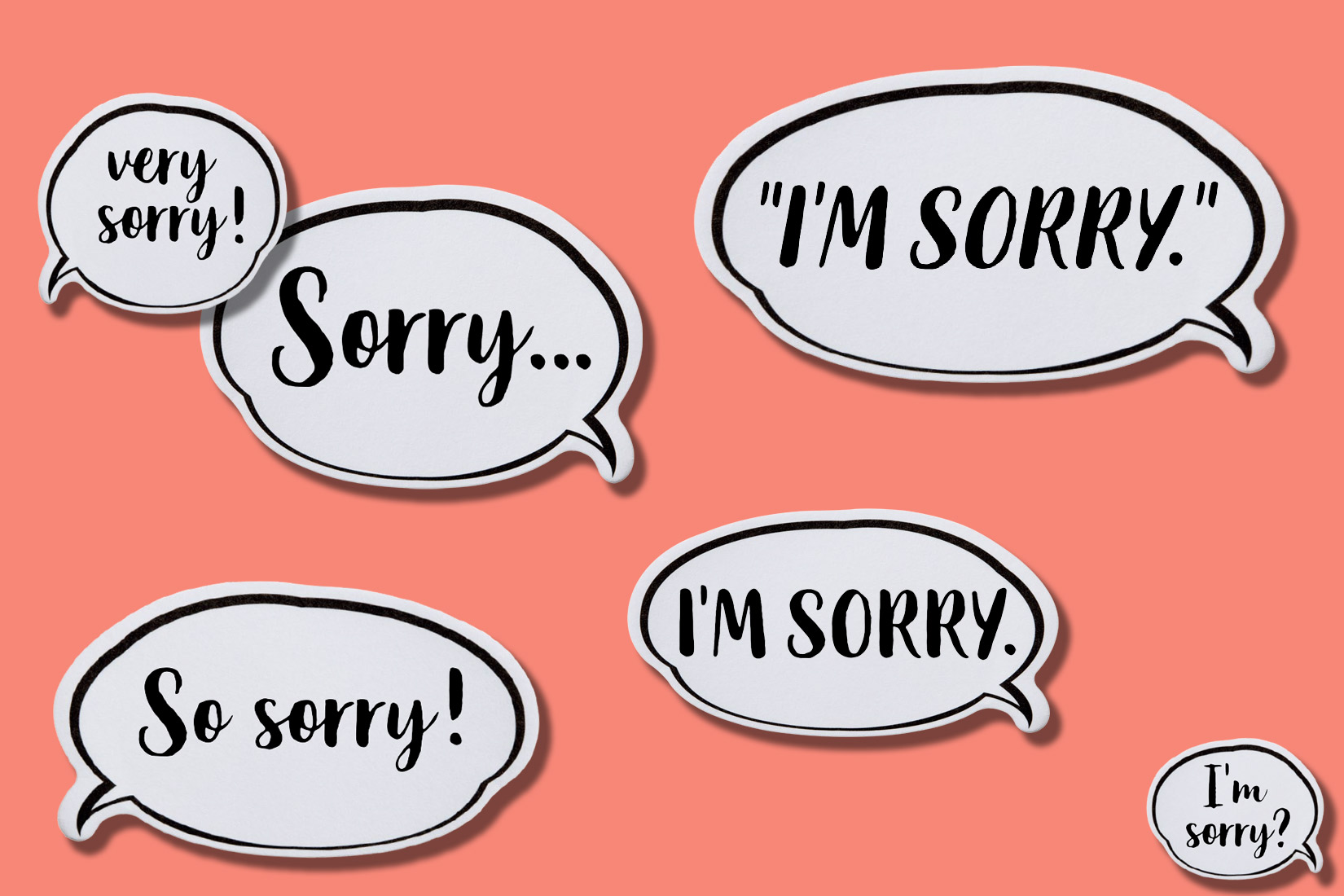 Let’s play a game: Open your laptop or grab your phone, pull up your email and search your sent box for “sorry.” How many times does it come up? My sent folder, in the past month alone, has 161 sorrys: “Sorry this note’s slow,” “sorry for sending too many notes,” “sorry for jumping the gun” (huh?) and, my personal nervous reflex, “sorry for bothering you!” Needless to say, there’s also a mass of “justs,” “maybes,” “onlys” and “kindas.” I’m only trying to be agreeable—actually, that’s not entirely true. Society rewards women, socially, professionally and financially, for playing nice with words— the “could we” and “just” and Co. we use to qualify our requests. “Only quickly checking in” (for the third consecutive time) lets me shamelessly ask again without worrying that I’m going to offend a source. “I’m no expert but” allows me to express a strong opinion whether I could write an encyclopedia on the topic or not. “Thanks and sorry again!!!”—a pre-emptive gesture of gratitude plus an overenthusiastic closer—gets me the answer before my 5 p.m. deadline. But, I wonder, what is all this apologizing doing to my state of mind?

“You’re devaluing whatever you’re about to bring forward,” cautions Vancouver business and leadership coach Jody Kennett. “It automatically frames you as inferior,” adds Sarah Vermunt, author of Career Rookie. “You’re giving your power away.” Well, geez, sorry (sorry!), I’ll stop then. But it’s not that easy. Even though women today are more empowered than ever and pop culture tells us (over and over again) that apologies et al. are for suckers—Beyoncé sang “Sorry, I ain’t sorry”; an Amy Schumer skit skewered a panel of professional women overapologizing for their expertise; and the anti-apology #sorrynotsorry still clogs my Instagram feed—it feels all too natural to sometimes default to doormat status.

“It’s a domino effect of [women’s] internalized humbleness,” says Maja Jovanovic, a professor of sociology at McMaster University in Hamilton, Ont., and author of Hey Ladies, Stop Apologizing. “From an early age, we’ve been conditioned to be highly attuned to the feelings of others at all times.” Although studies have found that both men and women apologize equally for things that necessitate it—spilling someone’s almond-milk latte, let’s say—women are more likely to fall into the habit of using the word to downplay ourselves and our requests and achievements. “It’s uncomfortable for us, still, to be perceived as overbearing,” says Jovanovic. This attitude, she adds, plays into and reinforces another historically disproportionately female phenomenon: imposter syndrome.

Even our punctuation isn’t immune. A period plopped at the end of a text message, found a 2016 study from New York’s Binghamton University, conveys “insincerity”—that is, it comes across as curt, stuffy and even bitchy. To seem nicer, you might add a smiley face— women tend to use emojis more than men do—although 2017 research from the University of Amsterdam (in conjunction with two other schools) found that an emoticon sent in work emails reduces the sender’s perceived competence [eye- roll emoji here]. Or you might overcompensate with some friendly exclamation marks to convey enthusiasm, although be warned that “punctuation inflation”—when one exclamation mark won’t do so you add a few more—can be perceived as unprofessional. I know a no-win situation when I see one, and when we’re constantly policing women’s language while giving men a free pass, maybe the problem isn’t ours. It’s worse still that I’m expected to pick myself apart by scanning the style and tone of every single email or text to conform to someone else’s preferences. (It’s hard to imagine men performing this brand of digital emotional labour, and it’s also true that I don’t expect it of them.)

“You don’t have to change who you are,” agrees Kennett, “but you do need to have confidence in your worth and value.” Adds Tami Reiss, co-creator of Just Not Sorry, a Chrome plug-in that flags this undermining language in emails: “If saying sorry is really your method to get ahead, we want to advocate for you. But if you want to test out how changing your word choices changes how people see you, we can get you there.” I was intrigued, so I downloaded it. I already know I’m guilty; seeing them collectively underlined in judgmental red was a stark wake-up call of the less-than-stellar word choices I didn’t even know I was making. Since then, I’ve become more mindful when I’m writing emails—vetoing 99 percent of my “justs” and “onlys” and skipping the assumption that I’m always bugging or bothering. It means that if I’m not three-exclamation-mark happy, I don’t have to fake it. But if I’m legit feeling so fabulous and confident, I’ll be using those exclamation marks without any shame at all.

According to career coach Sarah Vermunt, this might feel silly, but it lets you hear your tone. Superfluous qualifiers will stand out, just begging to be deleted. “‘Only,’ ‘but’ and ‘just’ can almost always go,” she says.

When the CEO is late to a meeting, she’s never sorry. “She’ll thank you for waiting— implicitly recognizing that you waited for her,” says Tami Reiss, co-creator of Just Not Sorry. Almost every sorry you type can be swapped for a thanks (for waiting, reading, considering) that doesn’t forfeit your power.

Hear someone struggling with diminutive language? Make like the women of the Obama administration who used the “amplification” concept—that is, they would jump in and reinforce another woman’s point if it was being minimized.