The Nasty Gal and Girlboss founder gets real about career and beauty. 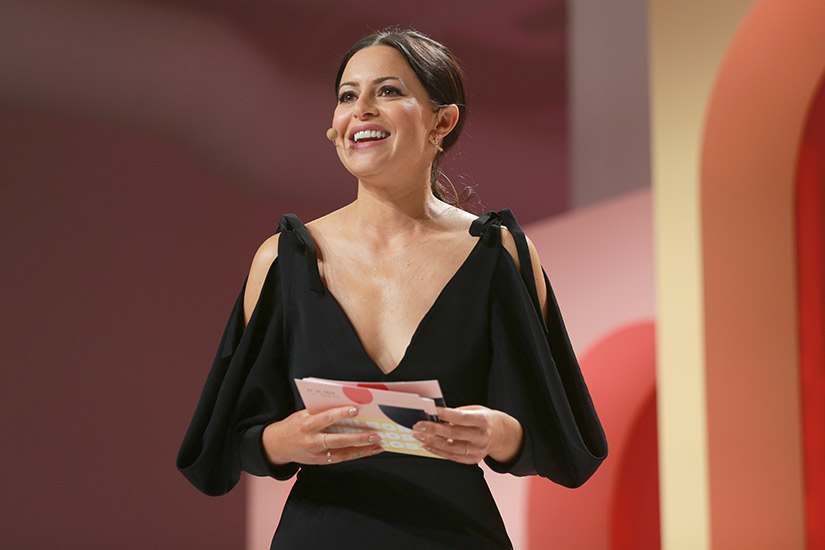 How does one survive a busy day of press, events and international travel? Caffeine, obviously—which is why someone surreptitiously plops down a venti iced coffee next to Girlboss CEO Sophia Amoruso in the middle of our chat. “I’m so American,” she laughs, when she notices the oversized cup.

We get it. Even just thinking about Amoruso’s busy schedule has us wanting our own extra-large coffee. You’re probably familiar with at least some of Amoruso’s story, in part because she’s been so open about it: she started an online vintage-clothing shop on eBay at just 22, which soon exploded into her own e-tailer site Nasty Gal. Success came with millions of social media followers, book deals and even a Netflix show, Girlboss, based on her autobiography. But in 2015, Amoruso stepped down as CEO from her company, which filed for bankruptcy the year later. Those changes eventually led the American businesswoman to where she is now: the founder and CEO of Girlboss Media, a site dedicated to building a community of millennial women.

When we meet up with her, Amoruso is in Toronto just for the day, to help launch Shoppers Drug Mart’s Be Bold with Beauty campaign, an initiative meant to encourage women to experiment with their looks and step out of their comfort zone. And if there’s anyone who knows about either of those things, it’s Amoruso. We sat down with the entrepreneur to talk about failure, beauty and her career.

On experimenting with her look

“From the time I could wear mascara, it was something that allowed me to explore who I am. My skincare and beauty routine has evolved as my life has. It’s changed significantly, it’s actually hard to look at. There’s been so many looks, and they’ve all been pretty bold. I’m learning the art of subtlety now in my mid-30s. I spent the last decade of my career doing the beyond bold look, so it’s a nice departure now, but being the head of a fashion brand where I feel like I need to look edgy all the time.”

On the empowering side to fashion and beauty

“Being bold isn’t necessarily always about wearing the boldest look—it’s about bringing your bold out of your attitude. To some people, caring about your look can seem superficial. But it’s unconventional to use it in a way that empowers you. Historically, the stereotype is that women cover or hide themselves with beauty, but I think it’s quite the opposite for most of us. We use it to bring out parts of ourselves that we wouldn’t otherwise. If it brings you more confidence, if it makes you speak up just a little bit more because you have red lipstick on, do it.”

On changing how we view failure

“Everybody’s experiencing our own degrees of failure, but most of us are doing it in silence. It can be a very lonely experience, but the fact is that it’s the most normal thing since the beginning of history. It’s through hardship that we learn who we are. I’ve grown more in the last few years during the most difficult times than I did during the great times. ‘Failure’ feels very final—and nothing is final. If we reframe that, it’s actually just an opportunity to start something else. Failure is more important than you think it is.”

“I do [wish I had a mentor], but the fact is that no one’s going to drop from the heavens and make things easier for you. Today, there are so many more female entrepreneurs building digital brands and I wish I was part of that community when I was starting out because there was really no one to talk to. Mentorship is very hyped up and should be a lot broader of an idea. People can find mentorship individually, and it doesn’t always have to be from the top down—it can be peer mentorship, or people who have less experience than you but are wise in other ways.”