Issa Rae on Sidestepping Gatekeepers And Doing The Most

The actress, writer and producer headlines Afrochic 4D in Toronto on August 10. 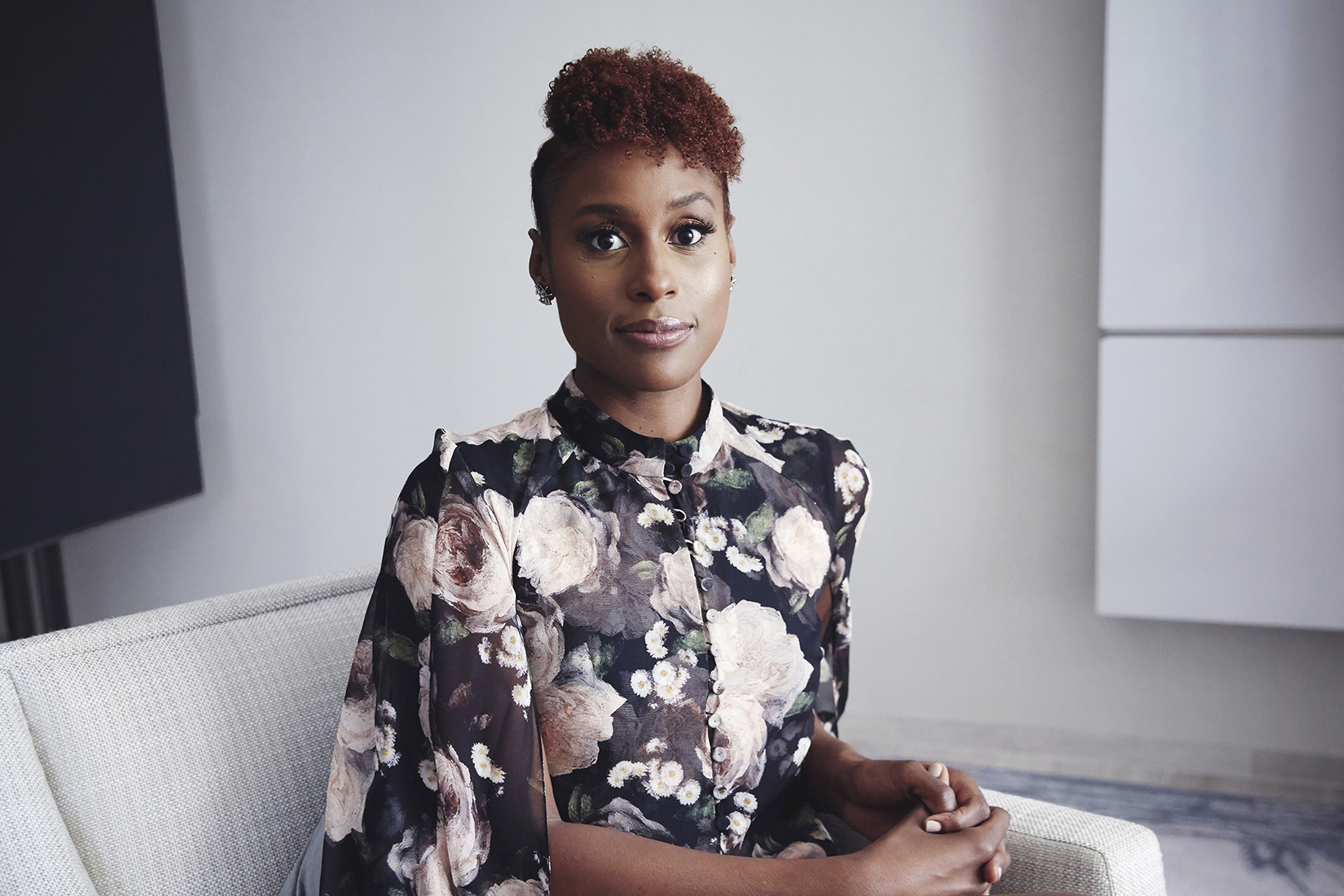 Rae’s dedication to representing Black culture the way she sees, and lives, it has also graced the big screen (Little, The Hate U Give). And now, she’s taken the reins as co-executive producer of A Black Lady Sketch Show on HBO; the first sketch show written, directed and starring black women.

In partnership with Bumble, whose AfroChic programming is focused on empowering women, festival-goers will have the opportunity to hear from Rae on technology, entertainment and digital creation. She will also be offering five lucky Bumble Bizz users one-on-one advice about turning one’s passion into a career. Bumble Bizz users are encouraged to apply to speak to Rae directly on the social app.

Ahead of AfroChic, we spoke to Rae about having her hands in multiple projects, how she keeps barreling forward and the importance of pressing pause.

What drew you to say yes to headlining AfroChic this year? What are you most excited to experience or see?

“I’ve never had a quote-unquote Black experience in Toronto. So that fact that this [event] is really centered around mentorship in a way, and being able to share my story with other people who could follow in my footsteps or do better — I relish in that kind of opportunity.”

Female empowerment is a big theme for the festival. What makes you feel most empowered?

“Working with capable people. I work with a lot of smart, ambitious, driven people. The majority of people I work with are definitely women, but I can’t discount the men in my life too. We’re all about female empowerment and that includes the men. We value one another and there’s a lot of respect. I would not be anywhere without the people that I work with.”

There’s also a major tech focus at AfroChic. How would you define the importance the digital world holds to you and what you do?

“It’s everything to me. That’s basically what launched my career. It’s what made me be able to sidestep the gatekeepers. It’s where I’m able to get the most honest feedback from all of my work, whether I want it or not. It’s also an opportunity to showcase the next generation of talent, and I don’t discount that: I use various platforms (my YouTube channel is still active) to continue to engage with content creators, as well as to continue to find talent. It really just drives my entire business.”

Your career is skyrocketing. What motivates you professionally to keep evolving and growing?

“Doing the most that I can do. Doing what I want to do. Doing what I’m passionate about. I’m also low-key competitive. It’s friendly competition for sure, but I’m definitely driven by competition with myself and those who doubt. Like, if you discount me, underestimate me, or if you try to outmanoeuvre me, there’s something about that where I’m just like, ‘Oh, okay. You think I’m playin’.’ I credit that to the Capricorn in me.”

With all your amazing wins, I’m sure you also have to deal with your fair share of criticism. How do you deal with those types of challenges? So many people can lose themselves in negative thinking.

“I’m not going to sit here and say it doesn’t bother me; it sometimes does. When something is incorrect, that’s when it’s hard not to chime in. But you have to have a thick skin and not take it personally. That’s what I have to tell myself because I was once on the other side of being vocally critical. I was part of the [negative] karma, especially online. I was shit-talking online, and now I’m in a position where people can shit talk about me. And when I was doing that, I wasn’t happy with where I was. I wasn’t happy with my career. So I tell myself to keep it pushin’, because really in the grand scheme of things, it’s not that serious.”

What’s the best career or life advice you’ve ever heard and who said it to you?

“There was a time where I was just feeling really down on myself and was venting to a colleague. We were sitting at dinner, and I was just like, ‘Ugh, this is happening, and I don’t know if I want to speak up about it.’ It was a bit jarring, but she said, ‘Girl, don’t be soft. You’re over here complaining and shit. It’s not that serious. Don’t be soft.’ I was like, ‘You’re right!’ Why am I over here feeling like marshmallow woman — the Michelin Man — being all extra and vulnerable? It’s not that serious, toughen up and keep it pushin’ was basically it.”

You have your hand in so many different projects. How do you find balance with everything on your mounting schedule?

“I trust a lot of it and, again, the people around me are so central. For me, it’s also about designating moments to be creative. You can get so bogged down in the business aspect of it that you can lose sight of that, and that’s definitely happened to me before. I was so focused on trying to make money and staying afloat, or focused on taking all the opportunities that came my way, that I hadn’t created anything new in a year.

“Creating new stuff — continuously keeping my creative juices flowing — is important to me. So I’ve been able to maintain that balance with a routine. Yes, I’m in the writers’ room every day, but I’m up at 4:30 a.m. From 4:30 a.m. to 5:30 a.m. I’m exercising. I’m in the office by 7 a.m., and for three hours I’m working and making sure I’m on top of everything before the writer’s room starts at 10 a.m. Then I have the rest of the day to be creative for Insecure.”

A lot of people struggle to deal with feelings of failure and disappointment. How do you cope and move on?

“I think Black people are given so few chances, so sometimes it does feel like what you’re doing has so much weight, and that one wrong move can be the end of the world. That you’re not going to be given a second chance. But when you have confident energy, it will come back to you. That’s how you keep it pushin’.”

You’re working with Robin Thede on her Black Lady Sketch Show, a project that’s breaking new ground for Black female comedians, not to mention it has so many incredible star-studded cameos, including Angela Bassett, Laverne Cox and Patti Labelle! In your own words, why is a sketch comedy show like this so necessary?

“It’s reflecting the voices of different people. It’s shining a light on so many comedy writers, so many amazing actresses who just never got the chance to be funny, who never got the chance to showcase their range because they’ve been overlooked or underestimated. And it just comes from the brilliant mind of a woman who has been thinking about this for such a long time, and who comes from this world and has witnessed that.”

It sounded like you really urged Robin to pitch the project at HBO.

“Definitely. I just thought it was such a great idea with such potential, and I was just so happy to hear about it and see what she was going to do with it. The vision for it was so grand.”

You’re also back in the writers’ room for Insecure season 4, which is returning to HBO in 2020. You worked back-to-back on a yearly release schedule for seasons 1 to 3. How important for you was the substantial break before starting on season 4? What did that time allow for?

“It was the best thing we’ve ever done because I just felt so energized. I had fatigue after last season. I’ve been in the writer’s room working on this show now for four and a half years, (probably five years including the time it wasn’t on the air), so I needed a break — I needed to do other things. And I’m so excited for the stories we’re telling [this season]. I feel like I’ve gone out and experienced the world and am looking at the series with fresh eyes.”

On August 10 at Afrochic 4D in Toronto, ELLE Canada editor-in-chief Vanessa Craft will be holding a fireside chat with Issa Rae about business, creativity and the power of technology. Get your tickets now.