Is marijuana the new rosé? 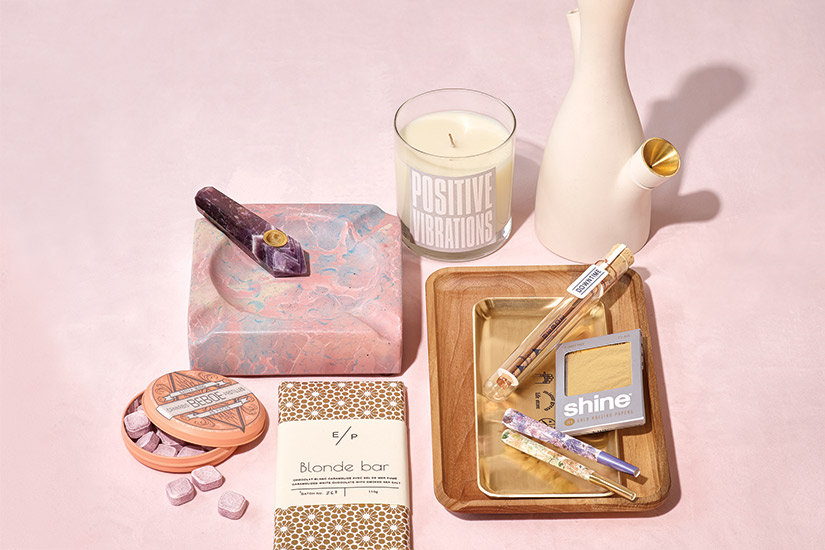 “I love the gummy bears—it’s giggles, not that spacey stoner vibe,” says Louise (not her real name), strolling through her Kelly Wearstler-style living room, its midnight-blue velvet sofas offset by python-print wallpaper. “When I’m going out for the night, I slip them in my clutch. No telltale weed smell, and they’re easy to carry. Best of all, I don’t drink as much if I have them on me.” Never a big pot smoker, Louise, married and a mother of two, now routinely opens the front door of her multi-million-dollar Toronto home to sign for parcels packed with THC-laced treats from cankush.com, a Vancouver retailer that also ships goodies like Hazelnut Crunch “cannabars,” preloaded Pink Mink vapes and sachets of high-grade marijuana, pre-rolled for your convenience.

With prohibition now over and the stigma (nearly) jettisoned, pot is on its way to becoming the new rosé. The number of Canadian women lighting up is on the rise—now one in 10 of us indulge, according to Statistics Canada—so the image of the dozy couch potato is being replaced by images of women nibbling elegant edibles like weed-infused organic-dark-chocolate truffles. Today’s au courant aficionada can roll joints with 24-karat-gold Shine papers, inhale chilled smoke from her high-tech Aura water pipe, store her stash in a cherry-wood Cannador (sister to the classic cigar humi­dor), click through lady-smoking websites (sweetflag.club) and enjoy heady sessions at her neighbourhood ganja-friendly yoga studio. Afterwards, she can pop by Tokyo Smoke—part sophisto coffee shop, part lifestyle brand—for an espresso and to peruse merchandise like concrete ashtrays and rose-gold grinders.

It’s the biggest gold rush since the tech explosion: Profits are estimated to reach more than $20 billion a year in Canada now that pot is legalized. It’s no surprise that savvy entre­preneurs are queuing up to stake claims—or that they’re targeting women with lady-friendly designs. “Women hold a lot of power as consumers, and brands want to reach a group beyond existing users,” says Anja Charbonneau, editor-in-chief of Broccoli, a magazine, launched in 2017, that looks at “cannabis from an art, culture and fashion perspective.” “Women are the ones who are going to normalize cannabis use simply by being open about it,” she says.

With designers from Alexander Wang to Jeremy Scott to Mara Hoffman adorning collections with pot prints, Charbonneau will have plenty to cover. Today’s fash­iony smokers are snapping up weed-inspired clutches and bijoux by Jacquie Aiche and thousand-dollar grinder pendants from Vetements. Posh pot varietals now have high-fashion monikers reflecting their characteristics—there’s Gucci (a “giggles and creativity blend”), Louis Vuitton (“elegant and luxurious”) and Chanel No. 5 (a fittingly “rare” strain). Aimed at the style crowd, the Pax vape is stocked by cult boutique Opening Ceremony.

For true insider chic, one needn’t look much further than the refined new offerings from Beboe. “We wanted something that would attract that more sophisticated customer we had experience with in the fashion world—something lower dosed, of the highest quality and packaged in a way that would rival a luxury brand,” explains Beboe co-founder Clement Kwan, who was an executive for Dolce & Gabbana, Theory and YOOX before taking his stylish expertise to the budding realm of luxury marijuana.

Beboe, which debuted with a tin of pastilles and a rose-gold vape, is now being expanded to include a second vaporizer, pre-rolled joints, a tincture and chocolates. Kwan is quick to emphasize that all of the products “work within social settings such as cocktail and dinner parties”: grass with class, the chic new hostess gift. Or you can split the difference by showing up with a bottle of Rebel Coast Sauvignon Blanc—a citrusy California white launched in January 2018 that’s infused with THC instead of alcohol. All buzz, no hangover? Cheers to that.