How millennial pink has taken over our lives 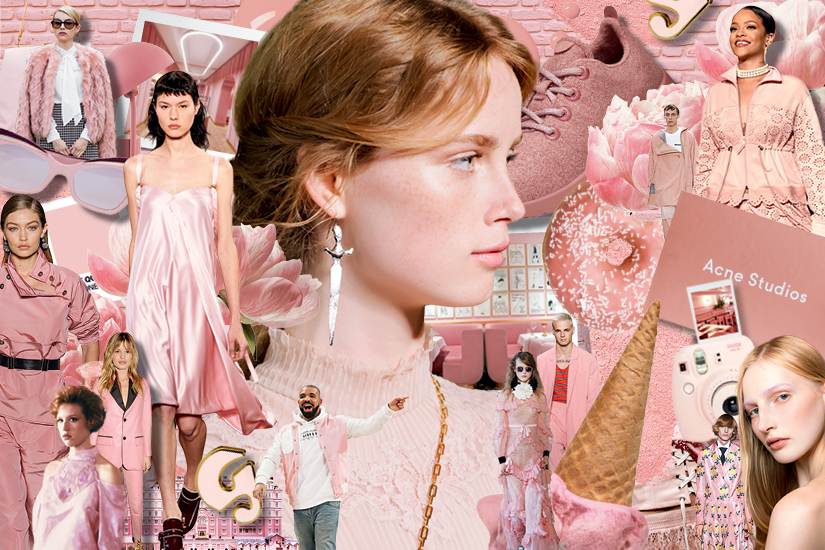 You can’t miss it; it’s everywhere. Soft pink, a colour once confined to nurseries and Barbie’s dream house, has invaded our closets, our interiors, our literature and our Instagram feeds. Coined “millennial pink” by New York Magazine – a nod to the generation that has latched onto the colour – the frothy shade seems to have tapped into our collective subconscious and, along the way, shed its prissy reputation. Pink is all grown up now. It’s high fashion, even subversive. (See: the Women’s March knitted Pussyhats.) And, dare we say, cool?

Millennial pink as a colour is difficult to describe. It’s not so much a particular shade but a spectrum – from Mansur Gavriel’s salmon branding to beauty brand Glossier’s more pastel packaging to Acne Studios’ rose-coloured shopping bags. “It is toned down and slightly darker than pink pink,” says Carolyn Kane, a colour theory scholar and assistant professor at Toronto’s Ryerson University’s School of Professional Communication, who notes that this shade appeals to a generation that embraces gender and sexual fluidity. “It has a dark coolness to it that is more androgynous as well as the warmth and comfort of traditional pink.”

Of course, this colour isn’t new. (Just ask Andie in Pretty in Pink.) We can track the shade’s comeback to the fall/winter 2012 collections. Jil Sander inhabited feminine prettiness with a palette of dusty rose and blush pink, Céline was all about dirty-flamingo cool-girl minimalism (the bird made an appearance in the label’s ads) and Rei Kawakubo camouflaged the female form with muted bubble-gum-pink pop-art-inspired sculptural coats at Comme des Garçons.

Millennial pink’s commercial popularity was fast-tracked by Pantone in 2016, when it announced the near-blush Rose Quartz as Color of the Year, an honour it shared with Serenity, its pale-blue counterpart. Pantone attributed its unprecedented selection of two colours for the grand title to mindfulness, the balance between warm and cool and a reaction to the blurring of gender in many parts of the world. Neither colour was meant to represent gender in a traditional sense, though, and even the names reflect that. Rose Quartz, says Leatrice Eiseman, executive director of the Pantone Color Institute, “implies more strength than something that’s ethereal and airy-fairy and wispy and going to float away.”

Pantone’s colour of the year for 2016 was Rose Quartz.

The badass side of the stereotypically girlie-girl colour is apparent in Rihanna’s spring/summer 2017 Fenty collection for Puma. The singer turned designer looked to Marie Antoinette for inspiration for her corseted and lace collection – except in Rihanna’s world, the infamous French queen is more likely to crush it at a SoulCycle class than sedately stroll the gardens of Versailles.

The cotton-candy hue has invaded menswear too. Pink has graduated from its 2000s frat-boy popped-collar connotations to the world of high fashion. Perhaps the best example is Alessandro Michele’s gender-bending collections for Gucci, including the not-quite-Pepto-pink unisex suit worn by both Georgia May Jagger and the designer himself. And let’s not forget Drake’s soft-pink staples: his blush puffer coat, the pink-and-white varsity jacket that he wore courtside at an NBA All-Star game in Toronto and his “Hotline Bling” video, staged in a pale-pink studio. “Millennial men are not as intimidated by the colour [as previous generations were],” says Eiseman. “Seeing a beautiful pink puffy jacket, which would have been reserved for something very romantic, now has a feeling of resilience attached to it.”

Drake courtside in a pink varsity jacket. Image by: Getty

The millennial-pink fashion phenomenon can also be linked to the pink trend in Scandinavian interior design. As early as 2014, popular Scandinavian furniture brands such as Hay, Muuto and Normann Copenhagen began releasing collections in hues of pink ranging from pale salmon to peach. “If you go to Copenhagen, everything is pale pink; it’s part of the culture,” says Pum Lefebure, co-founder and chief creative officer of Design Army in Washington, D.C.

The influence has since trickled across the globe. (Even Kendall Jenner painted her Hollywood Hills mansion’s living room “Baker-Miller Pink,” a slightly darker version.) Consider the recent phenomenon of pink restaurant interiors, such as the Gallery at Sketch in London, England, designed by India Mahdavi, the oh-so-Instagrammable art-deco walls at Toronto’s Oretta or the row of pink bar stools and booths at Vancouver’s Kissa Tanto.

The pink chairs at Vancouver’s Kissa Tanto. Image by: instagram.com/kissatanto

As a graphic designer, Lefebure sees pale pink as a hue that can stand on its own or mix with other colours. “That’s why in design, pink is used so much in packaging and branding,” she says. “It pairs well with something like bright Yves Klein blue or red. It becomes almost a neutral.”

The shade appears to have an endless ability to multi-task. “It’s a colour that works with every skin tone,” says Lefebure. “It has complexity: In the daytime, it looks like pink but not really daring; at night, however, it makes your skin glow.” In other words, it’s here for the long haul.