How Cynthia Loyst Overcame Anxiety and Stepped into the Spotlight 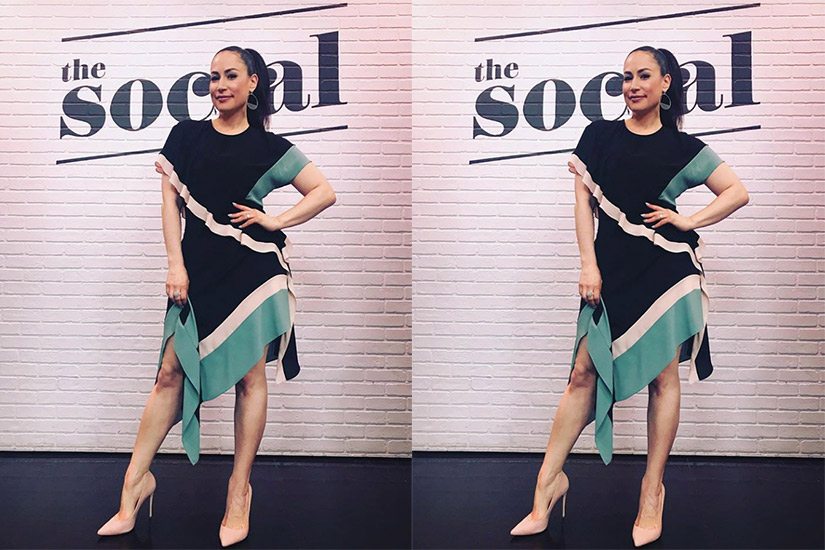 Over the past five years as a cohost on the talk show The Social, I have recorded backstage messages with Meghan Trainor, air-kissed Miss Piggy and taken cozy selfies with Ryan Reynolds. (Yep, he’s as fresh and delicious-smelling as you’d imagine.) If you didn’t know me, you’d probably guess I was a natural-born extrovert who’d always dreamed of life in the public eye. But it took many years (and tears) to get here.

Growing up, I wanted to work in TV, but I definitely wasn’t trying to become the Canadian Barbara Walters. After graduating with a degree in film and television, I became a producer for an award-winning documentary series about sexuality, a position I kept for years, happily unseen on the other side of the camera. Then, in 2009, the bottom fell out of the economy. Suddenly both the series and the channel I was working on were cancelled. I knew my days were numbered if I couldn’t make myself useful at minimal expense to the company. Around the same time, an executive had been nudging me to host and produce a show about sex. I had always waved him off—but you know what they say about desperate times.

A few months later, I found myself sitting in a puffy red chair with a camera pointed at my face. I was sweaty and jittery and could hardly string a sentence together. Every time the little green light turned on, I felt like I’d either start weeping or vomit. I know I’m not the only person who has found themselves in a dream job and been terrified of choking or simply wondered “What the hell am I doing here?!” But I’ve learned that some of the most rewarding experiences in our professional lives are born of pursuing things we had to work hard to get good at. It was a long, slow process, but here’s how I learned to break free of my fear of failure.

Still dying of embarrassment. Thanks for being such a good sport @prideofgypsies.

During the first few months of my new gig, I spent most of my free time searching online for anything that could help me learn to be more comfortable on-air. Eventually I stumbled across improv classes. I didn’t know it at the time, but improv is recommended for people with social-anxiety disorders. Even companies like Google and PepsiCo are starting to incorporate improv exercises into corporate training. I hoped these classes would help me not only become faster on my feet but also stop taking everything so seriously. After all, TV was supposed to be fun.

During class, we would throw invisible balls to each other and crawl around like animals. At first, it felt insane. But then it became freeing. One of my favourite exercises was called “Yes, and….” Two of us would face each other and start with a statement as simple as “The sky is blue.” The other person would respond with “Yes, and…” and we’d continue the story back and forth. This teaches the anxious person who worries about saying something stupid that every statement is worth building on. And it was key to helping me learn to roll with it when something doesn’t go as planned, which can happen in any job, not just TV.

That confidence has a ripple effect, says Gary Hirsch, a co-founder of On Your Feet: Improvisation for Business, based in Portland, Ore. “When people learn to face uncertainty with confidence, you get better service, products and systems.” Not up for improv? Try some deep breathing to counteract the physiological effects of anxiety. Inhale through the nose for four counts, hold for two seconds and then exhale slowly.

Reframe How You Feel

I am probably Tim Burton’s biggest fan, so when I found myself interviewing him early on in my career, I felt about as awkward as Johnny Depp in Edward Scissorhands. I stuttered out a question—something about whether he thought monster movies reflected the current political climate—and held my breath. He loved it. Instantly my nerves mutated into giddiness and my heart pounded excitedly. While I’d felt terrified two seconds before, suddenly the exact same feeling was making me elated. All it took was a new mindset. There’s research behind this strategy. A 2014 study led by Alison Wood Brooks of Harvard Business School found that when people reframe their thinking about a situation—e.g., saying “I’m excited” instead of “I’m so nervous”—or give themselves messages of encouragement, they end up feeling more positive and perform better.

I often had situations where my mind told me I didn’t deserve to be there. Nova Browning Rutherford, a Toronto-based life coach, gave me a technique to cope with this: Jot down a list of your successes and the names of people who believe in you, and read it aloud regularly. Or how about this: Instead of trying to avoid imposter syndrome, why not “lean in” to it? When you embrace (a little) the worry that you’re never going to be quite good enough, it can give you an edge by keeping you motivated.

When I started hosting, I promised myself that if it still wasn’t any fun after a year, I would pursue another role. Thankfully, something clicked after about six months. When I found myself exchanging quips with Ryan Gosling on a red carpet, I realized I was finally enjoying my job. But you also have to know when to walk away—even if it means saying goodbye to a role that looks perfect on paper. Had my on-camera career continually left my stomach in knots, I’d have gone back to producing.

Browning Rutherford suggests doing a gut check if you feel unsettled at work. Ask yourself: “Is there anything I like about this job? Do I not like it or am I just afraid of it? Is there room for it to grow into something I like better? Can I take extra courses to help me feel more confident?” Then set three-, six- or nine-month goals and assess how things are unfolding. If there’s no change, mentally set a “drop-dead date” to leave.

Be Your Own BFF

You’re going to make mistakes and sometimes look silly—like the time I did an entire show with Russian Red on my teeth. I still have moments when I question myself. During these lows, I try to think: “What’s the worst thing that can happen? Even if I fail miserably, it’s life experience and a great story for my future grandkids.” I also try to think about how far I’ve come since I was that newbie host. I imagine whispering in her ear: “One day this will all be worth it. One day you’ll get backstage bear hugs from Jason Momoa.”