Could prioritizing the happiness of women save the world? 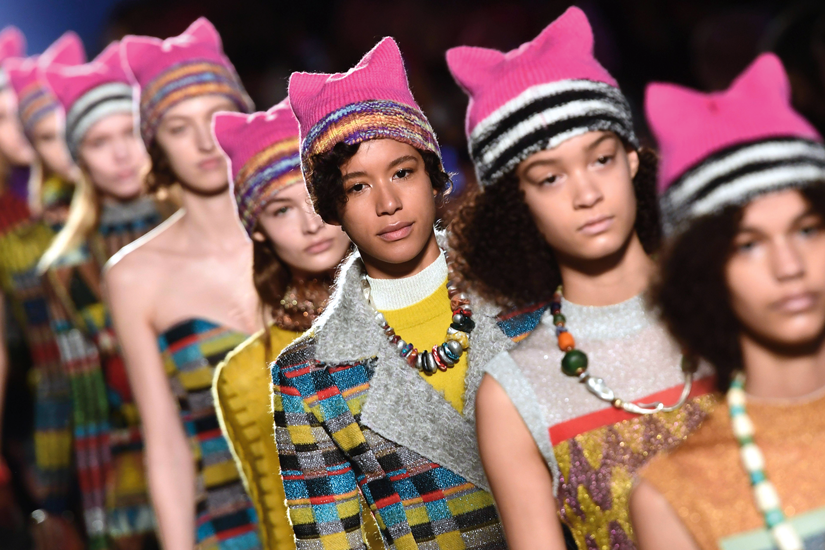 When Jill Filipovic’s book, The H-Spot, landed on my desk, it was mid-winter – literally and metaphorically – and its subtitle, “The Feminist Pursuit of Happiness,” caught my eye like the fluorescent pink of a certain kind of knitted kitten hat in a landscape that was depressing, disheartening and plain terrifying for anyone who wasn’t a wealthy Caucasian man. (Love your work so far, 2017. JK.)

I flipped the sunny-yellow advance copy over and, reading the back blurb, found the general premise of this American journalist’s book equally appealing: If governments prioritized the happiness of women, the world would be a better place. “What a simple, straightforward ‘Like, duh’ idea,” I thought. Oh, what an innocent and privileged little moron I was.

You see, as I began reading Filipovic’s exhaustively researched book (and doing more investigating of my own), it felt a bit like soaking a new vintage dress just to get out a few weird brown stains and then watching it dissolve into putrid garbage, go up in flames and have bats fly out of the smoke-belching inferno and then have that mess transform into the meanest, scariest of Mogwais. Why? Well, the more I read, thought and talked about this, the more it became clear that we live in a world that is not only not putting the well-being of the female sex first but also actively working against it. (And that was before I read a new World Economic Forum report that contends that, best-case scenario, the world is 170 years away from true gender equality; indeed, we are currently moving backwards.)

When I reach Filipovic on the phone a few weeks later, she summarizes it this way: “The idea that women are entitled to pleasure and happiness is not complicated, but there are so many ways, big and small, in which that notion is demonized and denied to women.” (Some examples that Filipovic cites in her book: the built-in idea that to be female is to sacrifice, the constant denial and policing of women’s indulgences in everything from food to sex to opinions, and what she describes as “a soft hum of fear” that accompanies a life lived in a female body.) “Trying to make women equal in a system built by and for men is never going to work,” explains Filipovic. “The system is rigged in favour of men because they made it – and a certain subset of men made it: white Christian men with money.”

READ MORE: How women-only working spaces are changing the way we do business

That’s right: In order for women to achieve true happiness, we basically need to dismantle the entire foundation of Western society. “The problem isn’t that the things that make women happy are so different from what makes men happy,” says Filipovic. “The problem is that our institutions, workplaces and political universe are structured to enable men to realize those things more easily than women. Men have this kind of backing to pursue their own happiness, much of which is built on invisible and free female labour,” says Filipovic.

Filipovic keeps her definition of “happy” as broad as possible, including higher-level happiness, like the feeling of purpose, and more hedonistic pleasures, like a delicious meal and pleasurable sex. It should also be noted that she acknowledges her privileged position as a white woman from a large city and includes the perspectives of American women from different socio-economic and cultural backgrounds in her book, such as the story of Janet, an older African-American woman living in North Carolina and caught up in poverty’s relentless grind: “I missed my [eldest’s] first two years…I wasn’t even there when she started walking because I was working two jobs. It hurts.” (Janet saw her next daughter’s first steps, but that’s because she was unemployed. Interestingly, Filipovic points out elsewhere in the book that “stay-at-home moms” are actually more likely to be poor and lacking a high-school diploma than affluent and well educated, and, in fact, only 5 percent of that group have master’s degrees and a family income of more than $75,000.)

Many of the problems that Filipovic points out are, at their root, structural social attitudes, so I was curious as to why she points to changing laws and government policies as a solution to gender equality. Can we really legislate the kind of deep, internal change these issues require? “One thing we can do is remove the institutional barriers that block women from behaving as sole human beings as opposed to sacrificial do-everything-else-for-others types,” she says. She cites maternity leave as an example: Even when maternity leave is legislated (it isn’t in her home state of New York), its focus on mothers reflects the societal belief that caring for children is women’s work. The fix? A policy more like Sweden’s, which incentivizes both parents to take leave. (Canada recently extended parental leave to 18 months, albeit with the pre-existing 12-month benefits spread out over the duration.) Given that Filipovic is American, many of her examples reflect the realities of life in the United States. So what about us here in Canada, with our openly feminist prime minister and relatively progressive policies?

READ MORE: Every feminist moment on the runways this fashion month

Enter Lauren Ravon, director of policy and campaigns at Oxfam Canada. The development organization, which focuses on advancing women’s rights domestically and internationally, recently released its first annual Feminist Scorecard, which tracks how well our current Liberal government is doing at fulfilling its promises across eight areas, including, for example, representation, jobs, care work and violence against women. Ravon says that overall – and given they’ve only been in office a year – the government is headed in the right direction, with just one area labelled a “red flag”: work.

And here’s where “intersectionality” comes into play. This is the idea, first popularized by the scholar Kimberlé Williams Crenshaw, that different forms of oppression – like racism, sexism and classism – often exist simultaneously and so can’t be ignored or separated. “Intersectionality is why pay equity is only a small portion of our overall assessment of work – because pay equity is very often a middle-class white-woman issue,” explains Ravon. “If you’re poor, a migrant worker or indigenous and you’re making minimum wage and your male colleague is making eight to 10 cents more an hour than you are, you’re both living in poverty. The issue there isn’t pay equity; it’s poverty wages.”

The eight categories Oxfam Canada looked at also intersect, and Ravon explains that progress in one can often come at the expense of another, which is why we need to “connect the dots.” “You can create jobs for women in one sector, but if you’re not investing in child care, then only women from higher up the socio-economic ladder can access those jobs because they can pay other women to keep their children,” she says.

So what could Canada do today to make a difference for women (and, really, all Canadians)? Ravon’s laundry list includes finally passing pay-equity legislation; boosting our commitment to a national domestic-violence-prevention strategy, which stands at $100.9 million over five years (she says this is “throwing pennies at a problem that costs the economy $12 billion a year”); moving away from a record-low foreign-aid budget (due to the fact that spending enables important work for women in developing countries); and showing what she calls “leadership” on the international stage in the era of Trumpism.

READ MORE: How to deal with “menstruhaters” at the office

Oh, and giving Status of Women Canada more than a piddling 0.01 percent of the federal budget. “It’s one thing to say that our prime minister is feminist, but it’s another to say we’re supporting feminists in Yellowknife or in B.C. – the actual organizing on the ground,” says Ravon. She cites a study about violence against women that was conducted in 70 countries over 40 years and found that the strongest indicator of progress in ending the violence is the strength of the local feminist movement. This rather neatly segues into the story of Catherine Mayer, the author of a new book called Attack of the 50 Ft. Women: How Gender Equality Can Save the World!

In her book, Mayer, who is also co-founder of Britain’s Women’s Equality Party, talks about an imaginary land called Equalia, a paradise in which gender equality has been achieved at last. Mayer confirms that Equalia is, indeed, a happy place. “It seems to me, and the research absolutely backs me up, that the closer you get to a society that allows women to find out who they are and what they’re capable of and enables them to participate fully, it takes the pressure off relationships between the sexes,” she elaborates over the phone from her home in London, England. “It also takes specific cultural pressures off men, creates affluence and ease and should hopefully reduce violence, mental-health problems and all sorts of things.”

But she does issue a caution of sorts about how we define women’s happiness. “It’s very clear that women are sold an idea of what happiness and success look like that is very different from the idea that men are given,” says Mayer. “We are told that we cannot be completely fulfilled and happy unless we are mothers and that there are certain ways of
doing maternity that seem to be very different from the ways in which fathers do paternity.” Essentially: The standards by which women are told to evaluate their relative happiness are fundamentally unachievable.

READ MORE: 10 feminists you should be following on Instagram

Mayer has been busy touring the United Kingdom to promote her book and says that one of the most disheartening things about the experience (and this is coming from a woman who is well versed in Twitter anti-feminist trolling) is the number of men who say they’re buying the book for the lady in their lives. “I’m like, ‘No!’” says Mayer, half laughing. “‘Read it for yourself!’”

It’s not in the book, but Mayer says that lately she has been thinking a lot about the role of men in equality. “In a funny way, men are the silver bullet,” she muses. “The biggest single obstruction to gender equality is a world in which even nice men don’t understand that it’s about them too.”

It’s not just the men who might be a bit “bias blind.” Here’s where we loop back to intersectionality once more: If those legislated solutions, those imposed quotas, those visible women in power largely benefit and reflect the lives of straight middle-class white women, then that’s also part of the problem: a world in which even nice white middle-class women (like me!) don’t understand that it’s about them too.

Every year, the ELLE network conducts a global survey on the subject of happiness, polling over 30,000 women from 44 countries. (NB: The average respondent was between 15 and 34, university educated and employed with no children.) Here are some standout stats:

45% said that money is the one thing that would make them happier. 35% aren’t pleased with their appearance. 79% believe that the lives of women are “improving” in their country. 39% said their greatest source of happiness is their family life. (In Canada, that was 44%.) 30% of Canadian respondents are not involved with any charitable causes. 63% of Canadian respondents are generally happy with the quality of their lives.