Canadian Women Made History at the Tokyo Olympics

The Tokyo Olympics were historic in many ways – especially for the women on Team Canada. 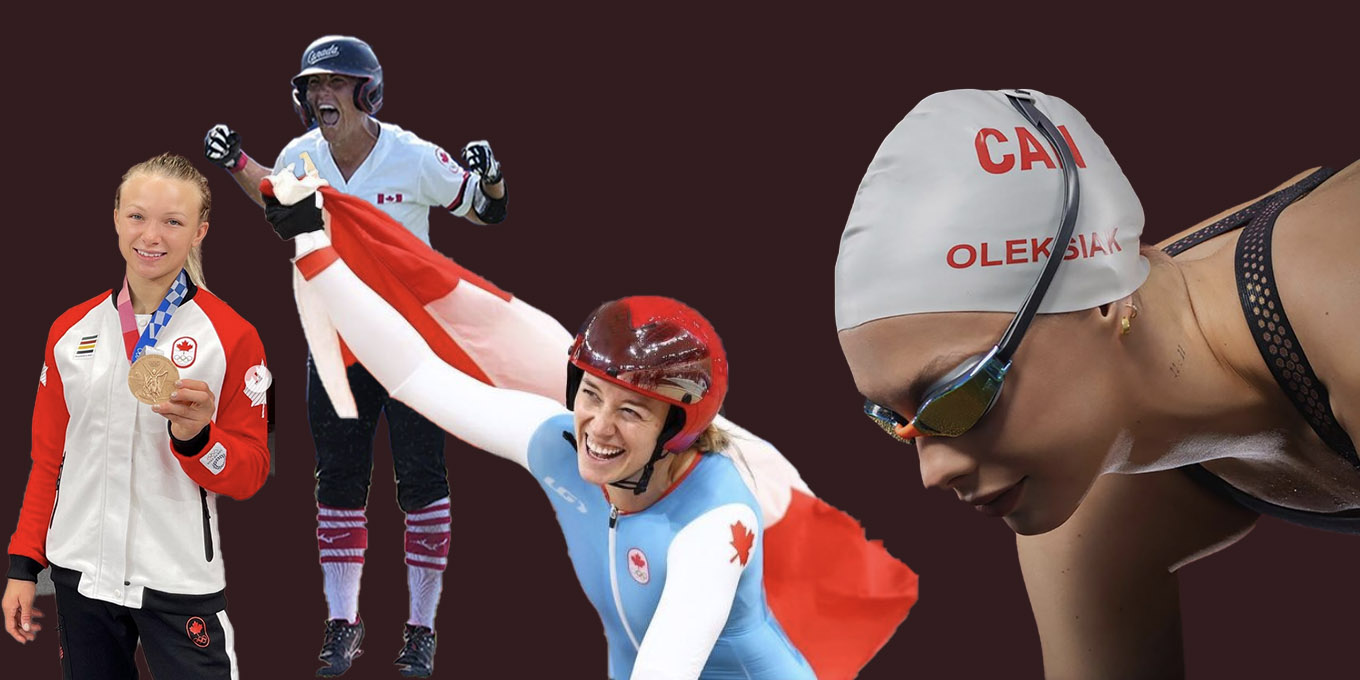 Team Canada won a total of 24 medals over the course of the multi-week event (that’s seven golds, six silvers and 11 bronzes, for those who are counting). Even more impressive? It’s the most medals Canada has won at a non-boycotted summer Olympic Games, and we’ve even matched the record for most gold medals (Canada also won seven at the 1992 games in Barcelona).

Canadian women athletes also made headlines throughout the Tokyo games, with much cause to celebrate. They won the nation’s first 13 medals (yes, you read that right), and by the time the Olympic flame had been extinguished, they were responsible for an incredible 18 of Canada’s total medals. There’s been plenty to celebrate over the last couple of weeks. Here, we take a look at some of the awe-inspiring records Canadian women set at the Tokyo Olympics.

21-year-old swimmer Penny Oleksiak was one of the biggest stories of the games. She brought back home three more medals to her ever-growing collection. Her first was a silver in the 4×100-metre freestyle relay, alongside fellow teammates Kayla Sanchez, Maggie Mac Neil, Rebecca Smith and Taylor Ruck. Then came bronze in the 200-metre freestyle — her sixth-ever Olympic medal, earning her the honour of Canada’s most decorated summer Olympian. Not content with that record, Oleksiak upped her game yet again, winning bronze in the 4×100-metre medley relay with Mac Neil, Kylie Masse and Sydney Pickrem. Her seventh medal makes the star athlete Canada’s most decorated Olympian of all time.

Speaking of swimmers, Maggie Mac Neil also went home with three medals. Her solo one came during the 100-metre butterfly, which landed her at the top of the podium and marked Canada’s first gold of the Tokyo Olympics.

In case you needed further evidence that Canadian women dominated in the pool, look no further than Kylie Masse. She also won three medals, picking up a silver in 100-metre backstroke and another in 200-metre backstroke. During the latter race, her whip-fast time of 2:05.42 set a Canadian record in the event.

We’d be remiss not to mention 14-year-old Summer McIntosh’s efforts at the pool, even though she didn’t actually leave Tokyo with a medal. She was the youngest person on the Canadian Olympic team this year, and captured a lot of attention for her obvious talents. She even set multiple Canadian records thanks to her speedy times in the 400-metre freestyle, 800-metre freestyle and as a member of the 4×200-metre relay. Keep an eye out for her at Paris 2024.

A post shared by Spirit of Judo Magazine (@spiritofjudomagazine)

Quebec’s Maude Charron lifted a combined total of 236 kilograms in the 64-kilogram weightlifting competition to win Canada’s second gold medal in Tokyo. It’s also only the second gold Canada has won in weightlifting. Christine Girard was the first at London 2012 (in the 63-kilogram division), though she only actually received her medal in 2018 after her two competitors retroactively tested positive for performance-enhancing drugs.

Canada’s women’s eight rowing crew were the fastest in Tokyo, landing them on top of the podium and earning the nation’s first gold in the event since the 1992 Barcelona Games.

Also on the water, Laurence Vincent Lapointe earned her place in history when she came in second in the 200-metre canoe sprint – the first time women have been allowed to compete in the event at the Olympics. Later on, she and teammate Katie Vincent won bronze in the women’s doubles 500-metre canoe sprint, also the first-ever Olympic podium for the event.

With her bronze-medal victory in the women’s keirin, Lauriane Genest became the first Canadian in the event, and only the second Canadian woman to medal in an individual Olympic track cycling event.

Alberta’s Kelsey Mitchell won Canada’s last medal of the Tokyo games – and she made it golden. The athlete landed on top of the podium in the track cycling sprint, becoming the second Canadian ever to win Olympic gold at a track cycling event.

If you’re still feeling the rush of the Canadian women’s soccer team’s gold-medal victory, you’re not alone. After winning back-to-back bronze medals in 2012 and 2016, the team arrived in Tokyo, led by Canadian athletic icon Christine Sinclair, with the mission of changing the colour of their medal, and they did just that. To do so, they came out on top against the U.S. in the semifinals – the first time the soccer team has defeated their rivals in 20 years. The gold-medal game ended up going into a nail-biting round of penalties, in which 20-year-old Julia Grosso scored the winning goal, securing Canada’s first gold in a summer team sport in 113 years.

Also historic about the win: as a member of the squad, Quinn became the first-ever openly trans and non-binary athlete to earn an Olympic medal.